The 2019 Veloster Turbo is one of the more exciting models of Hyundai Philippines. Armed with sharp looks and 201 horsepower, while keeping its traditional (and rather quirky) styling, this hot hatch has been eye candy for car enthusiasts and motoring journalists alike since its launch, more so, when its second-generation model made it locally. I, for one, is excited to drive the all-new model (which I will, pretty soon) and being able to review its predecessor before just adds fuel to that flame.

But admittedly, there is still room for improvement in the turbocharged Veloster. That is, if you want to go head to head against other hot cars like the Honda Civic Type R or maybe the Subaru WRX STI.

That’s where the Veloster N comes in, and apparently, one unit was sold in the Philippines with a yellow conduction sticker. See photos below. 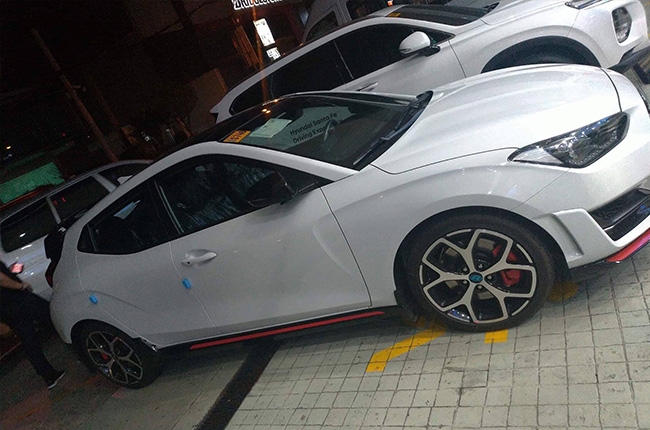 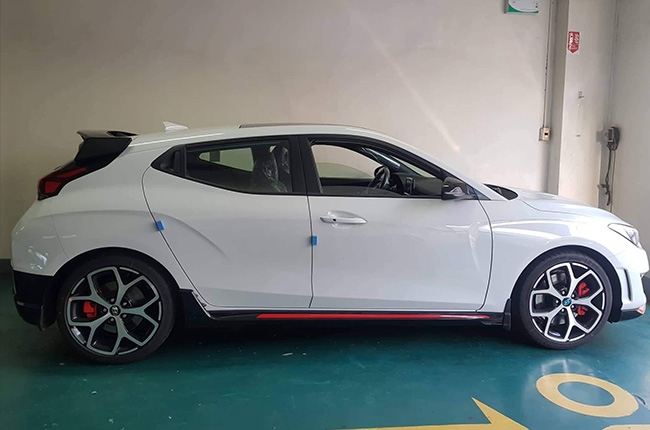 These photos of a Philippine-spec Hyundai Veloster N was sent to our friends in Go Flat Out. According to their scoop, this white Korean hotter hatch was sold to a customer by Hyundai Pasong Tamo.

To differentiate the hotter N variant from the standard Veloster Turbo, you would only need to look at the red accents found at its front fascia and side skirts. The rear, on the other hand, features a bigger wing while its 18-inch rims carry a different design. Inside, the Veloster N is showered by Hyundai N Division’s official blue color.

And of course, look for the N badge, which stands for Namyang and Nurburgring – the latter being the dreaded German race track to which the Veloster N is “thoroughly honed” for. However, what largely separates the Veloster N from the normies is its turbocharged 2.0-liter engine found inside its bonnet that can produce a healthy 250 hp and 353 Nm of torque. In comparison, the regular Veloster Turbo is powered by a 1.6L engine with the aforementioned 201 hp and 265 Nm of torque. What’s even better with the N variant is that it comes with a six-speed manual, as opposed to the seven-speed dual-clutch automatic transmission of the standard Veloster.

The reader who sent the photos to Go Flat Out also disclosed that the Philippine-spec Veloster N has a price tag of P2,058,000 – just P260,000 more than the initially-available Veloster Turbo.

We asked our friends from Hyundai Philippines about this news and they confirmed that they are indeed selling the 2019 Veloster N, albeit, as an indent/special order only. Good times.