Surprised after reading the headline? Perhaps, in doubt and raising an eyebrow? As crazy as it sounds, it is actually true – at least, according to Nissan Asia & Oceania’s new study. With concern to public health, traffic noise is now considered as one of the major threats. To address the issue, Nissan Asia & Oceania conducted a sound measurement experiment aimed to raise public awareness.

The World Health Organization (WHO) supports this claim by stating that long-term exposure to noises above 53 decibels (dB) may result in serious health conditions. It could lead to elevated blood pressure, coronary artery disease, hearing loss, and even heart attacks. These conditions aren’t the typical conditions you can just ignore, and so this issue.

You’ll be surprised to know that environmental noise levels in some major cities in Asia & Oceania have at least four times louder than the recommended numbers – 76 dB (alarm clocks are at 80 dB). Numbers this high are scientifically proven to bring the risk levels of acquiring alarming health conditions higher. Traffic noise is also a contributing factor to road rage, as well as accidents caused by loss of focus due to your cognitive performance getting compromised. To understand this better, you must read our article about how our brains work whenever we drive. 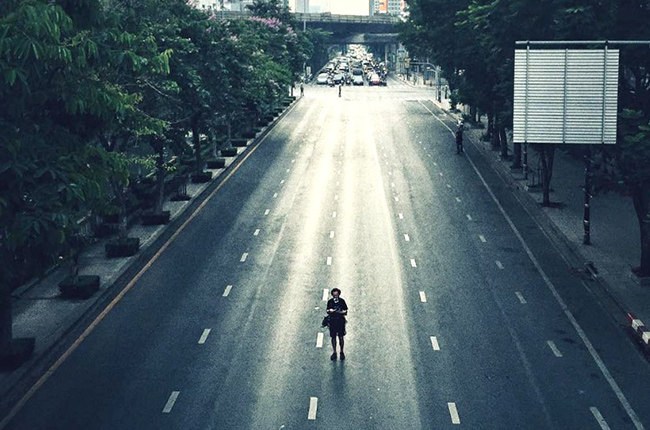 We know it’s too much to read; how can we avoid environmental noises anyway? We live in a country where point A to point B isn’t as simple as it sounds. Buses, jeepneys, and some other private vehicles change lanes without a single warning. We’re quite sure everyone hears at least 10 loud and long car horns on a daily basis. So, to educate us in a more creative manner, Nissan used the LEAF’s emitted noise and compared it to the sound levels of a standard busy city street. Nissan uses a sound level meter.

The results were astounding; the sound level on a busy street peaked at about 90 dB, while the LEAF’s engine only measured 21 dB. That’s even quieter than a typical library, which sound levels are at 30 dB, imagine that. With this, Nissan believes that EVs are a viable option in reducing traffic noise, which will eventually lower the risk of serious health complications.

“The rate of urbanization in Asia is set to increase, making noise pollution an important issue that we can unite to reduce. As this small test indicates, 100% electric vehicles like the Nissan LEAF’s zero emission, quiet engine has the strong potential to positively improve environmental concerns for societies in Asia and Oceania.”
Yutaka Sanada
Nissan Asia & Oceania regional senior vice president