Electric vehicles (EV) are not the most popular type of transport in the Philippines – at least, not yet. That's basically because they‘re priced double or triple of a gasoline or diesel car. However, the level of the carbon footprint we have today suggests that the country really needs them. So, where do we place ourselves?

Fortunately, the matter has been discussed during the ribbon cutting of Unioil's second Fast Charging Station in Guadalupe. Although we’re a bit late compared to the other parts of the world, EVs, Plug-in Hybrid Electric Vehicles (PHEV), and hybrid units are now being locally introduced one brand after another. So, the need for such charging stations is also slowly coming in. "It is about time that the Philippines recognize the use of EV as a more environmentally-friendly mode of transport. The expansion of the EV sector is an essential foundation to the transportation development of the nation."
Atty. Jay Layug
Former National Renewable Energy Board chairman

To comply to this transition, the petroleum company has taken their part of establishing its first EV charging facility at Unioil Congressional Avenue Extension in Quezon City. Now that they've opened their second one at Unioil EDSA Guadalupe Station (northbound side), EV owners around the area may now charge their units conveniently and, take note, for free. In the meantime, of course. 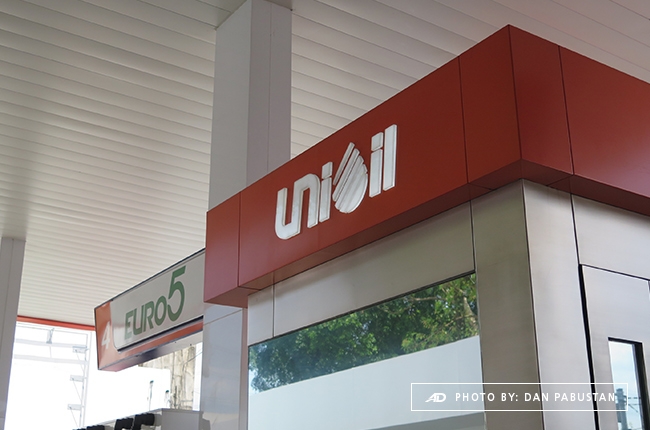 The charging station features three different types of charger nozzles: CHAdeMO, CCS, and Type 2 chargers. For your convenience, we'll give you the seven easy steps on how to use Unioil's EV Fast Charger so you don't have to worry about your first time.

Also, remember not to disconnect when the charging process is still in process. Water on the connector is dangerous and could pose a risk of electric shock. So, do not touch the connector once charging has begun.

In support with Unioil's initiation, Senator Sherwin Gatchalian was present in launching the new EV charger. He stated that, rest assured, legislation of a law to promote EV charging stations is already on its way. Gatchalian also said that the prices of EVs and traditional cars will be on the same level by 2025. This way, more Filipinos could afford to have an electric car, leading to a lower carbon footprint. We just have to wait seven more years or so. Apart from the Fast Charging Station, Unioil has an active campaign that encourages Filipinos to initiate actions that would lead to a cleaner and greener Philippines. Known as Doing Our Part, the campaign introduced Unioil's Euro 5-compliant fuels for a better alternative. A test conducted by the Department of Natural Resources (DENR) and the Environmental Management Bureau (EMB) revealed that Euro 5 fuels have 77% less emission compared to Euro 4 ones.

Meanwhile, for Unioil patrons, you could have various perks through its Loyalty Cards. Classic Loyalty Card owners could save points as they fill up with the Euro 5 fuels. One point is equal to the P200-worth of Euro 5 fuel and lubricants. A 100-point bonus will also be given to those who would accumulate P4,000 purchases in a month.

GCash holders, on the other hand, are subjected to a 10% cashback when paying with GCash QR at participating Unioil stations. Do mind though that it is capped at P100 per unique customer at a particular store per day. S&R members are also in for sweet discounts. Just present your S&R Membership card and get a P3 per liter discount on Euro 5 gasoline and P2 for Euro 5 diesel.