Hatchbacks in the Philippines are slowly becoming a dying breed due to increased interest in crossovers. While a few manufacturers out there have kept hatchbacks going, their models are slowly becoming long in the tooth. One such brand that has recently updated its popular hatchback is Honda Philippines. While it discontinued the Honda Jazz nameplate, what replaced it is its spiritual successor in the form of the Honda City Hatchback.

This now begs the question, will the new Honda City Hatchback live up to the expectations that were set by its predecessor the Jazz, or will it continue to what it started but further evolve its functionality and versatility?

Performance
Engine Output (HP), Acceleration, Transmission, Handling 4.5/5
Design
Exterior & Interior Design, Quality, Fit and Finish, Ergonomics 4.0/5
Ride Comfort
Cabin Comfort, Suspension, NVH Insulation 4.0/5
Safety and Technology
Convenience Technologies, Active and Passive Safety Features 4.0/5
Value for Money
Amount of the vehicle you get for the price, Fuel Efficiency 4.0/5
What You Will Like
What You Won't Like
How We Do Our Reviews It pretty much the same looks as its sedan counterpart the Honda City, where the hatchback differs from its namesake when it comes to the grille and the bumper. These have been altered slightly to adapt to a sportier design. Like the City, the City Hatchback also comes with a full complement of LED lighting which is great, especially for its price point. You also get the smooth and sporty lines of the sedan along with its sloping hood.

Moving on to the side and it’s just like the sedan again with the same body lines up until you get to the d-pillar where they differ. You can immediately tell that the roof has been cut at a weird angle to fit the hatch mechanism at the back, but it works like the lines of the hatchback wrap around the body to create a rounded-off look at the rear. Entering the City Hatchback is a similar experience to that of the Honda City RS. You get a modern dashboard design, tall air vents, red accents found on the steering wheel, and seats for that extra sporty appeal. Aside from this, the Hatchback also comes with blacked-out aircon vent accents to help distinguish it from its sedan counterpart.

Just like the sedan, its seating material is fabric, however, it is supportive and comfortable. The red accents on the seats also help uplift the interior and add a bit of contrast to it. You also get single-zone automatic climate control along with easy-to-use controls that make the user experience just that easier.

The very useful trick that the City hatchback hides under its belt is its second row. These can be folded to create a completely flat floor which does wonders for cargo space. On top of that, they can also be folded upwards into the car’s “tall mode” to accommodate taller items. This makes it very versatile for storing items that would not otherwise fit inside the luggage compartment of the vehicle. Aside from this you can also fold the front seats of the car and turn the vehicle into a lounge simply by removing the headrests. Overall, Honda has designed the City Hatchback well to suit different needs while maintaining its compact form factor. 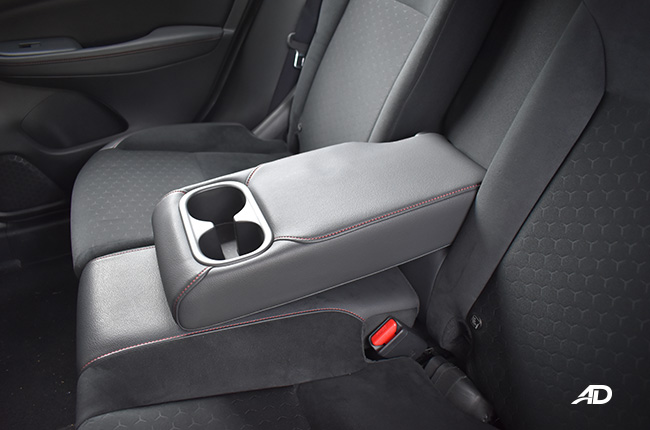 Comfort inside the Honda City Hatchback is yet again comparable to its sedan counterpart. The seats are soft yet supportive and by default come with a decent amount of back support which is great for long drives. The suspension is soft enough to keep the bumps at bay, while still being stiff enough to give you a sporty ride when you want it.

This also applies to the passengers at the back who will experience the same level of comfort as those at the front. One thing to note, however, is that due to the transmission tunnel at the back and a bumper in the second-row seats, the hatchback is better suited for four passengers instead of five. In terms of technology, the Honda City Hatchback comes with 8-inch infotainment that comes with Apple CarPlay and Android Auto. Aside from this, a hands-free telephone (HFT) with voice recognition is also available for the sole RS model. An 8-speaker sound system is present in the hatchback which comes in the form of a 4-speaker and 4-tweeter layout.

The hatchback also comes with an automatic air conditioning system that comes with rotary knobs and a digital display. Rear ventilation is also available for better cooling access to the occupants at the back.  For indicators, the Honda City Hatchback comes with a tachometer, speedometer, fuel level, fuel consumption meter, trip meter, range computer, temperature, and illumination control.

It also comes with cruise control and a multi-view camera as standard. A one-push start system is present in the vehicle along with a Smart entry. To help with charging mobile devices, the Honda City Hatchback also comes with two 12-volt sockets located towards the front of the vehicle. The safety features on the Honda City Hatchback are the industry standard, it comes with driver, front passenger, side, and curtain airbags as standard. It also features a G-CON body structure to help protect its occupants in the event of a crash along with vehicle stability control, hill start assist, ABS with EBD, and emergency stop signal. As standard, the Honda City Hatchback comes with 3-point ELR seat belts for all occupants along with a seatbelt reminder for the driver and front passenger. Other safety features for the vehicle include, power door locks with speed-sensing with auto-lock, a child lock protection system, ISOFIX child seat anchors, a knee bolster for the driver and a security alarm with an immobilizer system. In terms of driving and handling the Honda City Hatchback has a noticeable lag when it comes to its turn-in. While it could be attributed to the unit being a little bit old, it's noticeable, especially against the Honda City sedan. Aside from this, it handles well as the chassis has been stiffened compared to its sedan counterpart. This gives it an excellent road feel through the steering wheel and great handling characteristics as well thanks to the tech that Honda has put into the chassis.

There is a bit of lag when it comes to the CVT as it lacks the quick get-up and go for a traditional automatic. If you feed the accelerator carefully and in a smooth manner the hatchback will get up to highway speeds fairly quickly and without any hassle. 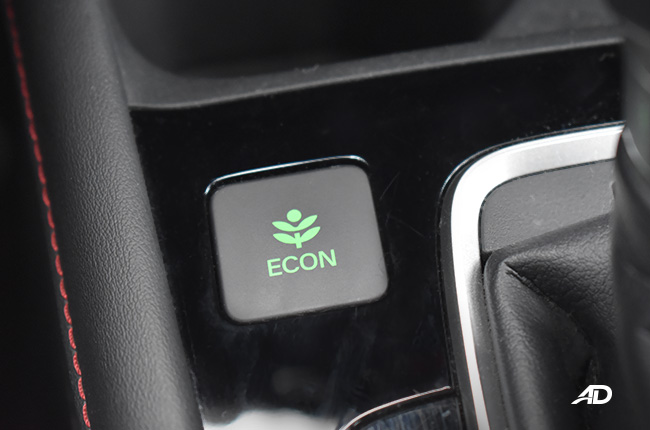 The Honda City Hatchback is priced at P1,125,000 for its RS model and P1,145,000 if you choose to get it in a special color. That being said it is a bit of a tall task especially against its sedan counterpart which comes with more affordable pricing. Coupled with the fact that the Honda City Hatchback is only available in one variant makes it a difficult sell for those who miss the affordability of the Jazz and the number of variants that it once had.

All things considered, the Honda City Hatchback does well to live up to those who were waiting for a worthy successor to the Honda Jazz. It continues the flexible seating of the older hatchback and adapts it to modern times well. On top of this, the hatchback also comes with a great amount of usable tech that many buyers will appreciate. The fact that it also comes with rear vents will be a big help, especially in a tropical climate. It achieves its goal of being slightly different from its sedan counterpart by being a great versatile hatchback that comes with many possible uses. 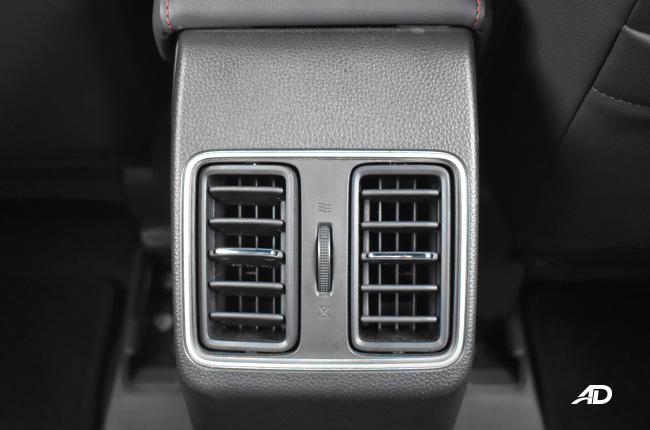 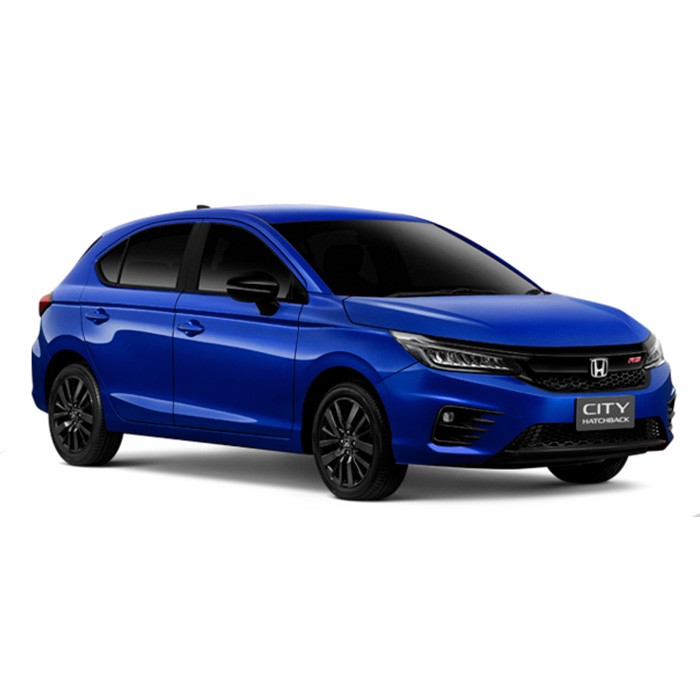 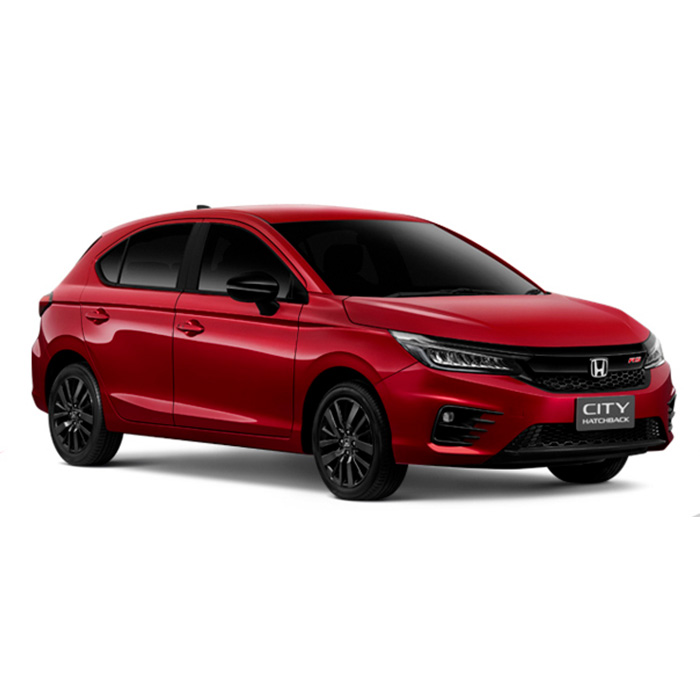 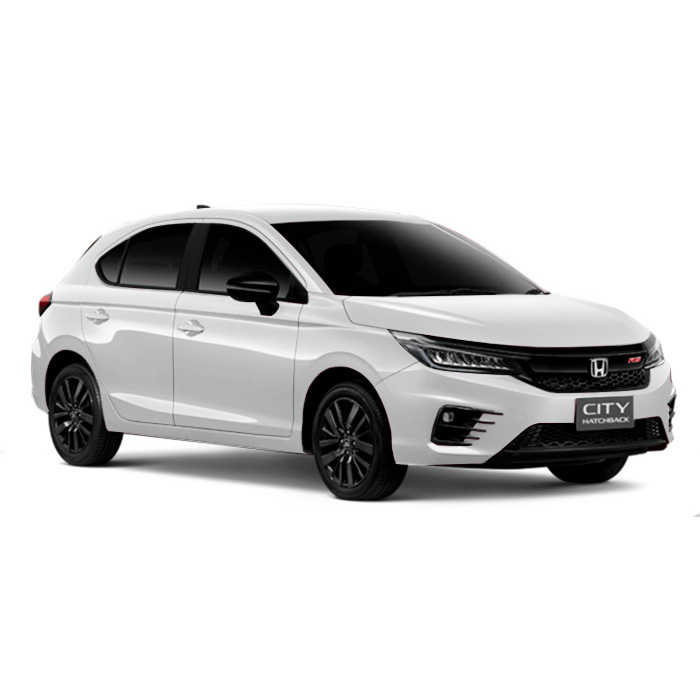 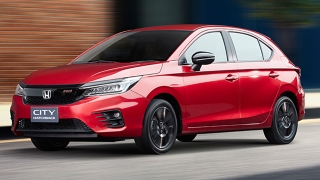