Remember how I said I wasn’t a huge fan of pickups? Well, apparently, I’ve been handed the keys to several of them in succession. To be honest, I think they’re growing on me. This time, I had my hands on a vehicle from an almost ubiquitous Japanese truck manufacturer. We all know Isuzu as one of the greats in the local automotive industry. Since its presence in the 1950s, Isuzu has created a reputation for building solid chassis and dependable diesel engines, meant to cater to businesses and the working class that need a dependable workhorse. 1995 saw the official incorporation for Isuzu Philippines, and those who grew up in the ‘90s would remember the Hilander/Crosswind, Trooper, and N-Series trucks; with many families having one in their garage or business. Isuzu’s products lineup was always true to its slogan, being reliable partners for those who depended on them.

Performance
Engine Output (HP), Acceleration, Transmission, Handling 4.0/5
Design
Exterior & Interior Design, Quality, Fit and Finish, Ergonomics 3.5/5
Ride Comfort
Cabin Comfort, Suspension, NVH Insulation 3.5/5
Safety and Technology
Convenience Technologies, Active and Passive Safety Features 3.5/5
Value for Money
Amount of the vehicle you get for the price, Fuel Efficiency 4.0/5
What You Will Like
What You Won't Like
How We Do Our Reviews
Related: Isuzu PH gives back to OFWs with Kababayan Promo cash discounts A workhorse would generally mean that the vehicle is powerful, versatile, and easy to get along with. But now, more than ever, powerful doesn’t necessarily mean a huge engine anymore. With further advances in forced induction, we’ve seen the rise of smaller engines that still create respectable power. That’s exactly what the 2018 Isuzu D-Max 1.9 RZ4E LS 4x2 AT Blue Power was telling me as I clocked in almost 600 kilometers with it on as many types of roads as possible.

Having experienced the 2018 Isuzu D-Max for the first time during a media drive to La Union, highlighting the fuel efficiency and road trip capabilities of the pickup, Isuzu’s range of RZ4E Blue Power engines offered a lot of promise. The range of 1.9L and 3.0L engines offered a good range of options among its lineup, and the numbers were impressive. 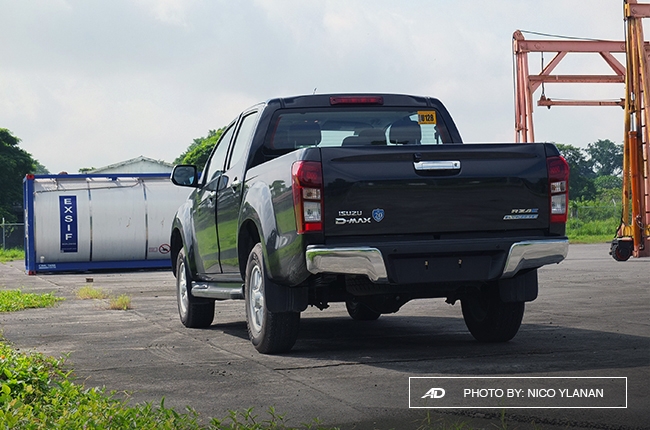 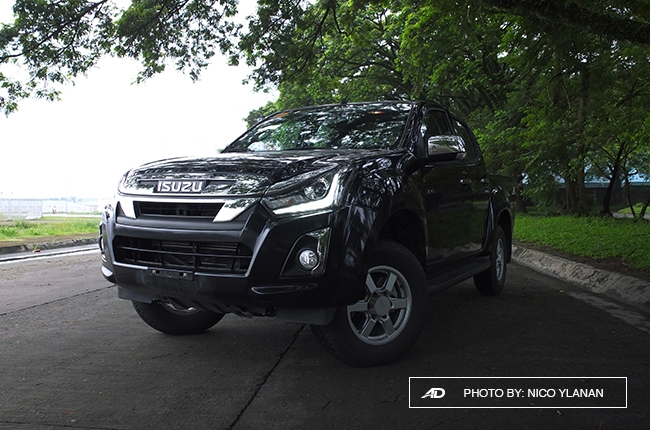 At first glance, you’d be hard pressed to really tell the difference between the 2018 Isuzu D-Max 1.9 LS trim and the bigger 3.0 LS. You still have the same front fascia with chrome bits, and foglights are standard. The running lights are identical, as well, and the step board and LED taillights all carried over from the bigger siblings. The only thing that might give it away, aside from the badges at the rear, are the smaller set of 16-inch wheels. So for the most part, there was no exposing the fact that I was driving the pickup with one of the smallest engines in the country.

It’s the kind of pickup that would attract those looking for something with less fluff, as it is handsomely all-business and understated. It’s honest, and I like that. I’d also like to point out that the 2018 Isuzu D-Max has a bed that’s wider than most, but shorter, too, so anything longer than a scooter will have you hanging a warning device when transporting cargo. There’s also the lack of a bed liner, but the addition of hooks for tie downs or straps is nice. Bonus points for the projector headlights, as the light output was impressive. 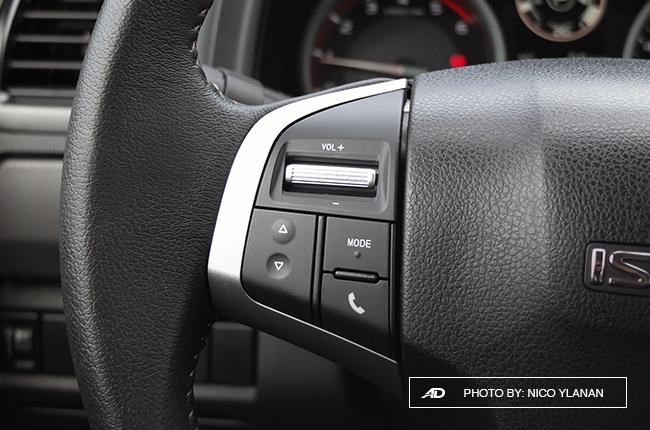 Step into the 2018 Isuzu D-Max and you’ll see some small improvements to make it a more comfortable place to be in. They’ve added leatherette trim pieces to the top of the instrument cluster and front passenger dashboard. There’s even contrasting stitching, which is a nice touch. The head unit has been replaced by an 8-inch touchscreen, and its feature packed and responsive enough to get your phone linked up with little fuss. There’s even a reverse camera with parking sensors.The knobs and controls are mostly a plastic affair, but everything is laid out in a logical and easy manner. There’s a good number of ports scattered around the cabin for charging devices, two up front and one in the rear for passengers. The seats are fabric and are fairly supportive, and there’s even a good number of storage areas and cupholders. Overall, a nice interior that serves its purpose. The inside does suffer for blank button syndrome, but maybe that’s just me. 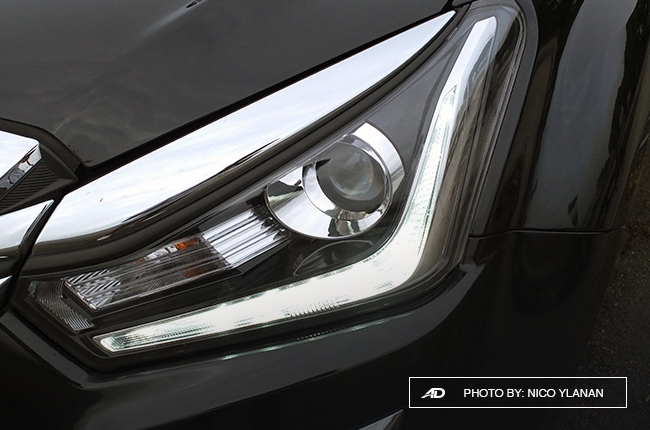 On paper the 1.9L RZ4E turbo diesel engine makes 148 hp and 350 Nm of torque, good numbers in general, and even better when compared to the older and bigger engine (which was at 134 hp and 320 Nm of torque). This power plant is mated to a six-speed automatic transmission, and, oddly enough, the 3.0L higher spec variants get a five-speed. I have to hand it to Isuzu, though, as its six-speed automatic is on the ball, as it shifts pretty smoothly and even downshifts when engine braking is needed.

For a 1.9L engine, the 2018 Isuzu D-Max rarely felt underpowered. Throttle response was sharp, and it would take little prodding to get the truck moving at a good pace. The rush of power comes in above the 1,800 rpm mark, and it's a steady and brisk climb to triple digit speed limits, meaning highway merging is done in relative ease. At the speed limit, the engine settles at around 2,300 rpm, and some noise does get into the cabin. But that’s usually the case with most pickups and diesel engines. In the city, the 2018 Isuzu D-Max makes a strong case, as the small engine still produces more than enough power for daily usage, making you wonder why some need more displacement. Even in traffic, the engine is efficient, and gave us a value of 13 km/l. On the highway, expect numbers higher than 20 km/l when driven at 80-90 km/h. Numbers like those make the 2018 Isuzu D-Max one of the most fuel efficient in its segment, if not the most frugal as of this writing. 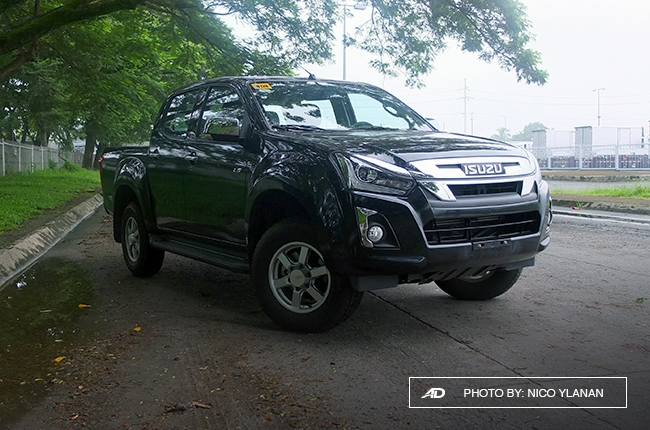 In terms of comfort and road manners, the 2018 Isuzu D-Max fairs well for a pickup truck. There’s always going to be the issue of bumps and road imperfections that can be a bit jarring for the rear, especially when you are by yourself or without cargo. The steering can also feel a bit too vague at times, especially at city speeds.

On the highway, it’s pretty planted and stable. Of course, body movement is present, but not as bad as other pickups I’ve driven, where the front dives or lifts a lot under braking or accelerating. Corners are handled decently, but understeer rears its ugly head very easily. But this is all consistent with its competitors, anyway. You’re not buying a pickup to attack corners, but to use as a cargo vehicle or daily driver with work flexibility. Once you get used to how a pickup drives, there are ways to mitigate the effects of the chassis. Smooth and predictable acceleration and braking is the key. While the 2018 Isuzu D-Max can feel a bit harsh, there are also instances where it rolls over certain road imperfections, like rumble strips and speed bumps, with little complaint. 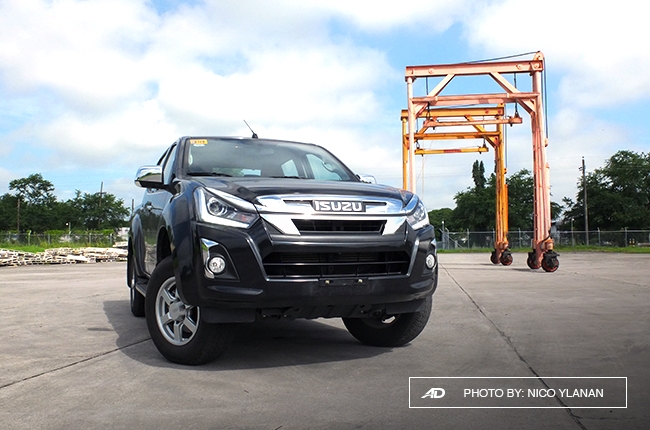 In closing, the 2018 Isuzu D-Max 1.9 RZ4E LS 4x2 is a solid performer for the price of P1,249,000. The combination of a good performing engine combined with a solid set of features creates a pickup that hits the sweet spot, especially in regards to fuel efficiency and versatility. If you’re looking for a pickup to perform daily tasks and still be ready to haul, you’ll find a reliable partner with the 2018 Isuzu D-Max 1.9 RZ4E LS 4x2.