More than a year ago, the sketches of the new Picanto that circulated the motoring beat caught our attention. It had red accents all over, a sportier aura, more defined character lines, and Storm Trooper-ish fog lamps at the corners of its lower grille — these made us wish that the production model would turn out the same. And, boy it did.

Kia Motors has introduced the top-of-the-line GT Line variant of the third generation Picanto, and eventually made its way locally. Although it didn’t arrive to the Philippines with the Turbo variant, we still wanted to get our hands on it instantly for an in-depth review, and maybe play around with it a little.

Well, Kia Philippines must have read our minds, and handed us the keys of their hot-looking hatch.

Performance
Engine Output (HP), Acceleration, Transmission, Handling 3.5/5
Design
Exterior & Interior Design, Quality, Fit and Finish, Ergonomics 4.5/5
Ride Comfort
Cabin Comfort, Suspension, NVH Insulation 4.0/5
Safety and Technology
Convenience Technologies, Active and Passive Safety Features 3.5/5
Value for Money
Amount of the vehicle you get for the price, Fuel Efficiency 4.0/5
What You Will Like
What You Won't Like
How We Do Our Reviews The Kia Picanto is already an eye-pleaser even without the GT-Line treatment. So it isn’t a surprise that the face of the range-topping variant looks a lot better than its segment competitors such as the Toyota Wigo and Mitsubishi Mirage. In fact, I, with my willingness to commit professional suicide, claim that this car is the best-looking mini subcompact hatchback out there.

One of the best things I appreciate with the Picanto GT-Line is its sweptback projector headlamps with LED daytime running lights. It made the car look aggressive; quite a huge leap from the bug-eyes of its predecessors. Although it still looks like a bug, it’s now meaner and angrier, telling you that it’s not a car to mess around with. The red accents on the car's body are a welcome feat. They complement the Clear White body color, adding attitude to the Picanto’s overall demeanor. The bumpers and side skirts give an impression that it’s a fast car, even when standing still. The 15-inch alloy rims looks like a Celtic cross, which is unique and isn’t boring.

The Picanto’s rear is gifted with C-shaped LED taillights that look really good at night. It also has twin tailpipes — although they are actually just a single exhaust with two exits, but who cares? It’s a nice touch. When it comes to the interior, it’s a mix of emotions for me. It’s full of novelties that you won’t normally see in cars in its segment: (1) blue leather door handles and center compartment with contrasting stitches; (2) body color accents at the door, air-conditioning vents, and around the gear-shifter; and (3) the faux-leather gear knob with glossy black design at the center.

The cabin feels upmarket in its display of intricately-designed fabric seats with leather lining — kind of reminiscent of the Mini Countryman’s interior. If you have keen eyes for detail, you’ll definitely love how Kia designed the Picanto’s cabin. However, there are some things that I wish are present inside like vanity mirrors on the sun visors and a display head unit. The latter is a bit of turnoff, considering its competitors’ stereo systems are getting bigger and more advanced. It’s something that could have been a crowning glory to the car’s interior. Good thing, smartphone is easy to connect via USB and Auxiliary input, and the speakers sound decent.

Also, the Picanto has features like automatic headlamps, power-folding side mirrors, and speed-sensing door locks that pretty much make up for the lack of a touchscreen display head unit. 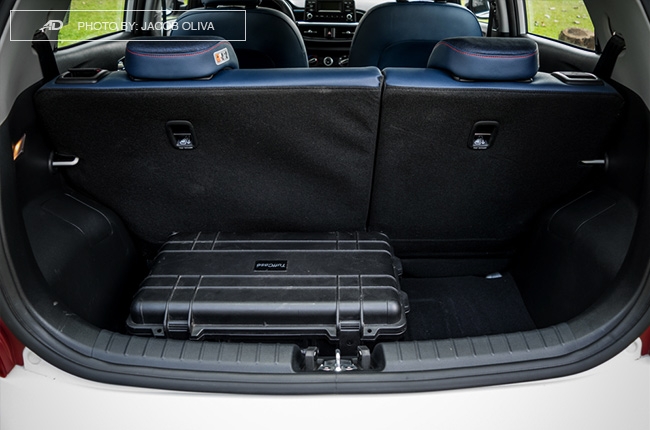 Nevertheless, the Picanto’s pride is its interior space in relation to its overall size. I’m 5’6” with medium built but I don’t feel cramped inside the car (unlike in other mini subcompact hatchbacks). The ample wiggle room can be attributed to the small center console and compartment. Well, less is more. Although if driven by taller drivers, the passengers at the rear seats may have to compromise legroom.

Air-conditioning is more than sufficient for the car. Suspension is on the soft side so it’s pretty comfortable driving the car even on long trips. Meanwhile, outside noise isolation can be improved, but this Picanto is still better on it than the other cars in its class. Trunk space is naturally shallow but easily maximized by folding the rear backrests in 60/40 fashion. The 1.2L DOHC Kappa gasoline engine under the Picanto’s hood was enough for the car’s weight. It wasn’t slow, but it wasn’t fast either. To be honest, I expected more from it. Maybe that’s because of its output ratings of 84 hp and 121 Nm torque that were on top of its mentioned rivals, or the fact that it has four cylinders — as opposed to three of the Mirage or the Wigo.

Although the Picanto GT-Line was equipped with the prehistoric 4-speed automatic transmission, it did its job well and shown a wide range of revs per gear. Based on the theory that the continuously variable transmission (CVT) of other small cars means better fuel efficiency, I must say then that Picanto’s old school transmission bested them out. Although one might argue that the Picanto’s claimed frugality was a result of the ideal conditions in the 2017 Department of Energy’s (DOE) Fuel Eco Run, in which the car came out on top of the gasoline category. But, the car proved on actual roads that it’s worthy of said accolade.

On the highway, the car registered 25.6 km/l at an average speed of 90 km/h. On EDSA morning rush at snail pace, it read 7.2 km/l, while faster speeds at 60 km/h average consumed 14.5 km/l. With this, the Picanto was an over-achiever and definitely exceeded expectations. As expected from a small car, the Picanto was easy to handle. It also had a dynamic steering feel — light at low speeds while tighter at highway runs. This made the car suitable for both tight city maneuvers and out-of-town trips.

On tough inclines, though, the lack of manual mode can be a letdown. But I was able go through them by sticking to the ‘2’ mode, which locks the transmission in second gear for that needed pull. Fair enough.

The brakes of the Picanto can be improved as well. With drum brakes at the rear and discs at the front, you may need to halt earlier for better measure. The Kia Picanto GT-Line is available with a P798,000 price tag. Admittedly, this is much higher than the mentioned rivals, even crossing the price range of bigger subcompact hatchbacks and sedans. However, with its superior design, notable ride comfort, and decent driving characteristics, I must say it’s worthy of the price.

I’m all for value for money and what-nots, but with a car this gwapo, it’s definitely money well spent. I just wish it’s as fast as it looks. It would have been really great if Kia Philippines brought in its Turbo version that’s available globally. 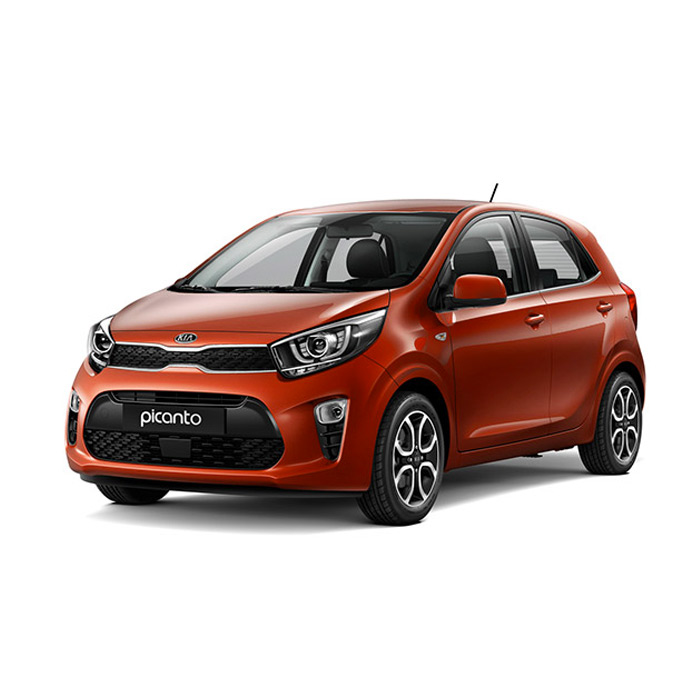 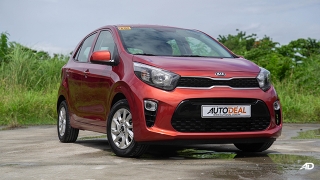