There are a few vehicles on the road as identifiable as a MINI. If you ask anyone to mention a small car, and, whether old or young, a MINI will almost always be mentioned. It projects a certain charm that can’t be replicated, only copied to a small extent, almost like a Vespa is to scooters. It’s a good thing that the AutoHub group quietly introduced an entry-level model in their lineup, hoping to draw in those aspiring to own a piece of the UK in their garages. Available in 3 door and 5 door variations, the MINI One is attractively priced yet unmistakable when navigating our roads.

Performance
Engine Output (HP), Acceleration, Transmission, Handling 3.5/5
Design
Exterior & Interior Design, Quality, Fit and Finish, Ergonomics 5.0/5
Ride Comfort
Cabin Comfort, Suspension, NVH Insulation 3.5/5
Safety and Technology
Convenience Technologies, Active and Passive Safety Features 3.5/5
Value for Money
Amount of the vehicle you get for the price, Fuel Efficiency 3.0/5
What You Will Like
What You Won't Like
How We Do Our Reviews From the outside, our cream colored MINI One 5 door projects the classic looks of this lifestyle oriented brand. From the recognizable oval headlights, to the wheels and tires pushed as far out into the corners as they could go, the MINI One may be easier to obtain than its more expensive stablemates, but still attracts attention. The wide recognizable grille is lined in chrome, sames as the headlights and the entire beltline of the MINI One, with the bottom-most body parts and wheel arches clad in black plastic. It almost gives off a toy car appearance, and the dimensions certainly play to that effect. What’s most impressive about the MINI One is how it maximizes it’s small stature, making it child’s play to snake through traffic and city streets. More on driving later on, though. 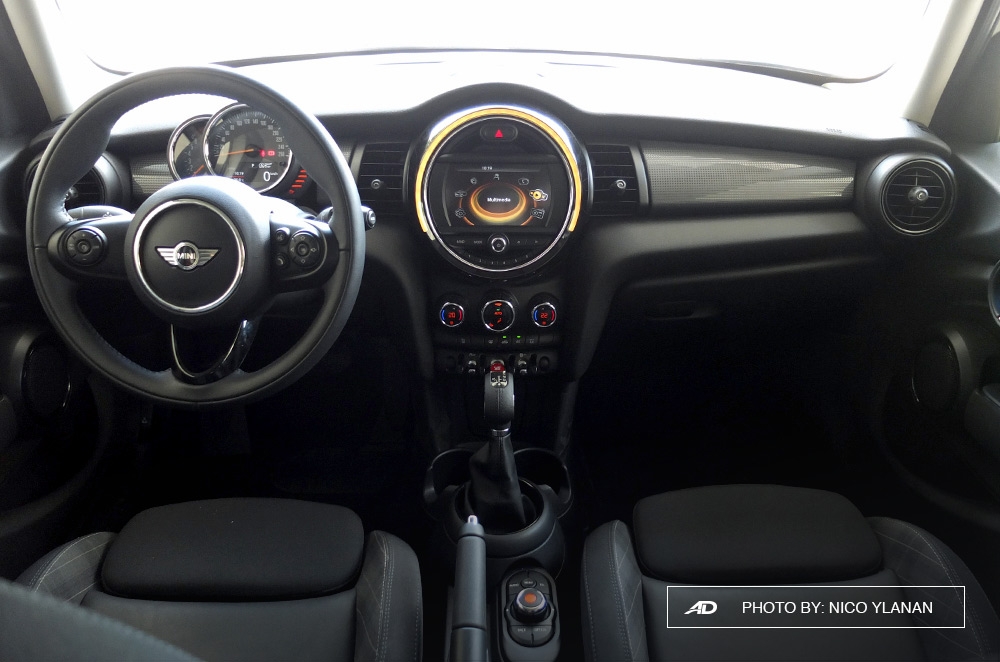 The inside is a mix of fabric and heavy use of soft touch plastics and piano black accents. There’s some chrome bits on the main control surfaces located on the center console, and the overall feel is similar with the rest of the lineup. The classic red switch that pulses to signify that the MINI is ready to start is always a cool touch, and the ambient lighting effects add a ton of character. You can switch the ambient lighting throughout the cabin with a flick of a switch, and the way the multimedia system gives off feedback based on what you’re toggling or adjusting is a fun party trick. The quirky instrument cluster (that looks like a tacked on airplane cockpit instrument) is pretty neat, and the way information is cleverly displayed on such a small footprint is very impressive.

The steering wheel gives off an old-school vibe and the buttons for volume and cruise control functions are nicely laid out. Overall, the switches and buttons are of good quality, with the whole interface used to control the center console is a breeze to use. Interesting to note is that the rear view mirror is placed out of arm’s reach, despite my long arms, and the wing mirrors can be difficult to use if your seat isn’t placed in some of the higher positions. Getting to a proper driving position can be tricky, as the belt line and mirror placement can lead to visibility issues depending on the height of the driver. Space in the rear is impressive for the size of the MINI One. The seats are fabric and comfortable, but the center seat has the issue of the transmission tunnel taking up a lot of foot space. Overall, the cabin is stylish and functional, if you get over the fact that the MINI One is such a compact car, it maximizes space with a dash of old-school charm. Powering the MINI One 5 door is a 1.2-liter 3 cylinder that makes an impressive 101hp thanks to forced induction via a TwinPower turbo. It’s a peppy little engine that makes for quick bursts of acceleration when going about the suburbs and congested streets of the city. The 6-speed automatic transmission makes torque readily available, combining fuel efficiency and power in a neat, tidy package. It makes for some fun driving navigating tight streets and corners when combined with go-kart like driving dynamics. The low center of gravity combined with a tightly packed small chassis just invites you to drive spiritedly. Fuel consumption was a good 15-17km/l on the highway, and 11km/l in traffic.

There’s a good amount of stiffness in the suspension, which can lead to abrupt jolts and bumps, creating a vibe that’s more leaning towards performance. Expansion joints and slight potholes can be irritating, especially at freeway speeds, as you’ll find the MINI One transferring the impact to the cabin and its passengers. It doesn’t upset the handling and the steering wheel won’t have a mind of its own, but longer drives will leave the passengers wanting more travel in the suspension. In the city, the drive is more forgivable as the speeds tend to be lower and opportunities to avoid obstacles and potholes present themselves more often. The MINI One handles the urban jungle exceptionally well, as the size and power are almost perfect for doing daily duties. Factor in the fuel consumption and unmistakable looks, and you have a stylish city cruiser. Take the MINI One to the mountains and you’ll also find the handling to be flickable and responsive enough. The turbocharger makes building speed easy, and the weight and size of the front-wheel MINI One instil confidence to tackle roads at speed.

My only major gripe with the MINI One is the lack of some features that should be standard, especially at this price point and market. Things like LEDs or at least projector headlights are amiss, as well as keyless entry. It’s nice that the MINI One gets push button (or in this case, flip the switch) ignition, cruise control, ABS, and a handy number of airbags, but for just a few more hundred thousand pesos, you get a big jump in standard equipment in the base model MINI Cooper. That leaves us wondering why the specification gap is quite far despite the higher model being fairly accessible. Could it be that the MINI One represents the very basic stepping stone into the brand? We think so. And the optional list of equipment that is available can get pretty expensive as the numbers add up. 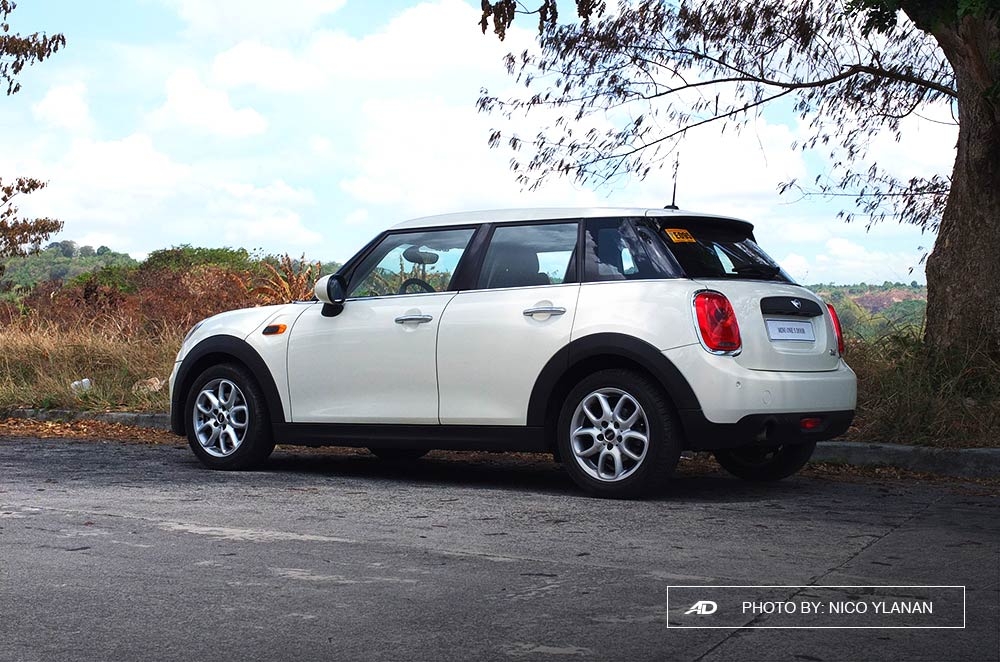 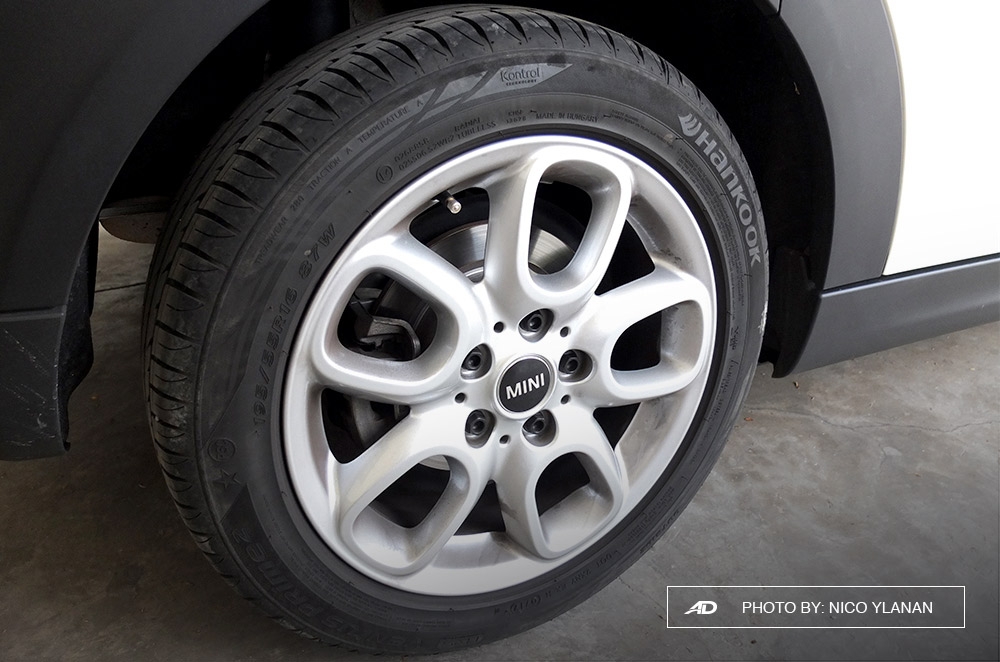 So does the MINI One 5 door accomplish its goal of being the 5 seater variant of the most accessible MINI on the market today? On looks alone, it certainly deserves to wear the nameplate. There’s a lot of what people love about MINI in the MINI One, from the overall looks to the way it drives, and, for most, that’s what matters. For those looking for that extra bit of technology or touches of up-market features that are carried over to the entry-level model, you might find yourself a little disappointed. Besides, the Cooper is only a little bit more away. And financing makes the jump even more manageable.

If you must have a MINI and have a limited budget and can’t stretch a little bit more for the Cooper, or like the idea of a 1.2-liter mill as a daily driver that ticks the boxes of looks, efficiency, and is still a true MINI, then the One is for you. If the Cooper model is definitely within reach, do yourself a favor and pick it up instead. That’s not to say the MINI One is a bad car, it’s just oddly placed and priced when compared to its stablemates, and we hope the following years catch up in terms of specifications and features.