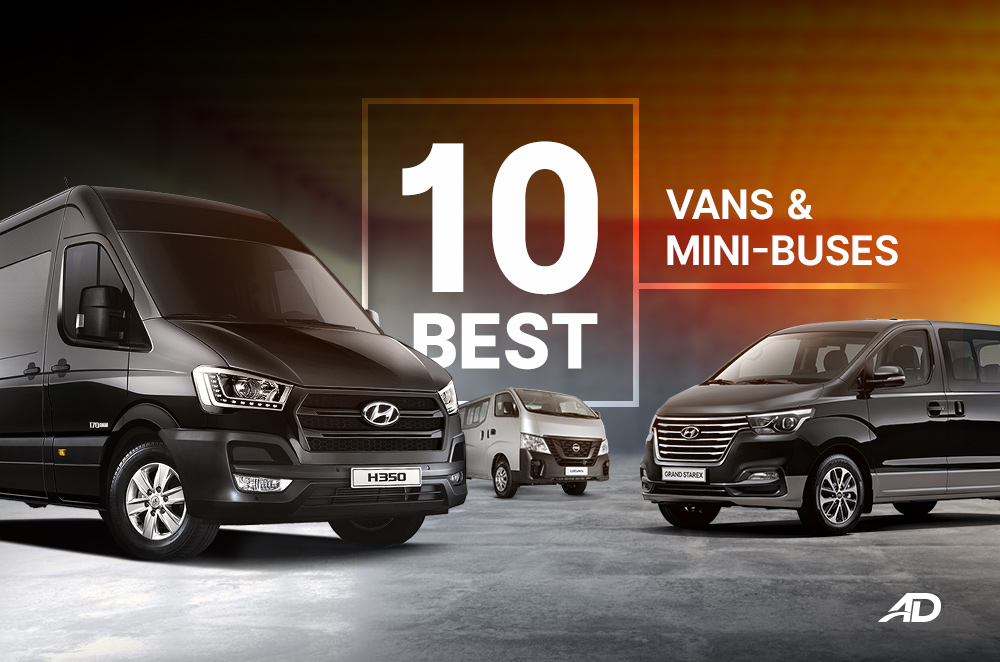 When it comes to the people-mover industry in the Philippines, you are spoiled for choice as many vehicles have been launched to meet the growing market. More and more people are looking for vehicles to get the public moving quickly and efficiently as possible at an affordable price. If you’re in the market to buy a full-size van for a transportation business or to bring your family around, then you should heed this list for some suggestions. The vehicles on this list are presented in no particular order as the prices and features that each one carries will vary. 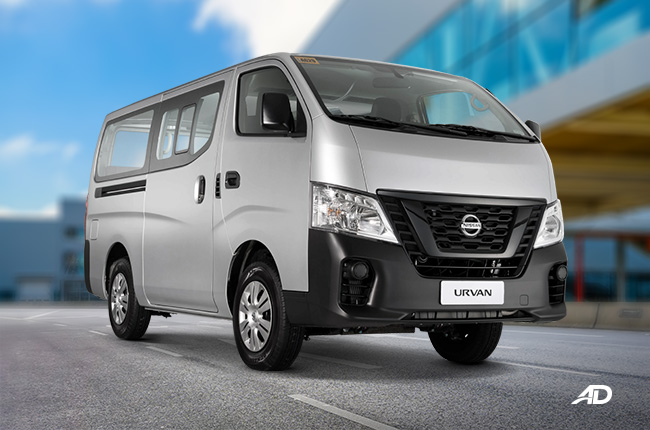 A van versatile van that can be both a people hauler and can meet your personal transport needs is the Nissan Urvan NV350. It features a thinner and more rectangular body than its previous generation but with an updated front fascia. It comes with flexible seating for 15 up to 18 people and comes with a frugal diesel engine. It comes powered by a 2.5-liter turbo diesel motor that produces 127hp and 356 Nm of torque. Power is sent to the rear wheels via either a 5-speed manual or a 5-speed automatic transmission. The Urvan presents itself as an alternative option for those who want a more compact van form factor for their transportation needs. 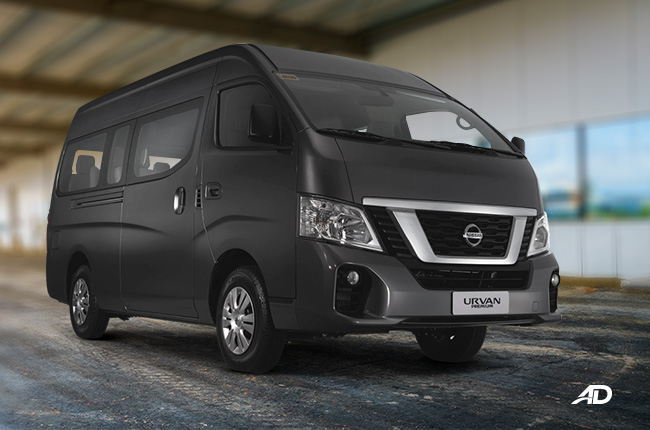 A step above the regular Urvan is its high roof version, the Nissan Urvan N350 Premium. It can only be had with a 15-seater configuration, however, the higher roof makes it easier for occupants to move inside the vehicle. The NV350 Premium is also longer by 536mm than its Urvan contemporary giving it more leg space for its occupants. The bubble top Urvan comes in as one of the more affordable vehicles you can buy on the market that comes with a high-roof line. It also shares the same features found in the standard model.

Under the hood, the NV350 Premium is also powered by the 2.5-liter turbo diesel engine that is found in the regular Urvan variants. It still produces 127hp and 356 Nm of torque and can be had with a 5-speed auto or a 5-speed manual transmission. 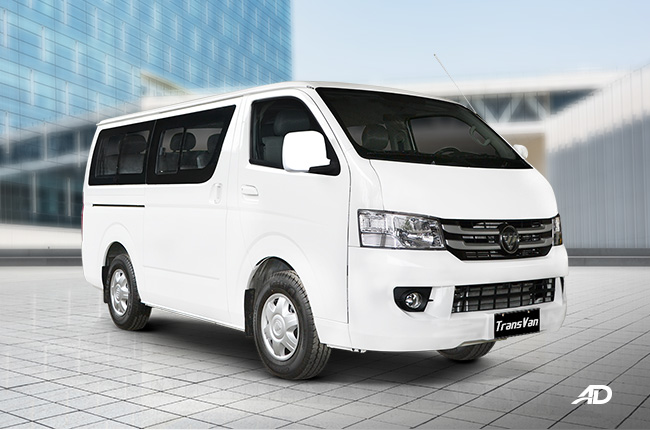 Like the Urvan, the Foton View Transvan also features a boxy and rectangular design. It comes with versatile seating configurations that can support 13 to 15 occupants comfortably. Powering the tube-type van is a 2.8-liter turbo diesel Cummins engine that produces 94hp and 225 Nm of torque. While it may not seem like a lot on paper, it's more than enough to get the van up to speed even when fully loaded. Unlike the other vans on this list, the Transvan can only be had with a 5-speed manual transmission. If you’re looking for an affordable people mover or cargo transporter then the Foton Transvan could be for you. 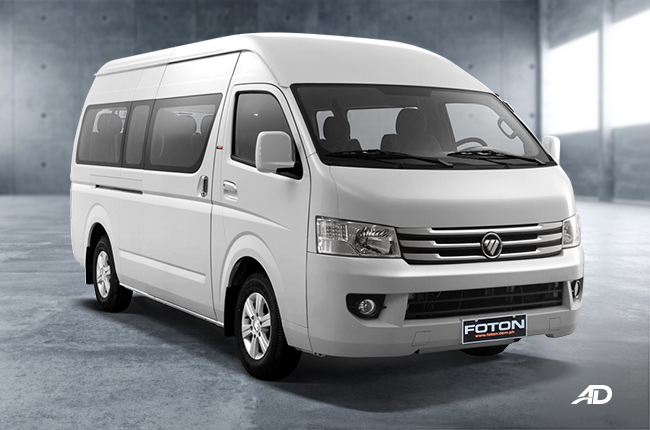 If you want to get a much longer version of the Transvan with a bubble top then the Foton View Traveller XL is your go-to choice. It features a similar front end to the shorter wheelbase van but with a taller roof-line. It also comes with a different front fascia as well giving it a more modern utilitarian look. Under the hood, is the same 2.8-liter turbo diesel Cummins engine found in the standard vehicle however output has been increased. The diesel mill now produces 130hp and 280 Nm to haul the extra weight of the roof along with the increased wheelbase. Like the standard vehicle, it too can only be had with a 5-speed manual transmission.

In terms of seating, the Traveller XL can seat up to 19 passengers thanks to a revised layout and more space inside due to its longer wheelbase. Similar to that of the Transvan, the Traveller presents itself as one of the more affordable options available in the local automotive market for hauling people and cargo. 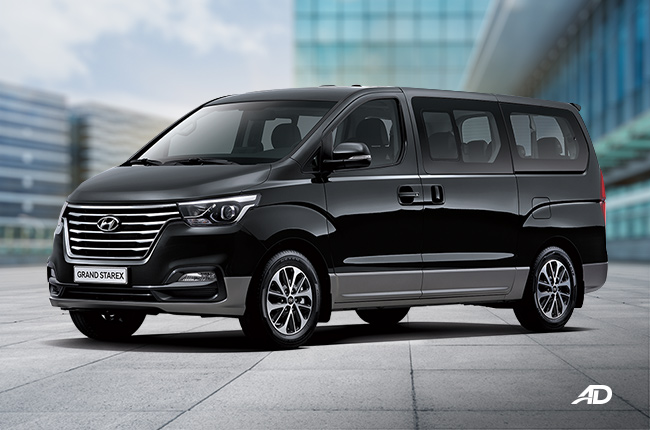 Another van for those looking for a little more luxury during their travels is the Hyundai Grand Starex. It is the Korean manufacturer’s entry into the competitive van segment. It features two engine options in the form of a 2.5-liter turbo diesel motor with varying outputs. The first option produces 98hp and 225 Nm of torque, while the second option produces 168hp and 441 Nm of torque. When it comes to seating configurations the Hyundai Grand Starex is versatile as it can seat 12 up to 18 occupants depending on the variant. For those who want a Korean van with the option of a premium or utilitarian interior then the Grand Starex should be a van you should consider. 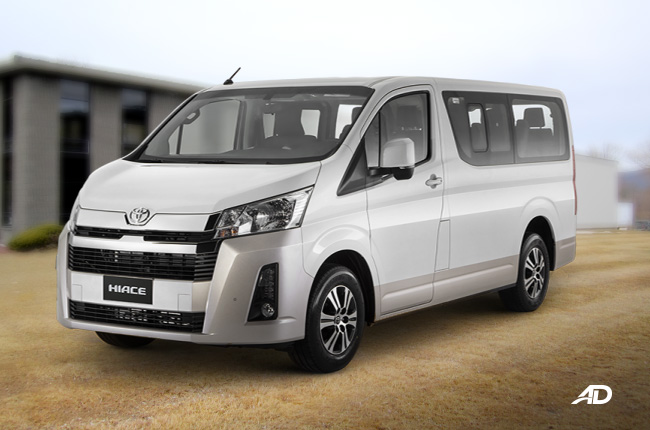 The Toyota Hiace comes with multiple variants that are ready to meet your business or family needs. From the Hiace Commuter Deluxe all the way to the Hiace Grandia Tourer then further with the Super Grandia, the van presents itself as an adaptable vehicle that is up for the task. It comes with seating for 12 to 15 depending on the variant along with a frugal diesel engine.

Powering the van is a 2.8-liter turbocharged diesel motor that it shares with its stablemates the Fortuner, Hilux, and the Innova. The diesel mill is capable of producing 174hp and between 420 to 450 Nm of torque, however, this will vary from variant to variant as the tuning has been changed slightly to meet the required purpose of the vehicle. Seating material will also vary depending on the model chosen as the cloth seats are relegated to the lower variants, while leather can be found on the higher trim levels. As far as transmission options go, the Toyota Hiace can be had with either a 6-speed automatic or a 6-speed manual transmission that sends power to the rear wheels.

The Commuter is a great option for those looking for the most seating and to maximize the value of their van purchase. More of a people hauler than luxury liner, the Hiace comes with the essentials as well as seating for up to 15 individuals.

Next up is the Grandia. A spruced-up version of the Commuter, it takes the platform and elevates its interior to be much better for passengers and comfort. Geared more towards comfort compared to the base variant, it adds extra features such a few interior touches and amenities and a less-cramped cabin area.

If bigger is indeed better, then look no further than the Grandia Tourer. Taller and longer than all the other Hiaces in the variant lineup, this van is borderline a minibus at nearly 7-feet long. Seating for 13 with generous amounts of leg and headroom for all, the Tourer is definitely a van that can serve as a well-adorned long-distance hauler like its namesake. The engine is rated at 163hp and 420 Nm of torque for this variant. 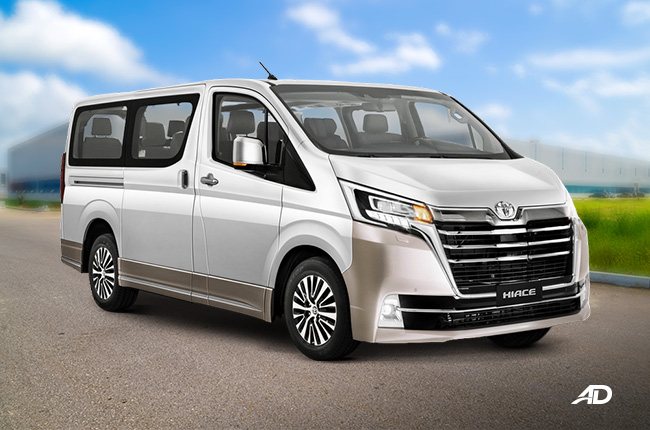 If you are looking for a lot more luxury in your people carrier then look no further than the Toyota Hiace Super Grandia. It presents itself as the more luxurious version of the Hiace and comes with a few more extra features for its more premium price tag. For its higher variants, it also comes with Toyota Safety Sense technology which gives it features such as a pre-collision system, adaptive cruise control, and a lane departure alert system to name a  few. To further differentiate it from the regular Hiace, the Super Grandia comes with two rows of captain’s seats for a more refined interior and a more spacious cabin. It also comes with fabric and leather as seat material options as well as a two-tone paint job.

Just like the regular Hiace, it too comes with the same 2.8-liter turbo diesel engine. It produces 174hp and 450 Nm of torque which sends power to the rear wheels via a 6-speed automatic only.

Another category of vehicles you might want to consider if you want to haul people or cargo around as part of your business is the mini-bus segment. These are essentially much larger and taller versions of the vans on the list. They may be huge but it does benefit the vehicle when it comes to interior space and seating capacity. These offer much more roof, however, it comes at the cost of usability as these vehicles come at a height above 2 meters and as such will not be able to fit in regular multi-level parking buildings. 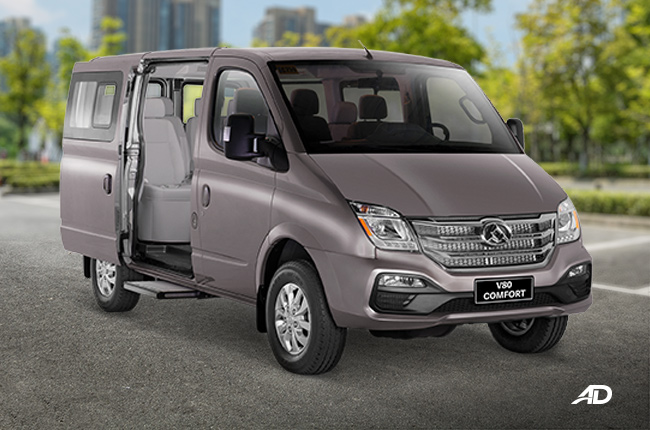 A European entry into this list is the Maxus V80. This van can be had in both passenger- and cargo-hauling configurations, which can act as both a workhorse for your business and as a family vehicle. The V80 comes with three variants available with differing seating layouts. The people carrier version of the van can accommodate between 13 to 18 people depending on the variant chosen. There is also a cargo-only variant available for those who have a shipping business or hauling business. It comes powered by a 2.5-liter turbo diesel engine that produces 134hp and 330 Nm of torque and sends power to the rear wheels via a 6-speed manual transmission. Among all the options the V80 comes with a boxy design along with a high riding an upright driving position. However, despite its size and height, the van is still easy to drive as its steering is nicely weighted. 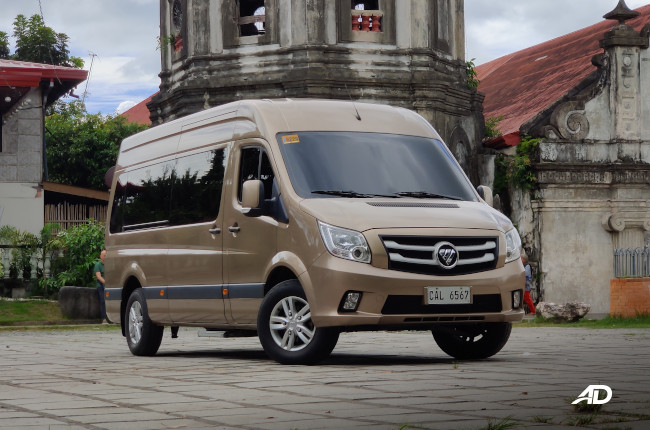 Another entry on the list is the Foton Toano. This minibus comes available with two seating configurations, an 11 or 15 seater layout. Thanks to its tall roof the interior is spacious enough that passengers can stand inside of it and easily move about. It also comes with an automatic sidestep to make entering and exiting the vehicle much easier.

It comes powered by the same 2.8-liter turbo diesel Cummins motor that is found in the Traveller XL that makes 130hp and 280 Nm of torque. In terms of features, the people hauler is on the bare side, however, it is to be expected for this class of vehicle. It presents itself as more of a utilitarian vehicle rather than a luxurious or premium one. It's a no-nonsense approach to people hauling. 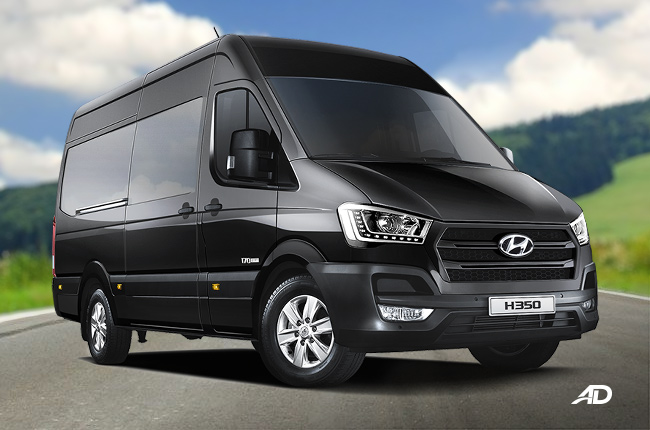 Another entry on this list from the South Korean automaker is the Hyundai H350. This minibus comes with a high roof-line and with a spacious interior that can seat up to 14 occupants. Thanks to its bubble top and easy to use sliding doors, getting in and out of the vehicle won’t be a problem. Under the hood, the H350 comes powered by a 2.5-liter turbo diesel engine that produces 170hp and 421 Nm of torque making it one of the more powerful minibusses on the list. As it is a people hauler and a utility vehicle it can only be had with a 6-speed manual transmission. 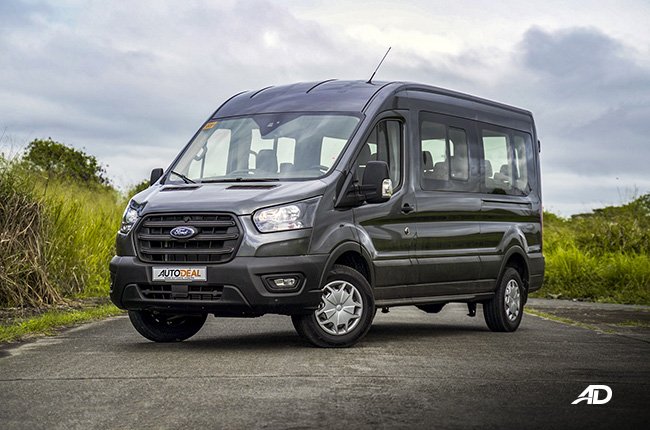 A relative newcomer to the segment is the Ford Transit. This behemoth of a minibus measures in at 5,981mm long, 2,474mm wide and 2,517mm tall. One of the bigger options available for those who want to haul people or cargo around. It can seat up to 15 occupants with enough space for them to be comfortable on long journeys.

The Ford Transit in the Philippines comes powered by a 2.2-liter Duratorque turbo diesel engine — a similar motor to the units that power the lower variants of Ranger and Everest. It produces 133hp and 385 Nm of torque and sends power to the rear wheels via a 6-speed manual transmission. For a vehicle of its size and class, it's more than enough to get the minibus up to highway legal speeds.