What is the Number Coding scheme?

The Unified Vehicle Volume Reduction Program (UVVRP), or simply known as the Number Coding Scheme, is a program implemented by the Metro Manila Development Authority (MMDA) that restricts both private and public utility vehicles from traversing the roads based on the last digit of the vehicle's license plate. This scheme is enforced during weekdays (Monday to Friday).

The Number Coding Scheme was first implemented in 1995 as an experimental basis that initially targets public utility vehicles (PUV). The program later included all vehicles plying Epifanio de los Santos Avenue (EDSA). During weekends and holidays, the number coding scheme is not implemented. The said system has been updated multiple times before the government agency came up with the latest version we use today.

What is the purpose of the Number Coding scheme?

The UVVRP or Number Coding Scheme aims to lessen the traffic congestion in the Philippines by banning vehicles that travel on public roads depending on their license plate. This program is based on Section 1 of the Memorandum Regulation No. 96-005. As of 2019, the number coding scheme starts from 7 a.m. to 8 p.m.

What are the Number Coding days? 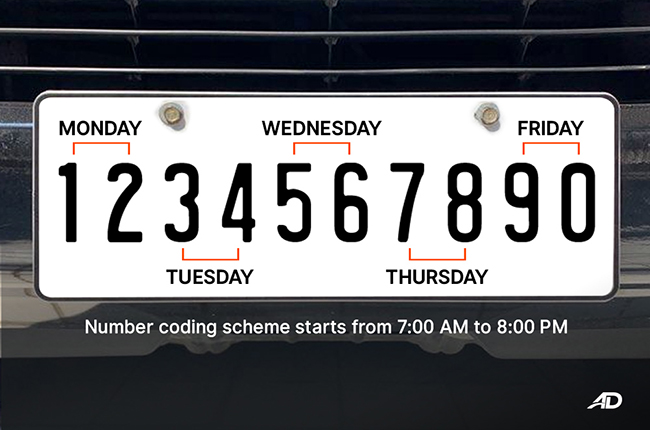 As a driver or even as a car owner, it’s best to know your vehicle’s plate number, especially its last digit to avoid using it on the imposed number coding days. Plate numbers that end with 1 and 2 are not allowed to travel on certain roads every Monday. The same policy applies on plate numbers 3 and 4 every Tuesday, 5 and 6 every Wednesday, 7 and 8 every Thursday, and 9 and 0 every Friday.

At what time are the Number Coding hours?

Based on UVVRP, the standard coding scheme period is from 7 a.m. to 8 p.m. Meanwhile, the following areas do not allow restricted vehicles to cruise on its respective roads around 7 a.m. to 10 a.m. and 3 p.m. to 7 p.m.: Caloocan City, Quezon City, Valenzuela City, Malabon City, Manila City, and the City of San Juan.

As for Pasig City, the odd and even coding has been discontinued last July 1, 2019, with it observing the usual coding scheme. Restricted vehicles are not allowed to enter Pasig roads between 7 a.m. to 9 a.m. and 4 p.m. to 7 p.m., the same goes with Paranaque.

With the city of Marikina totally exempted from the standardized coding scheme, Muntinlupa and Taguig are in partial exemption, as some locations within the city are not accessible for those vehicles in coding: Muntinlupa (Except Alabang-Zapote Road) from 7 a.m. to 8 p.m. and Taguig (except East Service Road and Manuel L. Quezon Avenue).

What are window hours?

‘Window hours’ gives drivers the immediate grant to go through their cities without fear of infractions. Radial Roads, Circumferential Roads, and National Roads, on the other hand, are not supported by the window hours system. Although there are no window hours on the following roads as mentioned, drivers can cut through these roads by taking secondary routes. Do take note that this would require you to check the window hours schedule of the respective location you are to pass through.

Are there any cities in Metro Manila without Number Coding window hours?

Aside from roads such as EDSA, Roxas Boulevard, and other Circumferential roads, there are also cities that do not support the window hours system,  including Mandaluyong, Makati, and Las Pinas.

Pasay also implements the number coding system without window hours but with certain areas in exemption including MIA Road, Domestic Road, Airport Road, and Gil Puyat Avenue (Pasay side). Therefore, all restricted vehicles for the day are not allowed to pass its roads throughout the entire number coding scheme period from 7 a.m. to 8 p.m.

What vehicles are exempt from Number Coding? 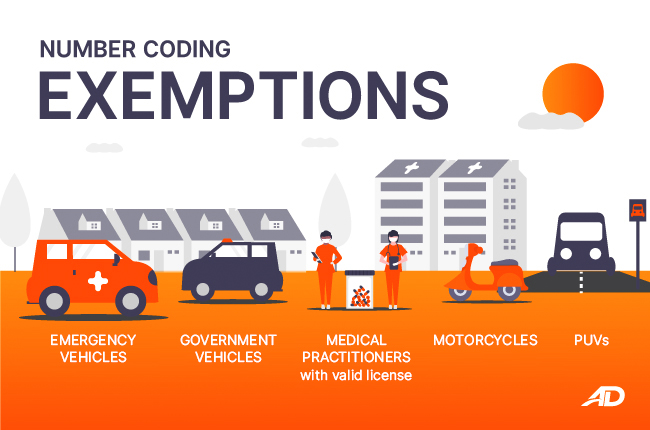 To make things clear on the UVVRP, the MMDA released the Memorandum Circular No. 3, Series of 2011 which enumerates the vehicles that are automatically exempted from the numbing coding system.

Meanwhile, you can apply for number coding exemption subject to evaluation and approval if you own or operate vehicles like school buses and company shuttle vehicles, unmarked vehicles of media practitioners, emergency care doctors, persons with disabilities, vehicles for perishable goods, and Department of Tourism (DOT) accredited tourism vehicles.

What are the penalties for being caught by a traffic enforcer when violating Number Coding?

If ever caught violating the number coding scheme rules or UVVRP, you’ll need to pay a standard fine of P300. The said penalty shall be settled within seven days or else, you’ll have to face additional fines when you renew your driver’s license which means more of a hassle on your part.

Full List of Roads in Metro Manila with Number Coding With the implementation of the number coding scheme, motorists won’t be able to ply on major roads in Metro Manila from 7 a.m. to 8 p.m. If you’re looking for the roads to avoid, we got you covered. Take note that the listed thoroughfares below don’t have window hours so don’t think about traveling when your vehicle’s in coding.

Muntinlupa City does not have a number coding scheme except Alabang-Zapote Road, which starts from 7 a.m. to 8 p.m. and has no window hours. This road stretches from Muntinlupa to Las Pinas. Meanwhile, Commerce Avenue also follows the number coding program and according to Alabang Bulletin, Barangay Ayala Alabang clarified that there’s still window hours in the area from 9 a.m. to 4 p.m.

In case you violate the rule, you will have a fine of P500 on the first offense, P750 on the second offense, and P1,000 on the third and succeeding offenses.

Known as Metro Manila's Central Business District, Makati City has no window hours which means that the number coding rule applies from 7 a.m. to 8 p.m. A standard fine of P300 will be imposed on violators.

In Quezon City, the implementation of the number coding scheme starts from 7 a.m. to 7 p.m. Motorists can still traverse the roads not listed above given that they will only travel from window hours of 10 a.m. to 4 p.m.

In 2019, Pasig City Mayor Vico Sotto suspended the Odd-Even traffic scheme. As such, it will follow the general schedule of UVVRP which limits motorists to ply on the following roads below starting from 7 a.m. to 7 p.m., with window hours of 10 a.m. to 4 p.m.:

If you're living in Pasay and your vehicle is coding, be reminded that this city has a number coding scheme from 7 a.m. to 8 p.m. with no window hours. However, this rule doesn’t apply to thoroughfares such as Domestic Road, Ninoy Aquino Avenue, MIA Road, Sales Road, parts of Airport Road, and parts of Buendia (Gil Puyat).

In Paranaque City, the number coding scheme starts from 7 a.m. to 7 p.m. Motorists residing in this area are lucky enough since there are window hours that start from 9 a.m. until 4 p.m. only.

The coding scheme in Mandaluyong City starts from 7 a.m. to 8 p.m. with no window hours. As such, it's better to plan your trips ahead because at the end of the day, you don't want to pay a fine, do you?

The number coding scheme is implemented in Valenzuela City which starts from 7 a.m. to 8 p.m. Drivers who need to traverse the road still have the chance to go within the 10 a.m. to 3 p.m. window hours. This program takes effect on these roads:

The city of Taguig is partially exempted from the coding scheme. That said, there are still some selected areas that implement the coding scheme. Specifically national roads within its boundaries, including East Service Road, and Manuel L. Quezon Avenue.

The City of San Juan is currently practicing the number coding scheme scheduled from 7 a.m. to 7 p.m. Along with its respective timeframe, restricted vehicles are allowed to roam during window hours which commence from 10 a.m. to 3 p.m.

In Caloocan City, motorists observe its number coding scheme that runs from the usual 7 a.m. to 7 p.m. schedule. While other roads within the vicinity of Caloocan are granted with the 10 a.m. to 3 p.m. window hour system, Samson Road has been left exempted. This means restricted vehicles are not allowed to traverse the said area throughout the entire number coding scheme period.

Is there Number Coding outside of Metro Manila?

In order to constantly regulate vehicular activities in different areas, the UVVRP has also been stretched throughout different locations outside of Metro Manila. This includes Baguio, Cavite, Cabanatuan, and Dagupan, with all cities following the same daily conduction sticker or license plate restriction.

Baguio or commonly known by many as the city of pines, actually has selected areas which are limited to restriction, these places are mainly composed of tourist areas such as Session Road, Burnham Park, and Baguio City Market in general.

That said, the number coding scheme is implemented along the Central Business District where it is crowded due to offices, businesses, and big schools situated within the area. Its coding scheme period commences during weekdays, specifically from 7 a.m. to 7 p.m. Notably, the number coding in Baguio is lifted during holidays, festivals, and summer vacation months in order to accommodate more tourists. Violators will then have to pay a fine of P500.

Cavite City has also been practicing the UVVRP, with its number coding scheme being implemented during weekdays from 6 a.m. to 7 p.m. on major thoroughfares within the territorial jurisdiction of the province:

Window hours usually last from 9 a.m. to 3 p.m. Above all its number coding policies, violators will then have to pay a fine of P300.

Are there likely to be any changes to Number Coding in the future?

In most circumstances, change is inevitable. A principle that does apply to the UVVRP. Constant efforts are raised in order to properly regulate the flow of vehicular traffic. Just to recall, Pasig’s odd-even number coding scheme was discontinued by Mayor Vico Sotto, as it is believed to be an unfair system.

Changes commenced as Pasig began to lean back towards the usual number coding scheme, believing that there are better solutions for the city’s vehicular traffic which would then require them to engage in further studies in order to formulate strategic solutions.

Window hours are undoubtedly a blessing for many local motorists, given the instant grant of freedom for restricted vehicles to roam around roads for a limited amount of time. However, MMDA General Manager, Jojo Garcia, requested for a standardized 7 a.m. to 8 p.m. no window coding scheme. This would prohibit restricted vehicles from plying the road throughout the entire coding period. Currently, Radial Roads, Circumferential Roads, and National Roads are not already supported by the window system.

With a number of strategic solutions being proposed and applied today, certain changes in the number coding scheme will surely occur in the near future.