Honda Philippines has recently launched the all-new Honda City that now comes with four variants and a new RS trim level. It brings with it a new sporty and premium design along with a host of new features that will definitely have interested buyers considering the subcompact sedan. With the 5th generation, Honda City already on sale in the Philippines let’s see how it stacks up against its competitors. 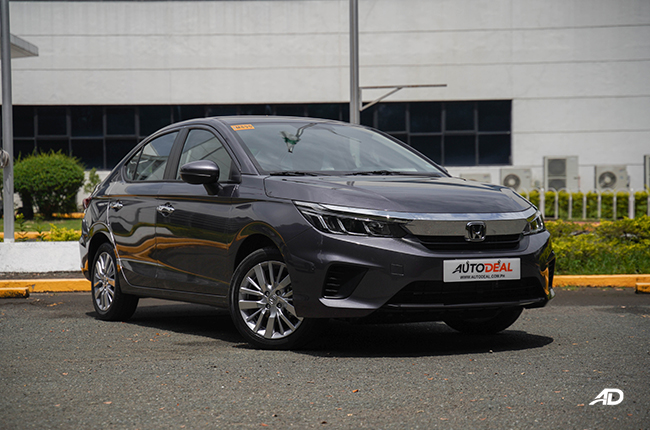 For its latest iteration, Honda Philippines has chosen to go with a more sporty and premium look for the all-new City. The Japanese brand has taken design cues from its bigger stablemates the Honda Civic and Honda Accord and integrated it into the new subcompact sedan. Along with the new design comes a new set of exterior features. The all-new City now comes with a full LED lighting system for the RS variant, while lower grades get halogen projectors instead. It also gets a new set of 15-inch wheels for all variants with RS trim-level getting its own unique design in a 16-inch form factor.

The interior of the 5th generation Honda City has also been improved. It now comes with a black theme with a new leather and suede option available for the RS model. Rear air vents have also been made available on the latest iteration of the Honda City, however, it is important to note that this is only available with the top-of-the-line variant. All other variants of the Japanese subcompact sedan all come with cloth as the upholstery of choice. In terms of specifications alone, this puts the Honda City slightly above the competition when it comes to its exterior kit. When it comes to features the Honda City is well appointed. Along with a new interior layout, it comes with a new 8-inch infotainment system that now comes with Apple CarPlay and Android Auto capabilities. It even comes with an ECO button and with an eco-coaching feature on all variants except the 1.5 S MT variant.

Safety has also been improved as the City now comes with more airbags than its predecessor. It now comes with driver and front passenger airbags, side airbags, and side curtain airbags for the RS trim-level. Other standard safety features include ABS with EBD, vehicle stability assist, emergency stop signal, ISOFIX tethers, a knee bolster. A multi-view reverse camera is also available with the vehicle for its V and RS trim levels. When it comes to power the Honda City still comes powered by a 1.5-liter naturally aspirated gasoline engine that produces 119hp and 145 Nm of torque. Power is sent exclusively to the front wheels via either a 6-speed manual or a continuously variable transmission. While the displacement of the Honda City remains the same, its engine has been changed. Instead of being a Single Overhead Cam engine (SOHC), it now features a Dual Overhead Cam motor (DOHC). This is a first for the subcompact sedan as most of its iterations in the Philippines have all been SOHC engines. When it comes to pricing the Honda City has a bit of a higher barrier to entry for its most affordable variant. While its competitors are placed well below the P750,000, when it comes to their entry-level variants the Honda subcompact sedan starts at a higher price at P838,000 for its S MT variant. This makes the City a slightly more expensive vehicle to buy, however, it is justified by the number of standard features you get straight from the entry-level variant.

When it comes to the higher trim levels, the Honda City RS does well when it comes to being competitively priced. With a standard retail price of P1,048,000, this makes the subcompact sedan cheaper by P8,000 compared to its long time Toyota rival. Not only that, but it also brings with it more features that aren’t present with its rivals. This makes the RS variant not only affordable but also worth considering especially with the new features that it brings. If you want to know more and about the price list of the all-new Honda City you can check out the Autodeal website for more information.