At nearly 6 meters long, and over 2 meters wide, the Ford F-150 is just comically large. On the highways of America, the full-size truck looks right at home. Whether it is parked in a huge open parking space, or on a ranch or farm, the work truck seems more suited to life on the open road.

Now take that away. Put it in a country where traffic and tight streets as normal as breathing, and the F-150 is just too much truck for anyone in the Philippines, but the thing is, no matter how big it gets, no matter how impractical it is to park, or no matter how abysmal you think the fuel economy might be, we still want one. It goes against all conventional schools of thought, all line of reasoning in this country, but we want one. You’d think the size of the F-150 would make people run away from it and not buy it, but that’s also the thing, it gives you so much road presence that there is a bit of a bubble around it, kind of like its own safety feature. Now we don’t have the size listed as a safety feature, but it inadvertently is to some extent. Now, we have to admit that it is a detriment to be driving something this big, and it is a hassle if you are caught between two cars and not enough space. Not to mention that finding parking for the thing will be a hassle and you might have to rely a lot on the 360-degree camera it comes with.

When you drive it, however, it’s an event. When you see its reflection, it’s a treat. You can’t help but smile a bit knowing that you’re driving something massive, and that’s not even touching on its performance. Speaking of which... With 637 Nm of torque, and 375 hp coming from a twin-turbo V6 mated to a 10-speed automatic transmission, you can’t help but love the surge of power you get after a quick stab of the throttle. It’s a wonder how much torque this EcoBoost motor produces. It’s way more than a diesel engine and smooth as butter to boot. You also get a great deal of refinement. Thanks to Ford’s design, the motor is quiet and refined during idle, and while under load.

This engine was made to take on the plains of America, tow a trailer, stay on the highway for extended periods of time, all while retaining the fuel economy of a 6-cylinder that’s only naturally aspirated. No, we’re not talking about the look of the truck, which is quite nice, to begin with, instead, we’re talking about the literal looks that you will get while driving this thing in the city, or trying to park it. We took it out for a few drives in the city. People would stare and look at it as if it were a roadside attraction. There’s a magic that the F-150 has even in a congested country like the Philippines, and it has a charm that is more approachable than a Ford Mustang or a sports car but speaking of sports cars.

It can keep up While it won’t leave faster cars in the dust, with a 0-100 km/h time of about 6 seconds, it’ll make mincemeat out of most normal cars out in the road, whose times are closer to 10 seconds. Now it is heavy at about 2,500 kg, but you’re offsetting that weight with all that torque, when you floor it and thanks to the numerous gears it has, there’s power at almost any speed you go.

It makes no sense 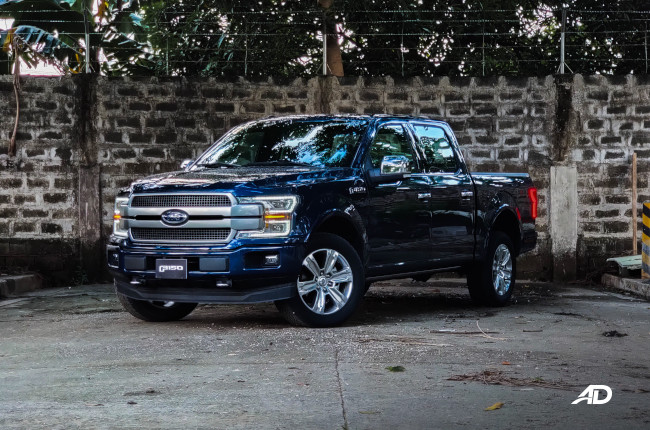 So yes, we are eager to have this, we are eager to give everyone a full review on it as well as a video review. Even if a new model launched, you cannot deny that this is one of the best trucks out in the market right now. Ford has a way of making stellar pickups. This wouldn’t be the number one best-selling pickup in the United States for no reason, and for P2,990,000 for the F-150’s Platinum variant, you even get a cabin that is, as some of our friends said, “Like business class on wheels, but in a pickup truck.” It makes no sense whatsoever. It’s excess, it’s too practical that it is impractical, but we still want it, and we just don’t know why.

Did we mention it has heated and cooled massage seats?