Multi-purpose vehicles (MPVs) have grown in popularity over the past few years. These vehicles are the jack of all trades of cars that can do a lot of things relatively well. If you need a vehicle that can carry seven people comfortably and turn in a cargo hauler on the next trip, an MPV will happily heed that call. Enter the Maxus G50 and the GAC GN6, two fairly new entries into this segment that want to take on the established nameplates. One seeks to dethrone a crowded favorite, while the other seeks to make a name for itself in an already populated segment. With that said, we compare both vehicles by their specifications to see which one will come out on top. When it comes to the exterior kit that both vehicles have, both the Maxus G50 and GAC GN6 come out on a relatively even playing field. Both MPVs come with LED lighting elements available, however, it is important to note that the G50 comes with lower variants that only come with halogen headlights. Both vehicles also come with sunroofs but the Maxus MPV only has it with its Premium variant. On the inside, both vehicles come with similarly styled interiors. The G50 goes with a sportier and sportier approach as more angles can be seen on its dashboard. It breaks the norm of a typical MPV interior by adding red accent stitching to the dashboard and even features angular gauges as well as a floating infotainment system. The GN6, on the other hand, goes with a more conventional and almost car-like design. It comes with a wide and tall dashboard that houses the infotainment system as well as its analog gauge cluster.

However, where these two vehicles differ greatly is when it comes to their seats and seating capacities. While the Maxus MPV comes with leather seats and an 8-seater capacity, the GAC MPV comes with a second row that features captain’s seats. The GN6 takes a more spacious and luxurious approach to its interior, while the G50 goes with a sportier and more family-oriented look and feel. All things considered, we give this category to the GAC GN6 as it offers you more space but at the sacrifice of passenger occupancy. It may be down one seat but it certainly has an advantage in terms of the comfort factor. It also helps that the third row can completely be folded down flat in the GN6 revealing a much flatter cargo area. When it comes to the safety technology that both vehicles carry there is a stark difference between the two models. On paper and based on the spec sheet that GAC has available on their website and from their physical brochures, the GN6 only has a few safety features to offer. These are dual front and side airbags, an electronic stability program, and an engine immobilizer.

The Maxus G50, on the other hand, carries much of the same features as its rival with the addition of electronic brake assist, hill hold control, and a tire pressure monitoring system. It is also important to note that the Maxus MPV also comes with a 360-degree camera available along with front and rear parking sensors.

With that in mind, we award the Maxus G50 the win as it offers more safety technology compared to its MPV rival. This is another category in which the two vehicles differ greatly. The Maxus G50 outright comes out with an advantage as it is the cheaper vehicle between the two by a nominal amount. The Maxus MPV can be had for between P948,000 to  P1,338,000. The GAC GN6, on the other hand, for its lone variant is priced at P1,480,000 making it the more expensive MPV to get.

With that said the win goes to the Maxus G50 as is the more affordable vehicle between the two, coming in with a P110,000 difference. You also get a lot more features in the G50 compared to the GN6 when you compared both of their respective top-of-the-line models. 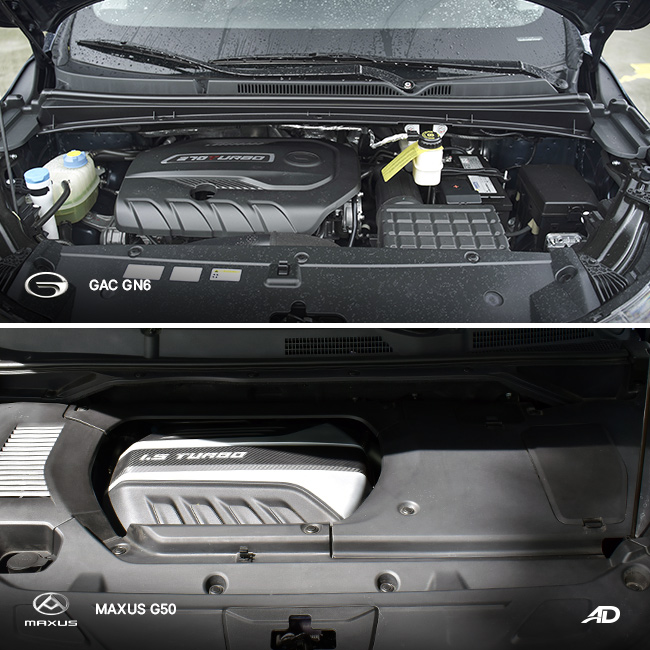 When it comes to what is under the hood, both the GN6 and the Maxus G50 are powered by a 1.5-liter turbocharged gasoline engine. The Maxus pushes out 167 hp and 250 Nm of torque, while the GAC makes 170 hp and 265 Nm of torque. The G50 sends power to the front wheels via a 7-speed dual-clutch transmission, while the GN6 shifts via a 6-speed automatic.

As they both come equipped with a 1.5-liter turbo motor under the hood, the win for this category goes to the GAC GN6 as it makes more power and more torque. It overtakes its Maxus rival with an advantage of 3 hp and 15 Nm of torque. While this difference may not seem like a lot on paper, having this small advantage will help especially when these vehicles are used to their maximum capacities. A little torque goes a long way in these situations. These two MPVs offer their prospective buyers two approaches. One goes with a more spacious and luxurious interior thanks to the addition of captain’s chairs and a cleverly folding third-row seat. While the other offers you more tech and safety with the addition of being an 8-seater vehicle instead of a conventional 7 seater. This makes choosing between the two a difficult task as some of their features overlap. Where one is lacking, the other makes up for it in a totally different way.

While the decision is hard as both vehicles come with their own merits, the win ultimately goes to the Maxus G50 as it is the more affordable option. The MPV is P110,000 more affordable than its rival when comparing the top trim levels and comes with more tech and safety features as well. This makes it the more attractive option between the two especially when a tight budget needs to be accounted for. Nevertheless, the GAC GN6 is still a great choice for those who want a little more space for their MPV. The second row of the GAC is the better place to be when comparing the two vehicles as the captain’s chairs offer you great comfort and great legroom at the same time.