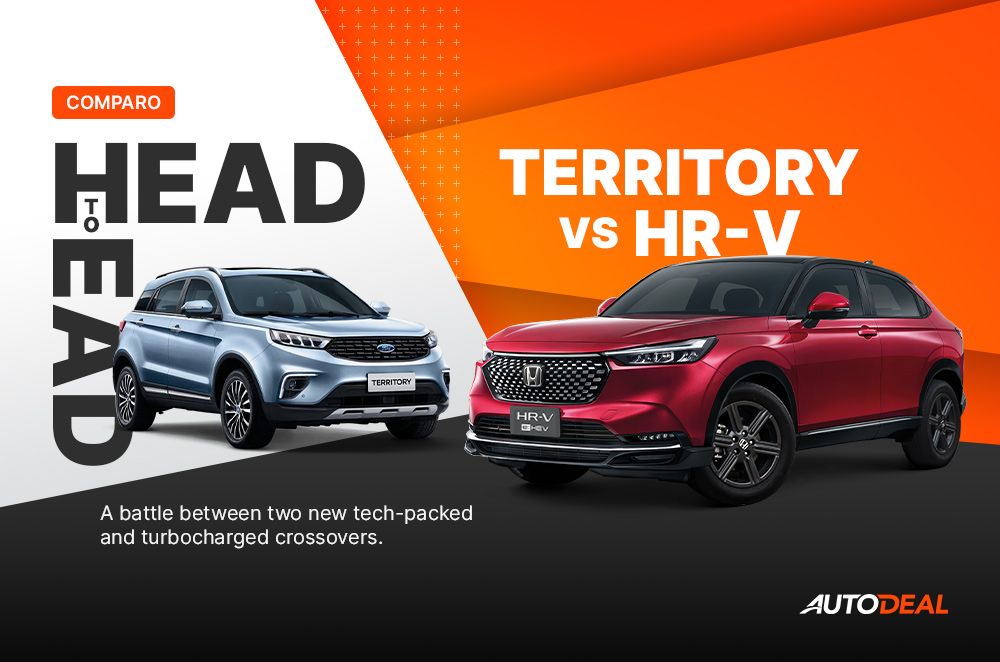 The new Honda HR-V recently launched into the Philippine market bringing with it a new exterior design, a new set of features, and new pricing as well. That being said, its new feature set puts it in good contention with one of the more seasoned veterans of the crossover segment in the form of the Ford Territory. With both crossovers carrying similar features, we will put them head to head to see which one will come out on top and to see which one you should get. Looking at these two vehicles from the outside will reveal that they have similar styling cues. Both of them carry sleek LED headlights, and a large grille, along with smooth lines and curves at the front. While the Territory does come with bumper-mounted LED daytime running lights, the HR-V has them integrated into its headlights.

One thing to note is that the Territory comes with bigger dimensions all around as the vehicle is wider, taller, and longer than its Honda counterpart. This points to a slightly bigger interior space giving it an edge over its Japanese counterpart. That being said, we give this category to the Ford Territory as it brings more to the table at least in terms of sizing which also sets us up for the next category as well. On the inside, these two vehicles have very different approaches to their cabins. The HR-V has a more minimalistic approach to its dashboard and interior, while the Territory goes for a more futuristic and technologically advanced approach. Feature-wise they are similarly equipped, however, when it comes to their infotainment systems there is a big difference. That being said, for this category, we give the win to the Ford Territory as it comes with the more advanced feature set. However, we do have to inform you that if the infotainment system fails the vehicle will not be able to turn on its air conditioning and other related features, unlike in the Hond which has its own set of controls. So, take this information with a grain of salt when looking to buy the Territory. In terms of safety features, both crossovers are relatively on the same footing. The Honda HR-V for all of its locally available variants comes with Honda Sensing. This gives the vehicle access to features such as collision mitigation, road departure mitigation, lane keep assist, adaptive cruise control, low speed follow, and a total of four airbags.

The Ford Territory, on the other hand, gets driver, front passenger, curtain, and side airbags to keep occupants safe. Besides that, the Territory features ABS with EBD, traction control, and hill launch assist. Where it gets really interesting is the addition of adaptive cruise control, forwarding collision warning, autonomous emergency braking, blind-spot monitoring, lane departure warning, and a tire pressure monitoring system. It also comes with a 360-degree camera which isn’t present in the Honda crossover.

With all things considered we will put it as a tie for this category as each vehicle has its unique feature set that you can choose not to get without affecting its driveability or safety. Comparing the 1.5 NA to the Turbo engine of the Territory would be comparing apples to oranges. So, for the sake of this comparison, we will compare the turbo models instead. That being said, the HR-V has the advantage as it has 33 more horsepower and 15 more Nm of torque compared to its American rival. For this category, the Honda HR-V gets the win.

In terms of pricing, the Honda HR-V leans more towards the expensive side. At its most affordable it is priced at P1,250,000 for its S CVT variant. At its most expensive it hits P1,598,000 for its turbo model. Contrast this to the Ford Territory which is priced between P1,277,000 to P1,310,000 and it's not hard to see that the Honda crossover is the more expensive of the two. With that said, the win goes to the Territory for being the cheaper of the two vehicles. The Ford Territory and the Honda HR-V offer you two different approaches to a crossover. One leans more towards the simple side with usable features that won’t catch a non-techie person off-guard. These features just work and enhance your daily driving experience. The Honda Sensing safety suite also makes the HR-V safer to drive as well and its low speed follow mode takes the strain off while in stop and go traffic. Its adaptive cruise control is also great, especially on longer trips.

The Ford Territory, on the other hand, packs the tech in big time. While it is down on power, it has a bigger infotainment system and comes with features a younger audience might appreciate. While the tech is there, it can be overwhelming to certain drivers. That being said, we can’t deny that the Territory offers you so much more for much less, as there is almost a P300,000 gap between the top variant of the Territory versus that of the HR-V. To conclude, the Ford Territory wins this comparison as it offers you a lot more for a lot less.