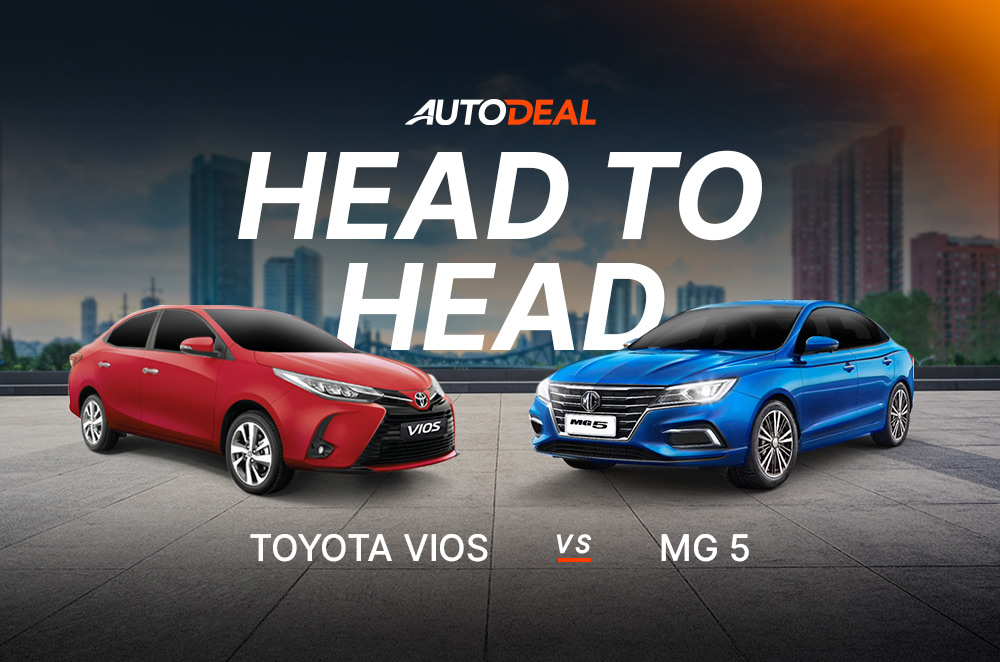 In a crowd composed of several subcompact sedans, the Toyota Vios has become a well-established player, with Filipinos showing much love and patronage for the renowned model throughout its different generations. Just recently, the Vios range has been updated, with it now having a sportier GR-S trim that sits atop the G. The car even gets other notable equipment such as the inclusion of a better infotainment system on select variants. Now, the question is, are the upgrades enough for it to keep up with its competitors?

The MG 5 nameplate was only introduced in 2019. Despite that, it's got enough guts and packs a generous amount of goodies that could possibly give the Vios a run for its money. With that said, we shall compare the two subcompact sedans in each of their respective variants, namely the Toyota Vios 1.5 G CVT versus the MG 5 1.5 Alpha CVT. Given the close pricing range between both models, we shall then see if which among the two is worthy of the top spot. That said, let’s proceed, shall we? In terms of design, the MG 5 looks more simple and clean yet it doesn’t offend, in fact, its well-planted lines and less curvaceous profile give it a more upmarket presentation. The Toyota Vios, on the other hand, looks more radical and youthful, it still sports that familiar curvaceous shape given that it’s just a heavily revamped model.

Standard exterior features on both models include LED headlights with daytime running lights, 16-inch alloy wheels, side repeaters on the side mirrors with a power-folding feature, and combination LED taillights. Only the Vios G gets LED fog lamps and chrome accents, while the tires installed on the MG 5 Alpha’s are thicker and wider, specifically 205/55 versus the Vios G’s 195/50 rubbers.

Aside from its larger dimensions, the MG 5’s overall looks did appeal to us more, plus, its exterior features appear to be quite good for its price. Then again, beauty is subjective and the Vios is also quite a looker, in fact,  some would actually prefer the looks of the Toyota over the MG. However, based on our personal taste, the overall winner of this round is the MG 5 Alpha. The Vios and MG 5 both stand strong in terms of space and practicality. Aside from the generous passenger space, both subcompact sedans also offer a good amount of trunk space for your valuables. The MG 5 gets a bigger boot with it having 500 L of space, while the Vios only has 326 L. It goes to show that the more extensive dimensions of the MG 5 present an advantage.

In terms of layout, the dashboard of the MG 5 Alpha and Vios G appear to be both simple yet intuitive. Though, the overall execution and presentation on the MG 5 does seem more pleasing to the eye. Standard interior equipment includes a push-start button along with smart keyless entry, a single-zone automatic climate control, and a 6-speaker audio system. As for in-car entertainment, the MG 5 Alpha comes with a large 10-inch infotainment system that has various multimedia functions including Apple CarPlay and Android Auto, it is also where its 360-degree camera system is projected. The Vios G, on the other hand, features a smaller 6.75-inch touchscreen display, like the MG 5, it also comes with various functions including Apple CarPlay and Android Auto. Instead of a 360-degree camera system, the Vios G comes with a regular reversing camera.

There are some MG 5 exclusive features to note though, first is the sunroof which does add a good amount of lighting into the cabin, leather seats with power-adjustability for the driver, therefore giving a slight stash of premium feel. Lastly, is the cruise control, which should help you achieve a more convenient drive on the highway.

Undeniably, both cars have a pleasing, spacious, and well-equipped interior, with the two having the right amount of convenience and high-tech features for both the driver and its passengers. However, the MG 5 Alpha did better given that it offers more space, a simpler yet intuitive cabin, and it also has more interior features when compared to the Vios G. With that, the MG 5 Alpha, serves as the overall winner of this round. Both the Toyota Vios G and MG 5 Alpha come standard with Anti-lock Braking System (ABS), Electronic Brakeforce Distribution (EBD), brake assist, stability control, child lock, ISOFIX child seat anchors, and airbags (driver, front passenger, side, curtain) while only the Vios G comes added with a knee airbag for the driver. While the Toyota gets a conventional handbrake and a regular backup camera, the MG has an electronic parking brake with auto hold and a 360-degree camera for easier maneuvering.

Both cars on paper are safe, the MG 5 has once again won this round given the additional tech goodies that help develop better driving confidence. In terms of powertrain, the two subcompact sedans are run by a 1.5-liter gasoline engine. The Vios G is paired with a Continuously Variable Transmission (CVT) and is able to produce 106 hp and 140 Nm of torque. The MG 5 Alpha’s engine, on the other hand, is also mated to a CVT, although it is worth noting that the car produces better power figures than the Toyota, respectively, 112 hp and 150 Nm of torque.

Given its more powerful pairing, the MG 5, once again, wins this round. Then again, we’d still give Toyota credit for continuing to reinforce the Vios with its tried and tested powerplant. The MG 5 Alpha managed to dominate each one of the categories above. Now, talking about pricing, the Vios G is a bit more expensive than the MG 5 Alpha, respectively, the Toyota currently retails at P970,000 while the MG sits a bit lower at P938,888. Goes to show that the MG 5 Alpha is giving out a lot for less when compared to the Vios G. With that, this head-to-head comparison then ends with the MG 5 Alpha being the first placer.

The Toyota Vios might have ended up being second, but it still stands strong all thanks to its loyalists that support its reputation for durability and reliability. Throughout several of its generations, the Vios was showered with much love and support, and we don’t see any reason for that to stop.