Following the update that Nissan gave its Terra, it’s now become a contender to beat in the market. With its upscale interior and its amazing set of features, the midsize SUV is once again poised to take on the other rivals in the segment.

When Ford launched the facelifted Everest in the market, the Blue Oval’s midsize contender was one of the top dogs in its segment. Recently, other manufacturers have stepped up to the plate with their own updates, and we feel that it is high time that the Terra goes toe-to-toe or Head to Head with one of its greatest rivals.

For this comparo, we’ll be fielding the Nissan Terra VL 4x4 against the Ford Everest Biturbo Titanium+ 4x4 in a bid to see which one is better than the other. 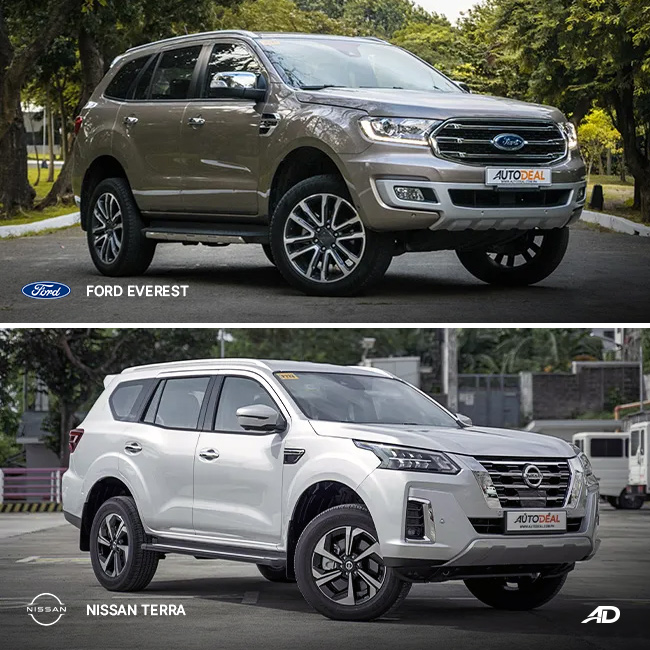 At its top-spec, the Nissan Terra gets a quad-led set of headlights with LED DRLs flanked by two LED foglights. Towards the rear, the SUV still gets LEDs for its taillights in a new design, and it gets a set of 18-inch wheels. The terra is bigger than the Everest, but not by a lot. Its dimensions come in at a length-width-and-height of 4,900mm, 1,865mm, and 1,865mm. Meanwhile, the Ford Everest also gets a set of LED lights in the front, but it gets halogens in places like the high beam and the turn signals.  It’s also got a stylish grille finished in chrome as well, but it rolls on a set of 20-inch wheels. Coming in at 4,893mm long, 1,862mm wide, and 1,836mm tall, it is slightly smaller than the Nissan, however, it does have the same wheelbase with 2,850mm to spare. With roughly the same size and a larger set of wheels, the Everest seems to have at least one dimension going for it. However, given that Ford gave it a very minor refresh when it was updated, it seems like Nissan pulls ahead with its slight advantages in the dimension department, as well as the style department. The exterior design of the Terra is thoroughly new, and you can slap on a set of 20-inch wheels if you really want it to roll on something bigger. Now, this is where the fun begins. We were quick to judge the blandness of the generation that preceded the 2022 Nissan Terra, however, we no longer have any of those complaints about the new model. Nissan have listened and put in the work for its newest SUV, cladding the interior with premium leather and soft-touch materials all around. The dashboard is also completely new for this model year, making this a bona-fide SUV that is worth the price for its stitching alone. It’s certainly Nissan’s new standard in the segment.

For the longest time, the Everest was widely regarded as one of the segment’s best options if consumers wanted a great interior. While the design holds water to this day, the model suffers from familiarity. We’re very accustomed to the Everest’s trimmings, and while it is old, it is a standard that we hold whenever we review a midsize SUV’s cabin.

However, we’re aptly amazed by the Terra’s retention of its one-touch tumble features, its screen for rear passengers, and its zero-gravity seats. On top of this, the Nissan comes with other interior color options, so if the red isn’t to your liking, you may go for a different color should the dealer have a unit that you prefer. Progress is progress, and Nissan has made strides in the segment to bring us a worthwhile update. The interior is perhaps the crowning glory of the Terra. Everything that came with the top-of-the-line Terra in the past makes a return for the 2022 model year. The Around-View Monitor that we so love is still retained but is now displayed on a more vibrant display that comes in at 9 inches and expectedly comes equipped with Android Auto, but unexpectedly comes with wireless Apple CarPlay. For those of you who haven’t tried the wireless version of Apple’s smartphone paring feature, prepare for a hassle-free connection experience without the need to untangle and bring a cable with you in the vehicle.  ON top of that, the gauge cluster also gets a slight upgrade with a larger display down the center. Speaking of displays, the Terra also gets an 11-inch rear monitor with an HDMI input for rear passengers. As for safety, the Terra gets up to 6 airbags, as well as the camera-based rearview mirror, intelligent emergency braking, forward collision warning, lane departure warning, blind-spot warning, blind-spot indicators, ABS with EBD, stability control, traction control, driver alertness monitoring, and hill-start and hill descent control. With its kit, it’s a tough package to beat, right?

The Everest puts up a fight with a similar setup minus a few features. Its infotainment screen does come with Apple CarPlay and Android Auto, but you have to bust out the good old cable for either platform. Its reverse camera and all of its infotainment functions are displayed on an 8-inch screen, and its software is Ford’s ever-present SYNC3. The instrument cluster is familiar, sporting two displays that flank an analog speedometer, and it’s got a power tailgate to aid you in your loading and unloading. As for safety, the Ford still gets the wide gamut of safety features namely up to 7 airbags, ABS with EBD, traction control, stability control, rollover mitigation, and a brake assist. More advanced features include front and rear parking sensors, the aforementioned reverse camera, cross-traffic alert, and blind-spot monitors. Active safety features include adaptive cruise control, lane-keep assist, forward collision alert, tire pressure monitoring, and automatic emergency braking with pedestrian detection. 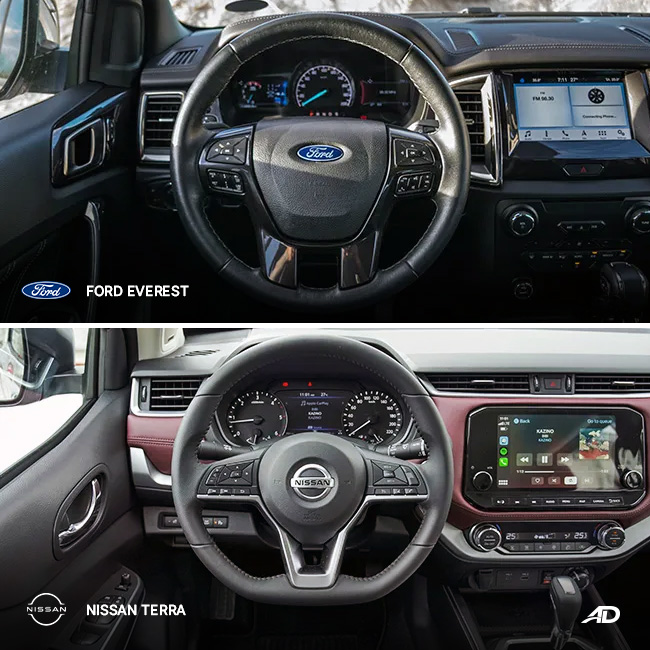 Both cars are equipped to the gills, and before we forget: yes, both of them come with ISOFIX tethers, however, we’re slightly mixed on our decision in this round. See, the Terra gets a lot of convenience features, but the Everest cranks the active safety features up a notch. Both vehicles in either camp are tough to beat and instead of giving a definitive answer, we’ll award this category to both in a tie. The winner will depend on what features you’d like the prioritize more than the other. Attached to the Terra’s ladder-frame chassis is a 2.5-liter 4-cylinder turbo-diesel engine that punches out 187 hp and 450 Nm of torque. We have little to complain about with this engine, and it is paired with a 7-speed automatic transmission.

However, the Everest one-ups it with a staggering 210 hp and 500 Nm of torque coming from its 2.0-liter Biturbo diesel engine mated to a 10-speed automatic transmission. To this day, Ford’s engine remains the most powerful in its class.

It’s quite clear that the numbers speak for themselves in this specsheet comparison. While real-world performance is better to consider, in an all-out spec war, you cannot deny the difference in numbers.

Of course, with every update, there is a corresponding price increase. Inflation plus the addition of all-new features and panels make cars more expensive over time. Certainly one must consider that manufacturers are always in competition with themselves to make things better, right?

The Nissan Terra is the more expensive option among the two, but not by much. At P2,399,000, it’s exactly P40,000 more expensive than the Ford Everest which tops out at P2,299,000. Granted, there could be promotions in Ford that will further reduce the price, and Nissan might take a while to develop promotions for the Terra.

It’s clear-cut here, but the Everest is a more affordable vehicle compared to the Terra.

This comparo was quite interesting, to say the least. While the Nissan pulled ahead with its glamorous new look, the Everest flexed its tried and tested muscles at the Terra, beating it back with tech and safety, as well as a well-padded engine spec sheet.

As such, we end in a tie, and it means that both cars are viable options out in the market. We’re not saying that this is the be-all-end-all decision, but it will depend on what matters more to you. If you like the look and feel of the Terra’s exterior and interior, it’s the one to get. If you’re more inclined toward an engine with more power along with a more affordable price tag, then go with the Everest. As an older model, it’ll fetch you a nice price if you have the right promotions to go along with it.

After all is said and done, any of the two will make for a great SUV regardless of what you want. As always, don’t forget to use our ‘Get Quote’ feature and our ‘Buy Online’ feature if you’ve decided.