If you are in the market for an affordable sedan, then two popular options come to mind, the Suzuki Dzire and the Mitsubishi Mirage G4. One is a veteran of the segment which also happens to be made in the Philippines, while the other is a relatively younger entry to the segment which recently got a minor update. With that said, we compare their specs to see which one comes out on top and showcases a better value for money option. On the outside, both sedans are similarly equipped. Both vehicles come with multi-reflector halogen headlights and can be had with fog lights for their higher trim levels. In terms of wheels, both vehicles are again on a level playing field as they can be both had with 15-inch alloys across their lineup with the exception of the Dzire GA variant as it can only be had with steel wheels.

While both are on equal terms when it comes to their exterior, it’s the dimensions where the two sedans differ. The Suzuki Dzire is the smaller of the two vehicles as it measures 3,995 mm in length, 1735 mm in width, and 1515 mm in height. The Mitsubishi Mirage G4, on the other hand, measures, 4305 mm in length, 1670 mm in height, and 1515 in width.

The Suzuki Dzire is shorter than the mirage by 310 mm. However, the Suzuki is wider than its Mitsubishi counterpart by 65 mm. For this category, we give the win to the Mitsubishi Mirage G4 as it is the longer vehicle and allows for more space to be had on the inside. 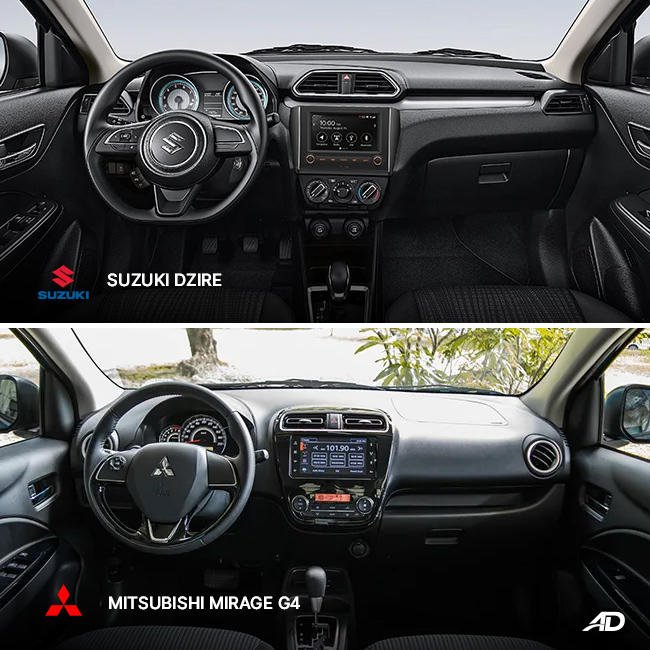 On the inside, both the Suzuki Dzire and Mitsubishi Mirage G4 come with interiors that match their exterior design. The Mirage comes with circular vents on either side but maintains square vents for the center. The Suzuki Dzire, on the other hand, takes the same design cues as its Japanese rival but chooses to go with square vents instead. Where the two differ slightly is in their choice of instrument clusters. The Suzuki sedan comes with two equal-sized gauges that flank a small rectangular digital display, while the Mitsubishi sedan goes for the same number of gauges but one is sizeably larger than the other. The climate controls between the Mirage G4 and Dzire are also similar as they feature rotary dials that control the temperature and the fan speed of the air conditioning system. For this category, we will give it as a tie as both vehicles are similarly equipped. Despite the Dzire GA only coming with a 1-DIN head unit, it is the entry-level model of the Suzuki sedan and is far more affordable than the starting variant of the Mirage G4, as such this puts both vehicles on a relatively level playing field when it comes to their interiors and their technology. 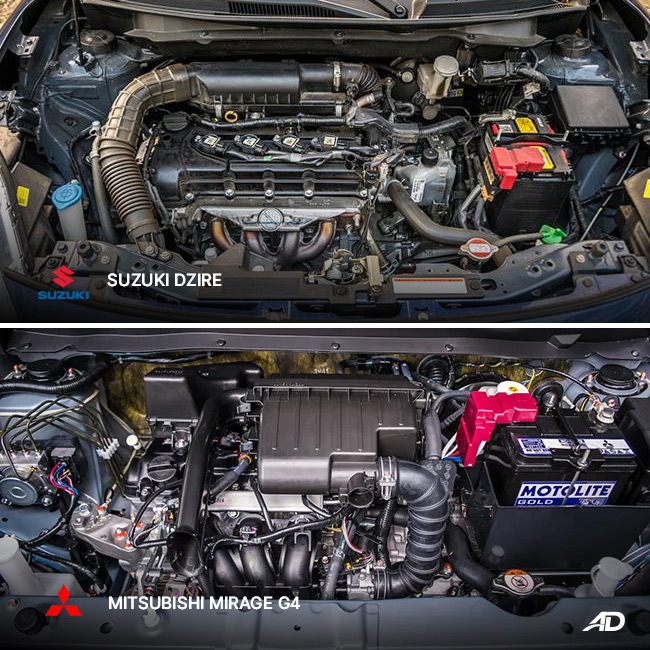 The Suzuki Dzire is powered by a 1.2-liter 4-cylinder engine. It produces 82hp and 113 Nm of torque and shifts via a 5-speed manual or a 5-speed Auto Gear Shift transmission. The Mitsubishi Mirage G4, on the other hand, is powered by a 1.2-liter 3-cylinder engine that produces 77hp and 100 Nm of torque. Like its Suzuki rival, the Mirage G4 shifts with a 5-speed manual transmission, but unlike its Japanese counterpart has the option of coming with a CVT as well. Whichever model you choose, rest assured that they will be able to return great fuel efficiency numbers both in the city and on the highway.

For this category, the win goes to the Suzuki Dzire as it comes with 5 more horsepower and 13 Nm more of torque the same displacement engine compared to the Mitsubishi Mirage G4. Plus, it gets one more piston which translates to smoother engine performance. 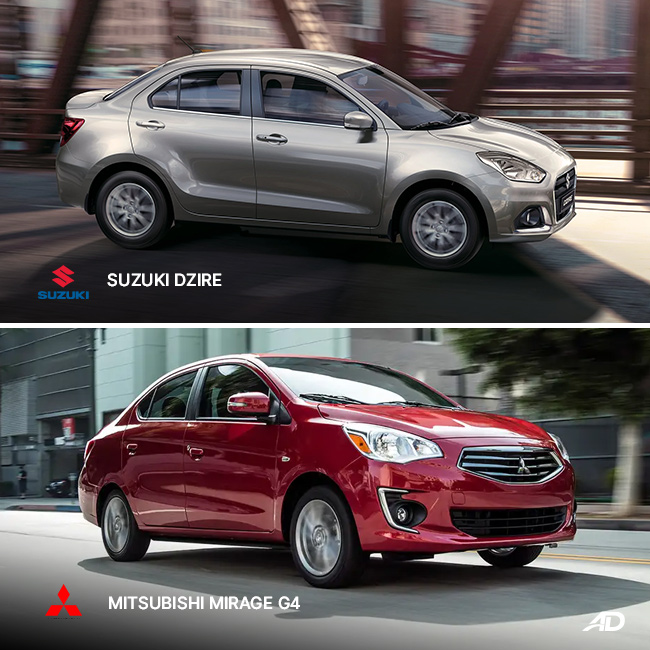 In terms of safety features, both vehicles are on equal footing. They come with the industry standard of ABS with EBD along with airbags for the front passengers. Aside from this, both have immobilizers and security alarms for the higher-end models. Given that both vehicles are similarly equipped, this category results in a tie as there are minimal differences between the two. 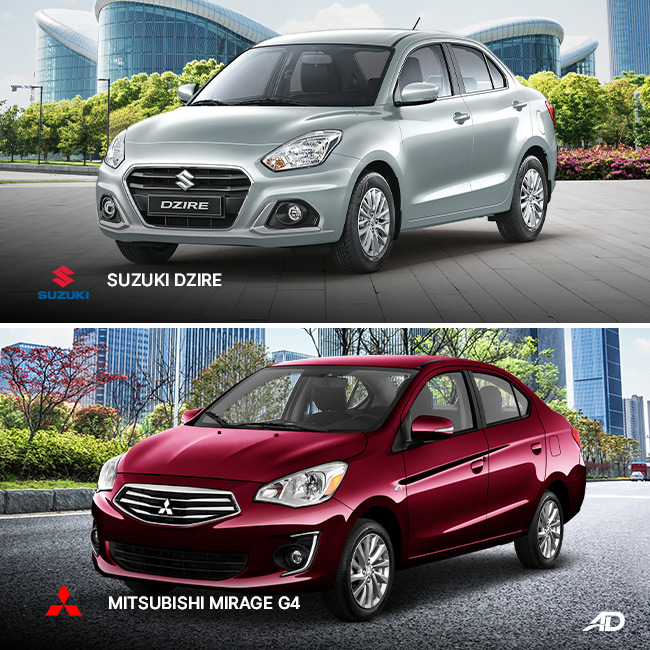 With that, the Suzuki Dzire comes out on top as the more affordable vehicle across its model range netting it the win for this category. For a lot less, you get the same amount of features and even access to a more affordable variant that is a great option for those working on a tight budget. 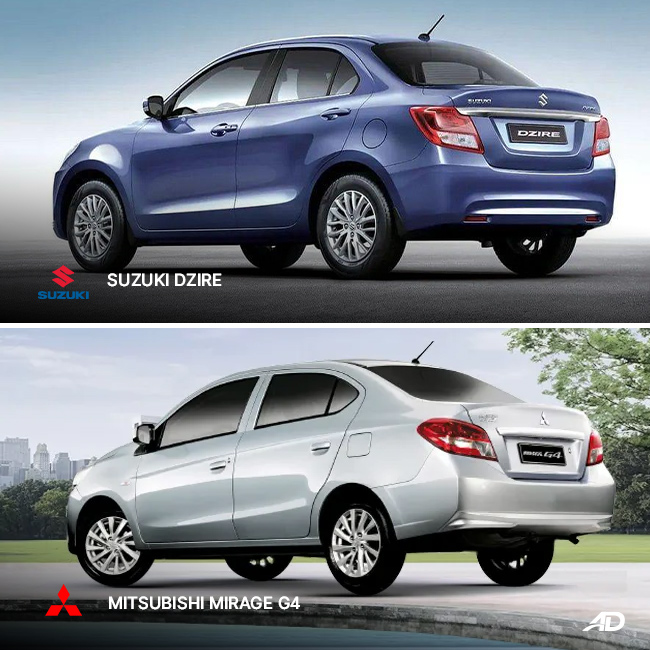 For this head-to-head comparison, the Suzuki Dzire takes the overall win. It is not only the more affordable vehicle between the two but also comes with the same features as its Mitsubishi counterpart. That said it also has a great fleet spec variant that goes well for companies looking to get a reliable and affordable mode of transportation for their employees or for those working on a tight budget but want to get a sedan.

The Mitsubishi Mirage G4 is still a great vehicle as it has come popular in the Philippines due to its well-known fuel efficiency and its parts availability. Aside from that, there is also a strong community of Mirage owners in the country which can help you with questions you might have about the vehicle. That being said, if you have questions about the car there is someone out there that is ready to help you out.

Whichever vehicle you choose, you can rest assured that you are getting a great vehicle. They both come with durable and strong fuel-efficient engines, similar features, and affordable prices that are hard to ignore. Overall, both are great vehicles that showcase a great value for money proposition.