It’s a well-known fact that the Ertiga served as the base for the Suzuki XL7. Making an MPV into more of an SUV or crossover is no new concept. In fact, Honda has been doing it for the better part of the decade now with the Mobilio serving as the base for the BR-V.

So let’s take one of the first pioneers of the SUV-like MPV concept, and put them against what is arguably one of the best options currently in the business. Let’s compare the Suzuki XL7 against the Honda BR-V. 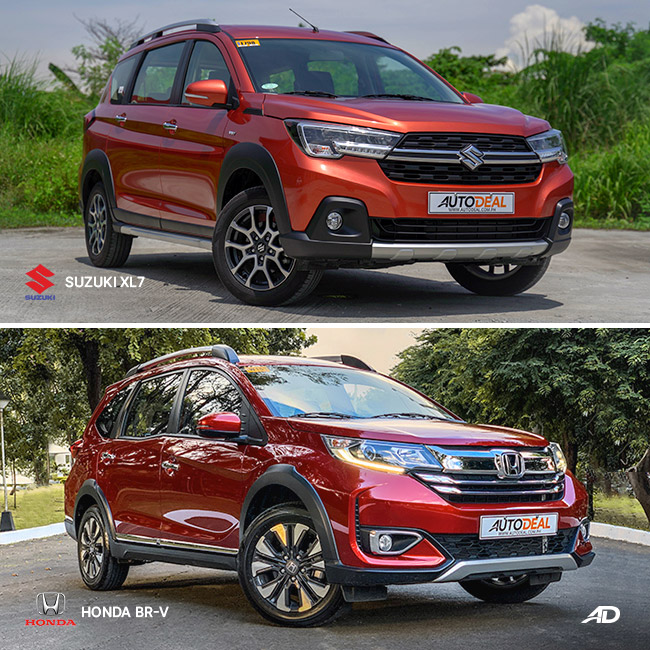 The exterior of both models features an elongated rear and a similar shape. Though, the XL7’s design does appear like it’s a lot tamer compared to the BR-V, which is ironic considering Honda’s offering is older than the XL7.

The front of both models is dominated by a set of LED headlights, and halogen fog lamps. Both models have prominent grilles, but the BR-V is more chromed-out than the XL7. Comparatively, the cleaner grille design belongs to the Suzuki with its mesh-like pattern. The Honda, on the other hand, gets a slat design.

Footwork is handled by a set of 16-inch alloy wheels for both models, and both cars have the same type of suspension, with MacPherson struts in the front, and a torsion beam in the rear. As for the dimensions, the Honda BR-V is longer than the XL7 by just 6mm, and wider by 25mm, but the XL7 makes up for it by 23mm in height, and a 78mm longer wheelbase. That being said, these dimensions will matter in our interior portion, which we will get to in a bit.

While the Honda gets top marks for staying in shape all these years, we’ll have to give it to the XL7 just because it is newer. Now, we know that style can be a very subjective topic, but newness is key if you want your car to appear like it was just bought yesterday. Granted, Honda’s design is indeed its own kind of iconic, and the BR-V just underwent a facelift a while back, but it is older and not as clean as the XL7 in our opinion. The XL7 gets the win, but just by the skin of its teeth. The interior of both cars comes with plastic dashes, but the Honda carries a few soft-touch materials along with tamer trim pieces compared to the Suzuki. The XL7, on the other hand, gets similar plastic materials, slightly less soft touch, but with a hint of carbon fiber-like trim pieces that may as well be the real deal. If you splurge for the top-of-the-line BR-V however, you get red and black leather which is absolutely great in comparison to Suzuki’s all-cloth upholstery.

Space-wise, the XL7 is a little cramped side to side. The legroom is good, but it is a little tight in the second row if you’re trying to squeeze in three people. The BR-V, meanwhile, is roomy all around. This goes back to the dimensions of each vehicle. The Honda is wider, but the Suzuki is longer, which leads us into… Meanwhile, on the technology front, bot cars get Apple CarPlay and Android Auto compatibility, but the XL7 trumps the BR-V infotainment by about 3 inches. The 10-inch screen in the Suzuki is absolutely massive and dwarfs the Honda’s 7-inch system. Both models also get a backup camera, so parking and reversing will not be a problem for either, but the XL7 gets a slight advantage in the tech department because it has reverse sensors.

For the interior category, it’s a bit close. The Honda BR-V may be a bit dated, but it has a leather interior with red accents to spruce things up. Suzuki fires back, however, with an infotainment system that is absolutely massive and gets the job done nicely. We enjoy the tech package in the Suzuki a lot more, trading just three inches of screen size gets you leather, and that’s where the Honda BR-V makes its comeback. Both vehicles come with 1.5-liter gasoline engines, but there is a stark difference between how Suzuki makes its engine compared to Honda. The BR-V was the most powerful in its class, while the XL7 is somewhat of an underdog.

With just 103 hp and 138 Nm of torque, the XL7 won’t win any drag races. It has a 4-speed automatic transmission as well so that at least makes its operation rather familiar. We were, however, very surprised with the way it was able to sip through its fuel. Among the two, it is the more fuel-efficient, and it even bagged a few spots on our fuel efficiency lists.

Again, Honda stated that the BR-V is the most powerful in its class, but it was since overtaken by a crop of affordable turbocharged 1.5-liter engines from other competitors. Still, it’s the most powerful naturally-aspirated motor which means that there are fewer parts to go wrong if they do wind up going bad. With 118 hp and 145 Nm to spare, the Honda will drive a little more spritely than the Suzuki. It is paired to a CVT, but it’s not all that amazing in terms of fuel economy. With great power comes less fuel economy?

However, you won’t be drag racing these cars anytime soon, right? Hopefully not. For us, you’d be better off with exemplary fuel economy. The XL7 delivers on that front, while the Honda is a bit more exciting to drive, but only marginally so. Being in the same segment, both vehicles only come with driver and front passenger airbags.  In addition to that, both vehicles get stability control, along with ABS and EBD. Both models also have ISOFIX tethers and each of the brand’s “special” platforms.

Since both models have the same set of safety features, it’s a tie between the two. The XL7 is the more affordable of the two as it retails for P1,073,000. In contrast, the BR-V goes for P1,158,000 for its top spec V variant. You can, however, get the BR-V for just P1,038,000 for the S variant and you’ll still get the more powerful engine and space, but the infotainment system does suffer a bit as it loses its Apple CarPlay and Android Auto functionality. On top of that, you get a standard cloth interior.

The closes comparison would be the Prestige variant of the Honda BR-V coming in at P1,075,000, but even then it’s still no as great of a value as the Suzuki XL7 which is still P2,000 more affordable. So the new kid on the block trumps the tried and tested veteran. With its frugal engine, clean looks, and killer price tag, the XL7 takes the cake, but not by that much. Fans of Honda cars will be quick to rally behind the BR-V because of how it drives and the prestige associated with the brand.

However, the platform is in dire need of an update, and its interior needs to fit in a bigger infotainment display. You will enjoy driving the BR-V more, but not by a mile. The Suzuki drives admirably as it is, with surprisingly good fuel economy so it wins against the BR-V in this comparo.

If we’ve helped you decide, do check out each of these cars’ model pages and get a free quote. Again, it’s absolutely free. You can also purchase cars using our ‘Buy Online’ feature if you’re so sure.