As a young professional, looking for and buying your first vehicle can be a daunting process. There will be a lot of research involved especially if you aren’t in the know when it comes to all the available models in the local automotive market. That being said, we have created a list to help you find the right vehicle for you that comes with a price tag below the P1,500,000 mark. This opens the choices up to crossovers and MPVs that can be adapted to your current and possibly even your future needs as a family vehicle. The Kia Stonic enters the list as an affordable yet feature-packed crossover that presents itself as an ideal vehicle for young professionals. It comes with a “style that’s iconic” and even sports a frugal 1.4-liter gasoline engine. Its power plant produces a healthy 98 hp and 132 Nm of torque. While it may not seem like a lot on paper it’s still enough to get around the city and to go on the highway. It also features an 8-inch infotainment system that has Apple CarPlay and Android Auto capabilities, a great feature to have especially for the tech integrated times.

Despite its compact nature, the vehicle comes with a good amount of ground clearance that lets it easily take on the uneven roads of the country and wade through light floods. Coming with a price tag well below the limit, this South Korean crossover is definitely worthy of a spot on your shortlist. Crossovers have become a popular vehicle of choice in the Philippines as more and more models have entered the market all coming in with affordable pricing. The MG ZS is no different as it is a veteran of the segment. It offers interested customers a host of features normally seen in higher-tier vehicles but at a price that won’t break the bank. It even comes with a frugal 1.5-liter gasoline engine that produces 114 hp and 140 Nm of torque for those who want to maximize their fuel economy. That said, if you want a vehicle in the subcompact crossover segment, then the MG ZS could be the choice for you. If you want a crossover with a little more pep in its step that also comes feature-packed, then the Geely Coolray fits the bill. Unlike the rest of its competitors, this model comes with a 1.5-liter turbocharged gasoline engine that produces 177hp and 255 Nm of torque, making it one of the more powerful vehicles on the list. Aside from this, the crossover also features a 360-degree camera and even comes with a park assist feature. With an affordable price tag, a powerful engine, and a great number of features, the Coolray is an ideal choice to buy if you want a sportier drive. The Honda BR-V brings to the table SUV-like looks with the versatility of an MPV. While still classified as the latter segment, it’s a tried and tested model. Similar to the other entries on the list, it comes powered by a 1.5-liter gasoline engine that pushes out 118 hp and 145 Nm of torque making it one of the more powerful options that come with a naturally aspirated motor. As this is now the updated model, it now gains access to features such as Apple CarPlay and Android Auto. The BR-V is ideal for those who want a versatile platform that can be adapted to your needs and comes with a price tag that won’t break the bank. 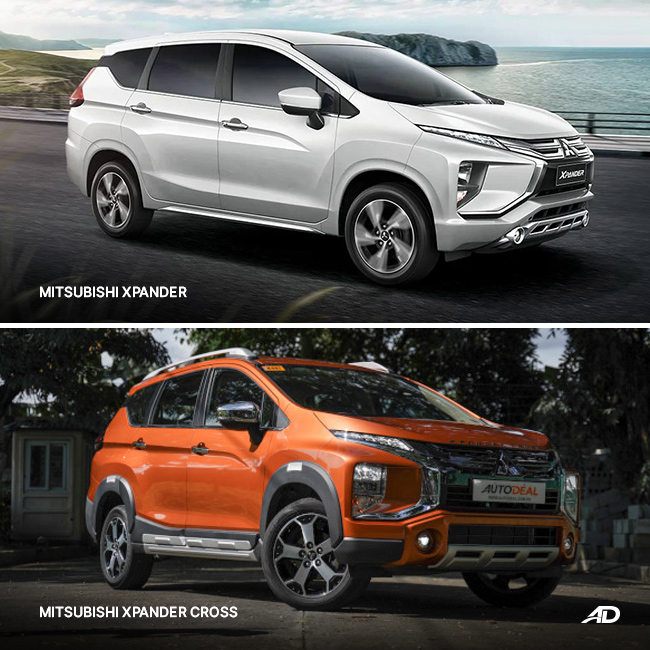 Another great choice for those looking to get a 7-seater vehicle is the Mitsubishi Xpander and its Xpander Cross variant. Together these two offer everything you need in an MPV along with the option of getting SUV-like ground clearance from the Cross model. It’s a versatile platform that can be adapted to work or family use thanks to its folding seats and interior space. While it’s powered by a 1.5-liter naturally aspirated gasoline engine that produces 103 hp and 141 Nm of torque, it’s still enough to get the MPV up to highway speeds. The Xpander is an ideal choice for young professionals who want an adaptable vehicle that can also double as a family vehicle down the road. Another crossover to make it on the list is the Volkswagen T-Cross. As a global model to come from the German automaker, it presents itself as a youthful vehicle that is ideal for young professionals. It even comes with a frugal engine to match in the form of a 1.5-liter naturally aspirated engine that pushes out 111 hp and 145 Nm of torque.

It sets itself apart from its competitors by having a bright interior and has a host of features that even new and veteran drivers will enjoy. It even has gesture control for its infotainment system that also comes with Apple CarPlay and Android Auto capabilities. This is definitely a vehicle worth considering if safety features are your concern as it comes with autonomous braking and a frugal gasoline engine. For those who want a bigger crossover that can easily seat seven people, the Maxus D60 is here to answer that call. Not only does this crossover come with an affordable price tag well below the P1.5 million budget, but it also comes well equipped. It features an 8-inch infotainment system that has USB, Bluetooth, and AUX-IN connectivity. To match its large size, the D60 also comes powered by a 1.5-liter turbocharged gasoline engine that produces 167 hp and 250 Nm of torque that sends power to the front wheels via a 7-speed dual-clutch automatic transmission. The Maxus D60 is ideal for those who want a much larger vehicle that can also double as a family vehicle if needed. A new entry to the market that also comes feature-packed is the Chery Tiggo 7 Pro. It’s a 5-seater crossover that comes with a lot of modern features. It is equipped with 10.25-inch infotainment that is further complemented by a 7-inch fully digital instrument display. Aside from this the vehicle also has Bluetooth, USB, AUX-IN, and Apple CarPlay connectivity. It also comes with a 360-degree camera to make maneuvering the vehicle as well as parking it much easier.

The Tiggo 7 Pro is no slouch either when it comes to power as the crossover is equipped with a turbocharged 1.5-liter gasoline engine. The power plant produces 145 hp and 210 Nm of torque that shifts via a CVT with 9 simulated gear ratios. Overall, this is a balanced crossover for those who want a little more space with modern features. A new entry from Ford Philippines into the competitive crossover segment in the country is the Ford Territory. As it stakes a claim in its local territory, the crossover comes well equipped with modern features needed for the young professional. The centerpiece of the cabin is the 10-inch touchscreen infotainment system that is capable of Android Auto and wireless Apple CarPlay functionality. The vehicle also comes with wireless charging capabilities and even comes with ambient lighting which can help set the mood inside the cabin. aside from this it also comes with a host of safety features that even veteran drivers will appreciate.

Powering the crossover is a 1.5-liter turbocharged motor that produces 141 hp and 225 Nm of torque. It sends power to the front wheels via a CVT that also helps it maximize its fuel economy. Overall the Ford Territory is a great vehicle to consider especially for the techies out there as it comes feature-packed and with an affordable price range. If you want a vehicle that comes with all-wheel drive and is on a tried and tested platform, then the Suzuki Vitara AllGrip is the one for you. It comes with its own terrain management system and all-wheel drive which makes the vehicle ideal for those who often travel off the beaten path. While it isn’t a full-blown off-road-ready SUV, it can make short work of dirt roads and light trails.

Aside from this the crossover also comes well equipped as it features a large 10-inch infotainment system that has Apple CarPlay and Android Auto Connectivity. Feature-packed and affordable is the name of the game when it comes to the Suzuki Vitara AllGrip as it presents itself as an ideal for those who want a balanced vehicle for both work and play.