After a stormy start to 2020, and with the horizon still a little gloomy, many of the things we thought would be mainstays in Philippine car-buying, didn't remain the same. The Filipinos’ love for 7-seat vehicles was once thought to be unshakable, but tough economic times have and the new normal has forced some to consider buying a new car or consider looking at a smaller and more compact option if they’ve previously looked for a bigger automobile. Based on our Industry Insights H1, based on inquiries and sales figures, MPVs no longer reign supreme.

The segment to take the brunt of this phenomenon is the 7-seat MPV category, which is otherwise known as entry-level SUVs for some brands. Subcompact sedans, crossovers, and hatchbacks took a sizeable chunk out of the share of the MPV’s inquiries. While one can assume that it is because of an influx of new prospective buyers in the market, another may also assume that people looking to buy an MPV are now downsizing in the interest of financial security.

In the last 7-seat affair In Q1 of 2020, the model with the most interest was the Toyota Rush. Commanding a sizeable lead over almost anything else in the market. Next to that model was the Mitsubishi Xpander, another 7-seater that has been trading places with the Rush since last year. Now, that dominance has been eroded by the demand for more entry-level mobility. Then the other nameplate coming in third was the Toyota Innova, another 7-seater MPV that is manufactured locally.

Like we stated in our previous articles about entry-level mobility, the Philippines is experiencing a paradigm shift. Offices are less crowded, families are literally getting closer to each other in the confines of their own homes, and fewer people are outside. People-haulers are becoming much less of a necessity since family outings and road trips won’t be the normal any time soon.

Related: Entry Level mobility could spike in the next 12 months – Here's what we expect

Back to the subcompact Only a few short months after the slew of alphabet soup community quarantine measures set in place, the tides have shifted away from these MPVs, and now the spotlight is on smaller forms of mobility. The top contender is now the new Toyota Vios. With the launch of a facelift only further spurring consumer interest in the model, the subcompact sedan is as quintessential as they come. Toyota’s reliability coupled with the local manufacturing prowess of Toyota Motor Philippines (TMP) piqued the interest of many even during uncertain times. When you want your car to last you a while, it seems that people gravitate towards Toyota because following the number one slot is the Toyota Wigo. As the most entry-level hatchback and automobile in the Toyota lineup, the Wigo is just right behind the Vios. The model got a refresh in the first half of the year, and it could be the reason why inquiries were also quite bolstered.

Though in the third, we see that Suzuki is spearheading its charge with the Suzuki S-Presso. This small car made its debut before the quarantine period without a big launch accompanying it. However, with a price point as low as the S-Presso’s, the demand for personal mobility, and heaps of personality, the S-Presso has earned a lot of interest from consumers, even becoming one our most-viewed video reviews in recent memory on our YouTube channel. 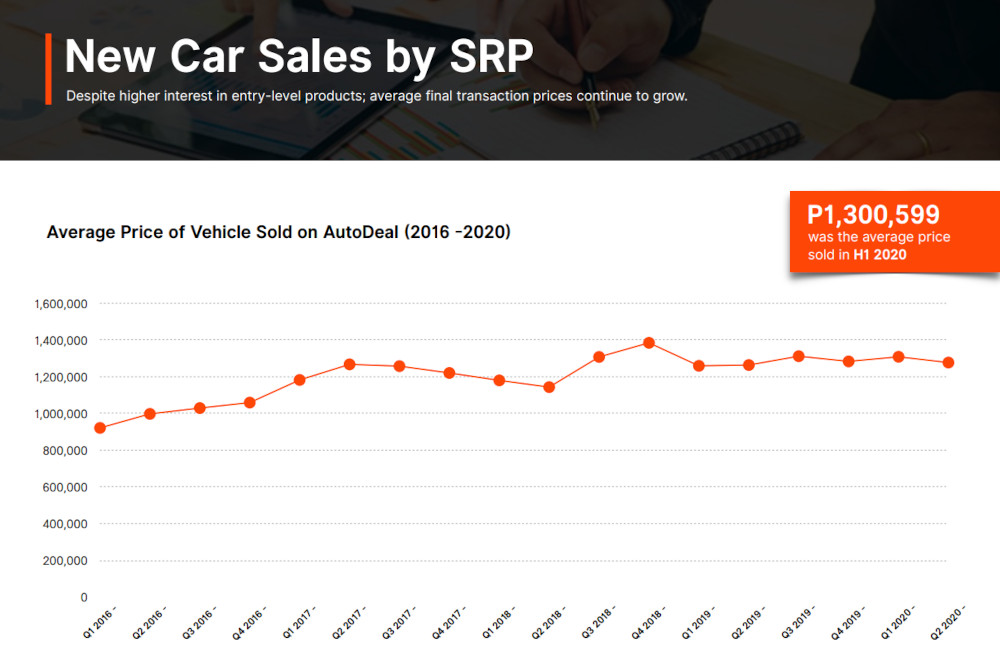 However, there is one hold out in the 7-seat MPV category seemed to stand its ground, and even moved up a place. The Suzuki Ertiga was able to keep itself in its high spot in our top 40. It could be because Filipinos are still looking for 7-seat MPVs, but the sub-P1,000,000 price tag makes the Ertiga such a compelling option. The average price of vehicles sold in H1 of 2020 also went down slightly, but not enough yet to make us assume that consumers on AutoDeal are buying down to sub-P1,000,000 cars just yet. We’re also of mind to think that the pickup segment in the Philippines is the main contender for the consistency of the average price. Most mid-range 4x2 or even 4x4 models in the market on AutoDeal sell for around that average price, and as of the first half of 2020, the pickup truck emerged on top of all other body types, and following closely behind it is the subcompact car segment, which is now what we think will be the segment that consumers will be shopping at least for the time being.