The Toyota Innova is a compact MPV and is one of the best-sellers of Toyota Motor Philippines. With its 7-seat capacity (8 in some variants), raised ride height, and diesel mill, the Innova has become a perennial choice in the MPV segment. Because of this, the Innova is constantly present as an annual top-seller – a testament to its appeal to Filipino car buyers.

The Innova shares its platform with the Hilux and Fortuner, and is assembled in Toyota's assembly plant in Santa Rosa, Laguna. Last February 20, 2021, the facelifted Toyota Innova made its Philippine debut. Aside from the mild exterior updates, and a few more standard inclusions for lower variants along with other additional features.

The second-generation Toyota Innova was launched in February 2016 with four variants. Fast-forward to February 20, 2021, and the Facelifted Innova already made its way to the Philippine market with a total of six variants: The base model J, the lower tier E that's available in either manual or automatic, the middle child G Diesel that can also be had in either manual or automatic, and the top-of-the-line V variant. The gasoline option has been axed already, which means the sole engine available for the Innova is the tried and tested 2.8-liter diesel engine. Power figures vary depending on the variant.

Pricing of the second-generation facelifted Toyota Innova starts at P1,186,000 and goes up to P1,739,000. Opting for the White Pearl Crystal Shine will, therefore, require buyers to shell out an extra P15,000.

Stopping power for the Innova comes from ventilated discs up front and leading-trailing drum brakes for the rear. The MPV rides on an independent coil spring, double-wishbone with stabilizer suspension for the front and the rear gets a 4-link coil spring system. Steering comes from a Rack and Pinion Power steering system. Unlike its competitors, the Innova does not use EPS and still utilizes the older Hydraulic Power Steering system.

The 2.8-liter turbo diesel paired with either a 5-speed manual or 6-speed automatic achieves maximized performance for the MPV. Also, thanks to the new suspension of the Innova, the ride has improved. One caveat to this, however, is that some may find this new suspension set up too soft and floaty. But overall, the new suspension setup is a notable improvement compared to the previous model.

The V and G variants of the Innova feature a 7-inch infotainment system that comes ready with Apple CarPlay and Android Auto along with a 6-speaker audio system. While E variants, on the other hand, get a slightly smaller 6.75-inch screen, yet it still supports the same functions of the larger infotainment system. As for the J variant, it gets a more basic 2-DIN radio that comes with several audio functions including CD, AM, FM, Bluetooth, USB, and auxiliary, plus, it also gets fewer speakers compared to the rest of the range. Lastly, V and G variants of the Innova get automatic climate control and push-start ignition.

The MPV comes with Intermittent wipers with time adjusters and with a mist function, which is standard for the V and G variants. The rear wiper is standard across the line but does not come with any intermittent functions. As for the E and J spec variant, the wipers are only intermittent and mist.

The Toyota Innova's exterior features LED projector-type headlamps with clearance lamps for the V variant, while the rest of the lineup gets multi-reflector halogen headlights. For fog and driving lamps, the V-spec Innova comes with LED fog lights while the rest of the lineup except the J variant gets halogen fog lights. The outside door handles of the Innova come in the form of a grip-type handle with chrome accents for the V and G variants. E and J variants, on the other hand, only comes with color-keyed door handles.

On the interior, the Innova features seating for 7 for the V variant of the MPV and 8 for the rest of the lineup. Seat material for the whole lineup is treated in fabric that varies in color from variant to variant. The main interior color of the vehicle is black with silver accents across the dashboard and on the aircon vents. The passenger dash accent, however, will change in trim depending on the variant of the MPV. You also get ambient lighting in the G and V variants of the Innova. Prior to the 2021 year model, only the 6-seat V variant would get this option, but the 7-seat G variant comes standard with this addition.

The V variant gets second-row captain chairs as well as tray tables located behind the front seats. The G variant also gets these foldable tray tables. When not in use these tray tables can easily be stowed away.

The Toyota Innova safety features include airbags for both the driver and passenger, along with side and curtain shield airbags. The driver gets the added bonus of having a knee airbag as well. On top of the airbags, the MPV comes with vehicle stability control, hill-start assist, and an emergency brake signal. It also comes with ABS as standard for all variants, including EBD.

Seatbelts are plenty in the Innova as the second row of seats get 3-point seatbelts along with ISOFIX tethers for child seats. The driver and front passenger also get the same treatment upfront. The third row also comes with 3-point seatbelts for all rear occupants. Side impact beams are standard across the lineup as a passive safety feature. The G and V variants of the MPV come with backup sensors. In addition, the vehicle comes with a security system and with an immobilizer. Unfortunately, the rest of the lineup does not have these features as standard. View the most compared cars versus the Toyota Innova 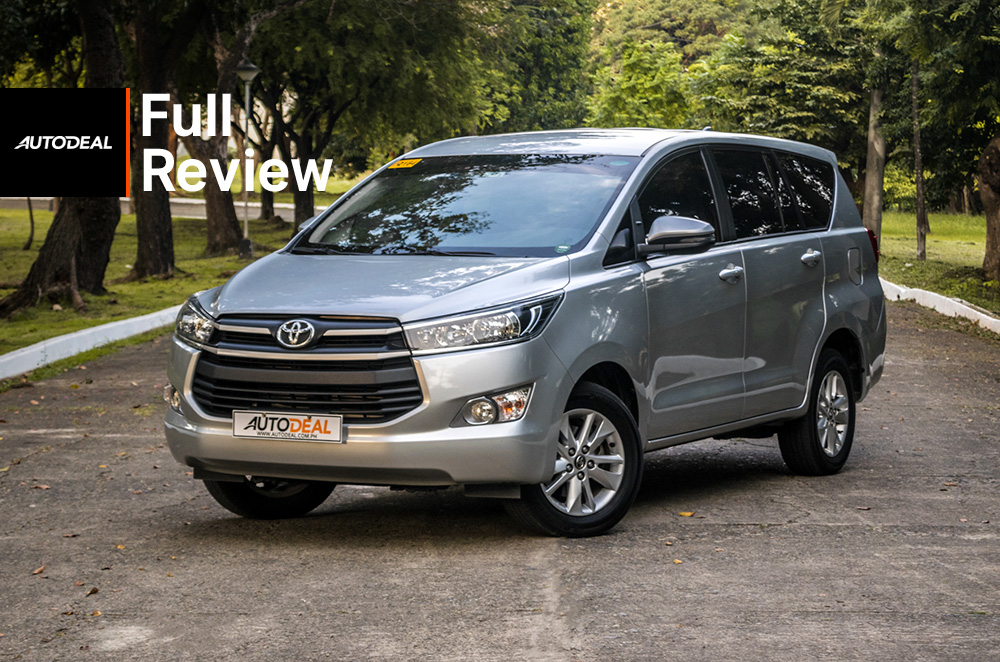 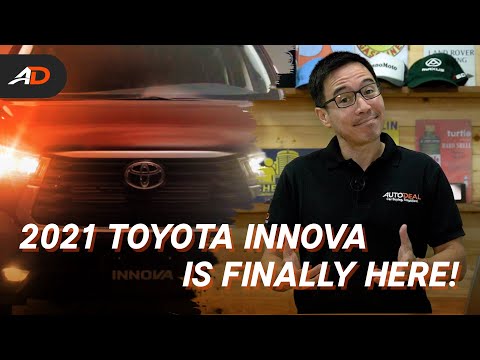 Write a review about your Toyota Innova and help other shoppers decide if this is the car for them.

Which engine oil is best for the Toyota Innova?

The diesel engine of the Toyota Innova is best paired with synthetic oil.

Is there still a gasoline variant available for the Toyota Innova?

Toyota Motor Philippines axed the gas variant of the Innova after the MPV received a facelift in 2021. Therefore, the Innova is solely available with a 2.8-liter turbocharged diesel that's shared with the Toyota Fortuner and Hilux.

Is the Toyota Innova a 7-seater?

Most variants of the Toyota Innova has 8 seats, with the exception of the high V variants that are equipped with captain's chairs, therefore only able to seat 7 people on board.

Is the Toyota Innova an SUV?

Despite its body-on-frame construction, the Toyota Innova isn't an SUV. It's an MPV that's aimed to provide comfort and flexibility as a family vehicle.

Get Notified for Toyota Innova Alerts