We can’t deny that Filipinos have grown fond of the Toyota Innova. The compact MPV is the perennial family car that offers utmost practicality without breaking the bank, picking up where Toyota AUVs, the Revo and Tamaraw FX, left off. Ever since its introduction in the mid-2000s, the Innova has constantly been selling well year after year – a solid manifestation of its appeal to the majority of Filipino car buyers.

The second-generation Innova is turning four this year, unfortunately without any substantial update. For this review, we take a 2019 Innova 2.8 E Diesel AT to a week-long test to see if it still has what it takes to be hailed a box office hit even with its age.

Performance
Engine Output (HP), Acceleration, Transmission, Handling 4.0/5
Design
Exterior & Interior Design, Quality, Fit and Finish, Ergonomics 3.5/5
Ride Comfort
Cabin Comfort, Suspension, NVH Insulation 3.5/5
Safety and Technology
Convenience Technologies, Active and Passive Safety Features 2.5/5
Value for Money
Amount of the vehicle you get for the price, Fuel Efficiency 4.0/5
What You Will Like
What You Won't Like
How We Do Our Reviews What we like about the Innova’s exterior design is that it isn’t pretentious. It doesn’t fancy itself as an SUV; Toyota has the Fortuner for that. It’s an MPV through and through – a two-box, nose-down vehicle that lacks flair but with heft and a bit of extra ground clearance for its intended use: to ferry a family to several places.

It’s like the Mano Po film franchise, a tearjerker movie that annually got a refresh but kept its recipe to appeal to Filipino families at the height of the Metro Manila Film Festival. In the Innova’s case, it’s always the same revamp after revamp, and even after a major model change, but for good reasons. As you would expect, the Innova’s cabin won’t definitely win design awards; not on this planet, at least. But with durability in mind, the incessant use of hard plastics is aimed towards pleasing your wallet rather than your sense of touch and sight. The seats are clad in fabric, too, but the test unit that we got was covered with seat covers.

What makes the interior great is the number of usable storage areas found all around the cabin. We lost count, really, but the cubbyholes and cupholders extend up to the last row. Door pockets are also massive, so imagine all the usable space your pamangkins will enjoy during a long trip. This particular media tester lacks tables on the second row, though, which can be found in higher G variants. Another thing you’ll like about the Innova is the extent of space inside the car. It can seat up to eight people at 2-3-3 configuration, but for a more comfortable journey, you should keep that down at 6. All seats recline, while the third row is roomier than what midsize SUVs can offer. The trunk area’s spacious by default and can be maximized further by stowing the third-row seats to the sides – just like in the Fortuner.

With coil springs on all fours and multi-link setup at the back, the Innova’s ride, as expected, is bouncy but it’s better than its midsize SUV counterpart. Expect body rolls and some jarring feeling when going over unforgiving roads, plus noise isolation isn’t really the Innova’s best trait, more so when you’re the one driving. Vibration and harshness from the engine bay are massively felt behind the steering wheel, especially when slowing down and idling. Overall comfort was a bit of a plight, but tolerable even during long drives – I just wish that Toyota has wrapped the elbow rests on the doors with better cushioning. Air-conditioning’s great, too, with louvers that are present up to the last row. When it comes to tech offerings, the Innova isn’t the sharpest tool in the box. As a mid-level variant, the Innova E doesn’t have speed-sensing door locks, automatic headlights, rain-sensing wipers, cruise control, reverse camera, or even a digital trip computer. It does have power windows, audio controls on the steering wheel, two 12V sockets, and Bluetooth function on the dated 2DIN infotainment, so we’ll take that.

But then again, this is an MPV. You shouldn’t expect an MPV to have the high-tech toys you’ll likely find in crossovers and SUVs, especially if you take into account the Toyota Innova’s pricing. Of note, the Innova 2.8 Diesel AT variant that we tested here has an SRP of P1,320,000. Safety is one of the major selling-points of Toyota vehicles, but that seems to be only true for the more current cars. The four-year-old Innova only has driver and passenger airbags across the lineup (except for the V variant), while other passive safety features are limited to just ABS with EBD, ISOFIX anchors, and 3-point seatbelts for all occupants. The V variant gets extras such as side and curtain airbags, stability control, hill assist control, and brake assist.

Of note, ASEAN NCAP only rated the Innova with 4 stars for variants without stability control. 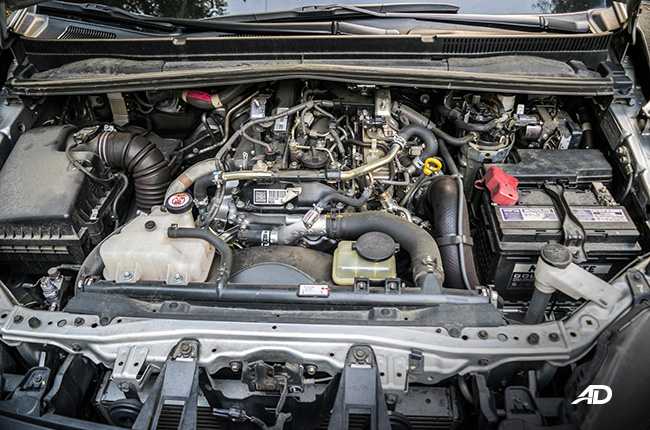 A 2.8L diesel 1GD-FTV engine resides under the Innova’s hood – the same one found in the Fortuner, albeit detuned to 171 hp and 360 Nm of torque. Even with the demerit on power output, the Innova could deliver. It wasn’t fast per se but it employed an enormous pull that could bring the heavy MPV up to speeds easily. That wasn’t without a trade-off, though, as the car lacked refinement, plus the aforementioned harshness from when you’re behind the steering wheel.

Handling-wise, the Innova has good ground feedback and has a nicely-weighted steering feel. It felt wide, however, so maneuvering through tight spaces was a challenge, which was amplified by the lack of proximity sensors. On winding roads, body roll was prominent and it wallowed ever so slightly, so it’s better to tackle these roads with care when on this car. 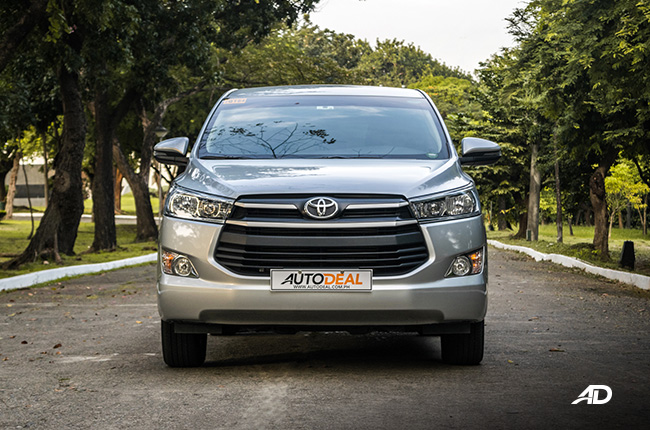 As expected from a diesel, the Innova registered impressive fuel economy numbers even with its relatively heavy weight. With two people on board, we were able to get 18.7 km/L while running at an average speed of 90 km/h on the highway.

In the city, the Innova returned 8.2 km/L after an hour of painful traverse on a traffic-laden EDSA. On better days, it clocked in 12.7 km/L at an average speed of 60 km/h. Movies and cars are very much alike when it comes to the reception of critics and consumers. Critics, or reviewers, ideally see movies and cars with deeper regard, while most consumers tend to just scratch the surface and employ personal bias. As such, critic and consumer reviews differ greatly – but that isn’t an excuse for us reviewers to sometimes wear the shoes of a normal consumer.

With that said, it’s easy to understand the Innova’s appeal. Like Enteng Kabisote, it definitely won’t take accolades and praises from critics and enthusiasts alike. I highly doubt that it’ll be embedded in history as a great car. But if Toyota will continue with the Innova’s formula for its future generations, and improve upon its shortcomings, it will definitely soldier on as a best-selling blockbuster, especially for families.

For what its worth, the Innova is the car that I will most likely recommend within Toyota’s mainstream lineup if you’re looking for a family car. It serves this role well, and does so without questions of reliability and durability. Just consider the number of old Innovas that still run today. 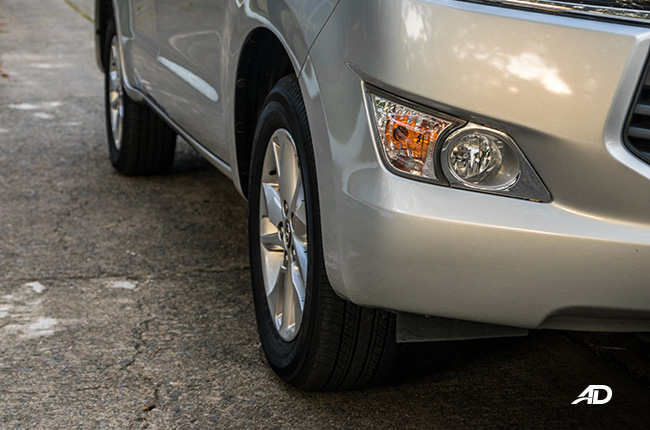 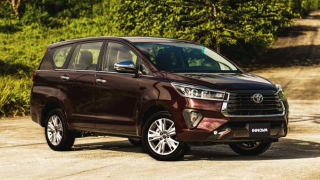