If you want a Toyota that’s ladder-framed, diesel-powered, with seven seats, and has ground clearance, you get the Land Cruiser – if money isn’t an issue. For most of us, however getting an SUV is going to cost us a pretty penny, even if we’re getting a base variant. But what if you can get premium features on a budget?

The Toyota Fortuner is possibly one of the more desirable models in the Philippines today. It is also the best-selling SUV in the market, which puts it ahead of many other models that offer similar performance.

An MPV is what some would pit against an SUV. In a sense, they’re both similar to a certain extent thanks to ground clearance, as well as seven seats. The comparison is not too far-fetched, especially with regard to the Toyota Innova, which shares the same engine options and Toyota IMV platform that the Fortuner has.

But what would happen if you took the Innova, spruced it up, and pitted it against the Fortuner’s base automatic variant? Which of these two brothers will be a better option for you? Let’s find out in this round of Sibling Rivalry. For an equal comparison, we’re pitting the Fortuner in its 2.4 G Diesel 4x2 AT variant against the Innova’s 2.8 V Diesel AT.

The reason why we’re comparing these two models is to answer the question: “If you had P1,700,000 to spend and you want a 7-seater diesel-powered car with ground clearance, do you go for a base automatic SUV or do you go for the top of the line MPV?” The Innova even in its highest trim level, comes in at P1,679,000, while the Fortuner in its base automatic variant comes in at P1,697,000. The lower price makes the Innova a compelling choice, but let’s go in-depth. 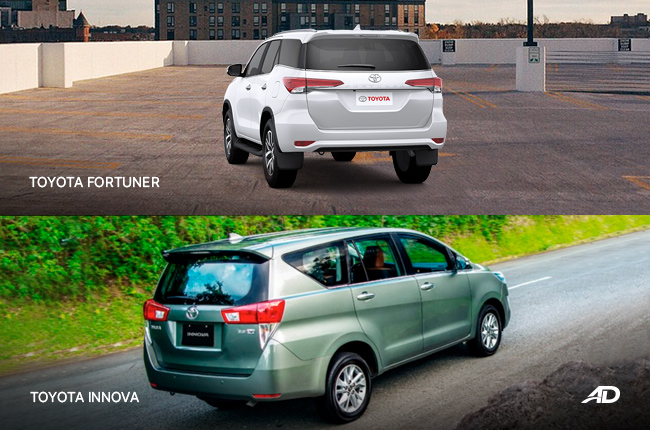 Both of these vehicles are such a common sight on the road that you won’t need to go to the dealer to get a glance. The Fortuner features fluid lines and a tall stance, while the Innova has a boxier look going for it. There are more edges on the MPV and it sits lower than the SUV thanks to its smaller wheels at 16-inches compared to the Fortuner’s 17s paired with a beefier sidewall.

With these variants, the Fortuner gets a set of projector halogen headlights, while the Innova gets a set of LED units with daytime running lights.

One cannot deny the Fortuner is the better-looking of the duo. It stands taller and prouder than the Innova, even if the MPV might be only slightly less capable since both variants are in their 4x2 configurations. You can expect a comparison that is very close in this regard. While the Innova is in its V variant, it still does not come with leather seats, bringing them closer in terms of the interior fit and finish. The dashboards of these two models are quite different, where the Fortuner has more storage space and dimension in the dashboard, the Innova has a simpler appeal that’s straightforward. Seating is where the Innova will make a compelling choice for those looking to be driven in their cars rather than being the ones driving. The V variant of the MPV has captain’s chairs while the Fortuner has the run of the mill bench that most people are accustomed to. For less money, you can get an Innova with the same seating configuration as the Fortuner if you prefer.

Cargo space is also in the same ballpark, give or take a few liters of space between each model. The Innova has more space in the third row, while the Fortuner’s is a bit more cramped. A caveat of the two models is that the third-row seats don’t fold flat, they fold and stow to the sides instead of into the floor pan, which makes horizontal space in the cargo area a challenge. The second row is able to fold as well, but even that’s not flat.

In the past, both models were seen with Toyota’s 6.5-inch display audio head unit, which had AUX, USB, and Bluetooth. This time around, the Fortuner gets a leg up against the Innova with a new 6.75-inch system that comes with Android Auto and Apple CarPlay support right out of the box. Using smartphone pairing apps like these are godsends, because not only do these head units allow you to charge right off the included USB port, it also lets you utilize the center screen for navigation, music, or any app that is supported.

One thing that you will miss if you opt for the Fortuner is the inclusion of a keyless entry system that can be found in the Innova. Other creature comforts will include the automatic climate control that the Innova comes with. The Fortuner comes with manual air conditioning coupled with only one automatic window up and down switch for the driver. Meanwhile, the Innova gets four automatic up and down windows, which is a small but very convenient touch.

In this area, the Innova holds its own, but the Fortuner’s head unit is superior in almost every way. You also get more in the way of features like Android Auto and Apple CarPlay. In this instance, the Fortuner may be devoid of quite a few amenities, but the core of what you need is there. If you’re willing to trade that smartphone pairing software for a few top of the line conveniences, by all means it’s not a bad trade.

Toyota’s safety systems inside its cars are getting better, however, since the Innova is in its V variant, the G variant Fortuner is going to lack a few airbags like the side and curtain airbag for rear passengers, but that’s about it. The MPV gets hill start assist, while the SUV doesn’t. The engine and powertrains available in both models are different, but the same. The engine block of the 2.8L motor across the models is both mechanically identical. In this comparison, the Fortuner comes with a 2.4L diesel engine that produces 147 hp and 400 Nm of torque. The SUV has a sizeable advantage over the Innova in terms of torque, but pales in comparison to the MPV’s horsepower figures.

The Innova comes with a 2.8L diesel mill that churns out 171 hp and 360 Nm of torque. This is an oddity between the two models since Toyota neutered the capable 2.8L once it’s in the chassis of an MPV. For context, the 2.8 4x4 V variant of the Fortuner has 174 hp with 450 Nm of torque. This means that Toyota detuned the diesel engine so as to not cannibalize the figures available in the Fortuner. Both engines come with the same six-speed transmission, so performance in that aspect is similar if not exactly the same.

Since the platforms are the same, ride quality and comfort are similar. Since the Innova is lighter and it runs on smaller diameter wheels, it’s slightly more behaved on bumps, but with a dependent rear suspension in both vehicles, the ride can only be so smooth.

When all is said and done, factoring in the price tag and the platform, and the premium engine, it’s hard to recommend the Fortuner unless you put a heavy emphasis on the looks, an extra seat, and the updated head unit. The Fortuner does have better ground clearance and a more detailed interior, but you can expect nice interior bits in the Innova since it is the top V variant.

So there you have it, you won’t be driving around a Fortuner, but if you are on a budget, and want features without caring too much in the way of looks, then the Innova will be perfect, especially in its V variant with captains chairs.