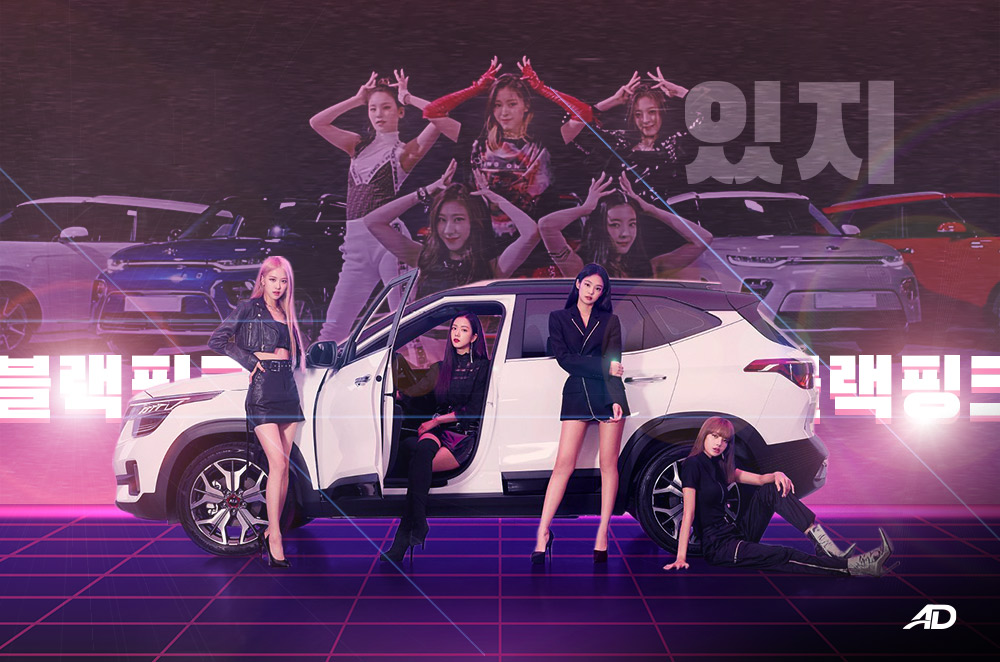 When it comes to products, endorsers do play a significant role. In fact, the following personalities somewhat affect consumers’ behavior. Today, the automotive industry has been developing several marketing strategies in order to properly promote its models. Hyundai and Kia, two strong brands that originated from South Korea have been promoting its models alongside such renowned K-Pop artists including EXO, BTS, BLACKPINK, and Itzy.

The following models are composed of familiar nameplates and what better way to echo their status with a couple of popular singers. KPOP has been consistently booming these past few years, and gladly, some of these promotions were quite successfully applied and were then converted into increasing demand. Notably, the Philippines has been part of the massive Korean movement, and perhaps, local fans might also be part of those captured or persuaded audiences by the following ad materials exhibited below.

The four-member girl-group made its debut back in 2016, and gladly, they’ve been establishing quite a good reputation in the music industry. This campaign of the group dates back to 2019, wherein the girls strikingly showcased the Kia Stinger, by flaunting the sporty capabilities of the vehicle. Though note that this is the pre-updated model, as the South Korean carmaker, recently released an updated version of the fastback.

Alongside the car, this promotion also goes by the all-female group’s 2019 World Tour, with Kia being the title sponsor.

Now, part of BLACKPINK’s tie-up with Kia is their endorsement project of the Seltos. Upon recall, the subcompact crossover made its way to the Philippine market just last year, which exhibits that hip and modern styling that can be personalized with a range of vibrant colors. Like the Stinger, the group managed to showcase the funky and stylish profile of this crossover, with the girls looking equally stunning as the Seltos.

The Hyundai Palisade is currently the largest offering in Hyundai’s global lineup. That said, what better way to promote this midsize crossover with a seven-member boy group. In this video clip, BTS stretched the true meaning of family, and notably, this happens to be one of the most effective marketing ideas yet, with the flagship Palisade garnering a whopping 59,000 orders in South Korea last February 18, 2019, which is double the estimated domestic demand of 25,000.

Perhaps, the boy group’s booming image did play a significant role in this campaign and perhaps rewarding the Palisade with such great demand.

The Kia Soul used to be part of Kia’s Philippine lineup, unfortunately, the said model was discontinued, and we kind of miss that boxy transporter. While Itzy may be a bit fresh on the industry, the girl group already bagged an endorsement from Kia, which particularly focuses on the Soul. Apart from the video clip above, the vehicle was also shown on its Dalla Dalla music video, which actually marks the group’s debut, wherein the girls utilized the Soul's Roof as a dancefloor.

The Hyundai Kona is quite a familiar nameplate here in our country. Apparently, only the standard gasoline variant is being sold here, leaving the Kona Electric still locally unavailable. Now, EXO – CBX, a sub-unit of the South Korean-Chinese boy group EXO, generated quite a buzz from its endorsement of the Kona Electric. The music video was actually co-produced with Hyundai, wherein the boys promote the Kona Electric that’s further accompanied by a catchy song.

Surprisingly, Hyundai had to stop pre-orders of their Kona electric because the cars became too popular, with a little thanks to EXO – CBX. This promotional strategy dates back to 2018, and gladly, the South Korean automaker met 150% of their 12,000 targeted pre-orders by mid-April 2018.

KPOP groups carry a certain image and appeal to specific audiences, one that car manufacturers in Korea have been trying to associate with. Don’t even get us started on product placements in K-dramas, because that’s an entirely new list on its own. It was quite successful for both of these Korean brands to have utilized the following artists, especially Hyundai wherein it managed to render booming numbers in its figures.

Numerically speaking, Hyundai achieved 59,000 orders in South Korea last February 18, 2019, for the Palisade with its BTS endorsement. As for the Kona, its promotional strategy with EXO – CBX made Hyundai meet 150% of its 12,000 targeted pre-orders during mid-April of 2018.