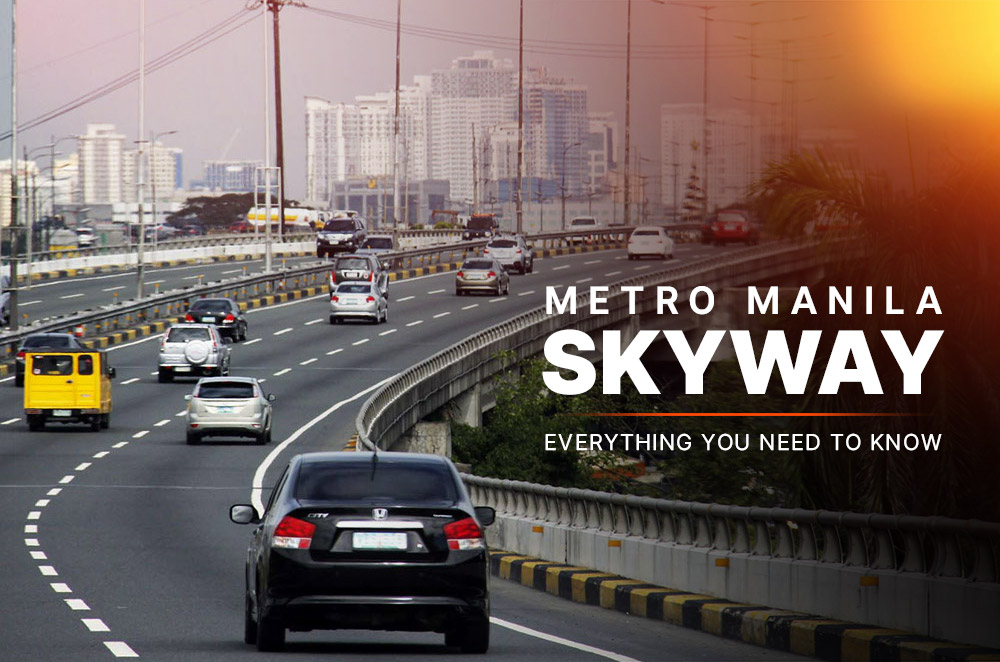 The Skyway, also officially known as the Metro Manila Skyway system, is an elevated highway that serves as the main expressway in Metro Manila. The elevated roadway connects the North Luzon Expressway (NLEX) to the South Luzon Expressway (SLEX) by going over existing roads to make a more straightforward connection between the two. Skyway stretches from the Balintawak area in the north and goes all the way to the Susana Heights area in the south.

Skyway also has the distinction of being the first fully grade-separated highway in the Philippines. It is also in the running for being one of the longest flyovers in the world, with a total length of approximately 42.79 kilometers, with even more plans to extend the roadway.

The Metro Manila Skyway is part of the Asian Highway Network (AHN) which is an important set of routes throughout Asia of international significance. Asian Highway 26 (AH26) is just one of those important routes which is located in the Philippines. The highway itself stretches from Ilocos Norte all the way to Zamboanga City in Mindanao. This highway system is connected via bridges and by Roll-On Roll-Off (RORO) craft to make traversing from one island to another much easier. The Skyway Stage itself is just a part of this system that caters to the Metro Manila area, which enables motorists to easily travel from north to south. 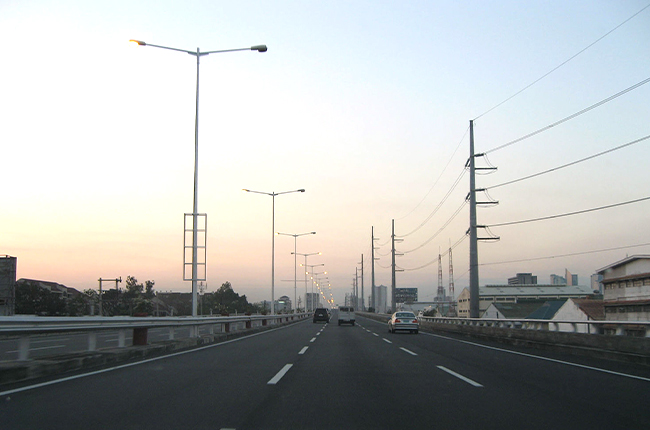 This is the initial stage of the elevated highway that covers a portion of SLEX  stretching from Magallanes all the way to Alabang. Construction originally started back in April 1995, and the thoroughfare partially opened to motorists in October of 1999. Later on, more exits would be added to the roadway stretching all the way to the Makati area and to the Ninoy Aquino International Airport (NAIA) interchange.

After the completion of Stage 1, plans were drawn up to further extend the elevated highway to stretch all the way to the Sucat-Bicutan area. Construction for Stage 2 began in 2019 and by 2010, 52% of the roadway was complete. By December of that same year, the roadway was finished and opened to the public. Skyway Stage 2 was also further extended in 2011 with the addition of the Alabang Toll Plaza, further lengthening the roadway to reach the southernmost business districts. Stage 2 would also be further expanded in 2020 to reach the Susana Heights area, alleviating traffic congestion in the Alabang area of SLEX.

Skyway Stage 3 was another extension project for the roadway that sought to decrease the travel time between the north and south, and to create a more direct route for motorists traveling from NLEX to SLEX. With the new section of roadway open to the public in 2020, it helped reduce traffic along other major thoroughfares in Metro Manila, as motorists now have an alternate route to take when traveling from north to south.

The current Skyway road network starts from the Susana Heights area in the south and extends all the way to the Balintawak area in the north. The elevated route also has multiple entry and exit points along the way to better allow motorists to utilize the expressway. 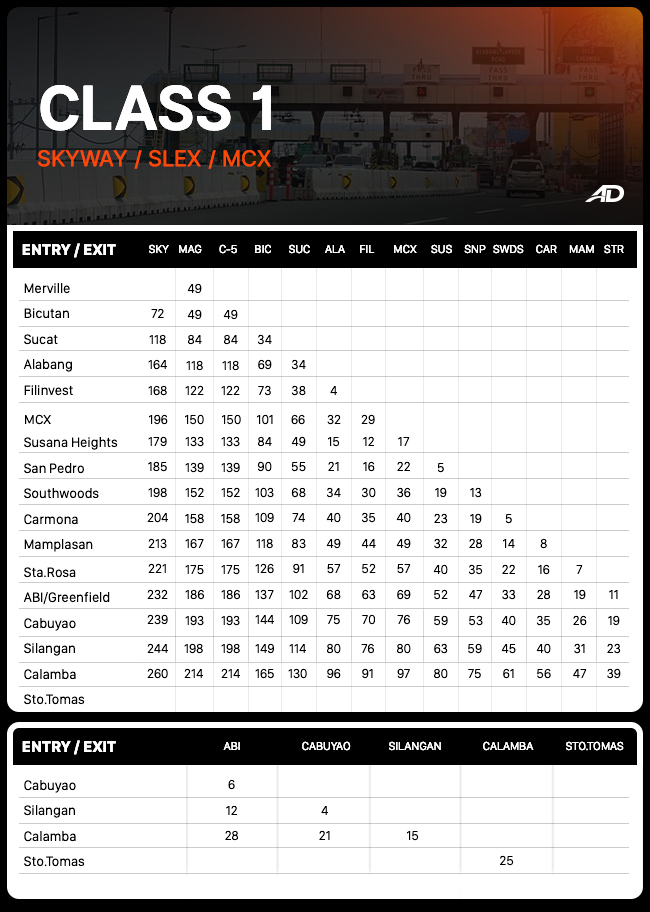 The Skyway generally has a more expensive toll compared with standard thoroughfares like NLEX or SLEX. These are the recently approved toll fees by the Toll Regulatory Board for Skyway Stage 3:

It is important to note that these fees are lower than what was originally proposed by SMC.

The Skyway has various speed limits depending on what part of Skyway you are driving on. From Stage 1 to Stage 2, or Magallanes to Bicutan, the average speed limit is 80 km/h. For Skyway Stage 3, from Balintawak to Makati, the speed limit is 60 km/h.

The Skyway road system isn’t done yet, as more plans have been drawn up to further extend the elevated roadway to reach other areas within Metro Manila. As it currently stands, there are three ongoing projects that are in various stages of development or completion. 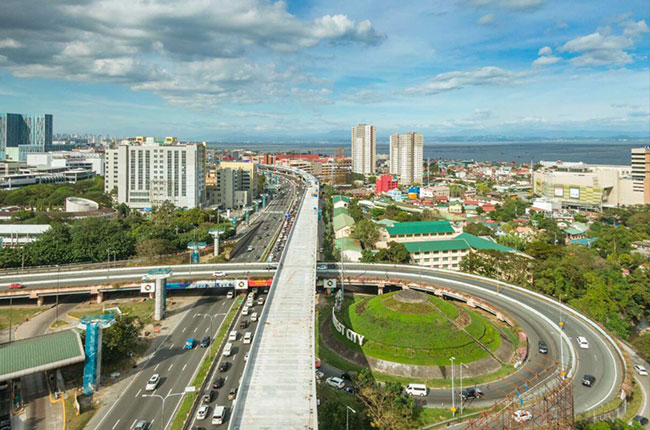 The San Miguel Corporation (SMC) plans to further expand the Skyway network by adding extensions near SLEX. This will further extend the elevated roadway all the way to the Susana Heights area, allowing people living in the southern area to easily access the expressway and reducing traffic congestion in the Alabang area of SLEX.

Another part of the expansion plan for the Skyway is the NLEX connector road. This new segment of elevated highway seeks to connect Skyway to the North Luzon Expressway. The roadway itself is projected to be about 13.24 kilometers long, and will start from Buendia (Skyway Stage 1) and will connect to the C-3 Road. This will create a link to segment 10 of NLEX, giving trucks and other motorists an alternate route to quickly get to the available highways in Luzon. It is also hoped that when this project is completed, traffic buildup will be reduced in the Manila Port area. 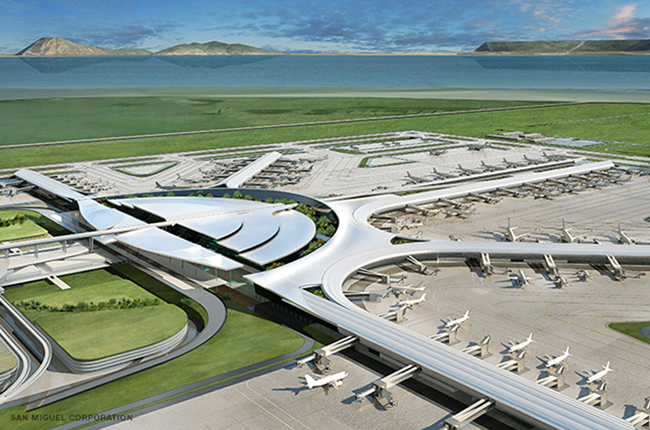 The San Miguel Corporation, together with Metro Pacific Tollways, is in talks to make a new elevated expressway that will connect the New Manila International Airport to NLEX and SLEX. However, nothing yet is set in stone, as further research has to be done between the two companies to ensure that the current roadway system can handle more traffic.