The crossover segment in the Philippines is constantly evolving as more and more manufactures rush to meet the trend and take a claim in the very lucrative market. That being said, the MG ZS was one of the early entries into the segment from MG Philippines that met the initial boom. While it was met with great success, as technology has advanced it now faces stiff competition from newer and more powerful offerings. With that in mind, we tackle the question, is the MG ZS still worth it was given the new entries into the crossover segment? If there is one thing that still gives the MG ZS an advantage over all of its competitors is its competitive pricing. The crossover can be had for under P900,000 for its entry-level variant and at its most expensive for a little shy of P1,000,000. This puts it right in the sweet spot for those looking to get an affordable vehicle that comes feature-packed as well. It’s also an ideal car for those looking to get a crossover that functions well in the city and can even be a family car.

With its competitive price point, it’s no wonder that the vehicle has become so popular in the country. It has even caught the eye of a few local government units as the city of Markina even has a fleet of them being used as police cars. That being said, this crossover is definitely worth considering especially for those who are working on a budget. Aside from its attractive price point the MG ZS also comes with a host of features that make it popular amongst owners and prospective buyers alike. It has an 8-inch infotainment system that comes with Apple CarPlay and even has a dynamic reverse camera that has a distance indicator at the back. This makes the crossover a breeze to park in tight spaces where you need to maximize every inch available. Aside from this, there are plenty of charging points available in the vehicle that can both keep a dashboard camera running and charge your smartphone at the same time. Overall you get a lot of features for what you pay for making it a competitive vehicle in the crossover segment.

Spacious interior for its price 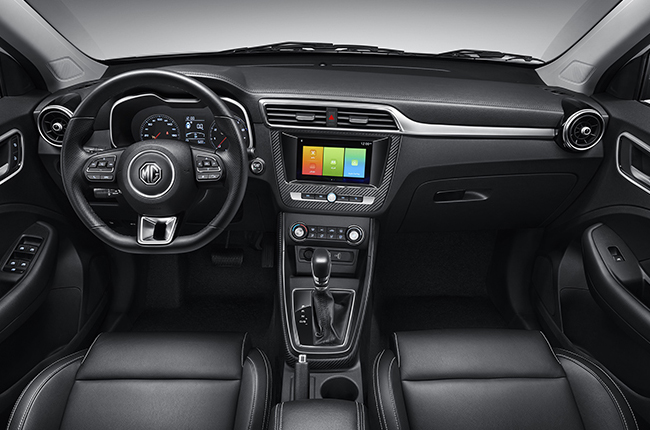 The MG ZS also boasts a spacious interior that is made even more comfortable thanks to the addition of a sunroof that lets natural light into the cabin. The crossover can also easily seat five occupants with enough space for luggage at the back. The seat bolsters are comfortable and aren’t taxing on the body especially on long drives. The air conditioning system is powerful enough to keep everyone cool even with the sunroof. That being said, you get plenty of space for an affordable price with this crossover. Aside from its other more technical and convenience-related features such as its infotainment system, dynamic reverse camera, and its sunroof. The MG ZS also has a tire pressure monitoring system equipped with the crossover. While it might be an often overlooked feature, it can tell you easily tell you when one or more of your tires needs to be filled up with air. It’s a simple tool that comes with big benefits as it eliminates the guesswork needed every time you think you will need to fill up your tires with air. For a vehicle with its affordable price tag, this feature on the MG ZS makes the crossover all the more appealing.

How does it stand out from its competitors? In terms of features, the MG ZS is about on par with its competitors. It comes with all the features and more one might need for their first car or as their secondary vehicle. It has features that aren’t normally available at its price point and has raised the bar for the segment since its arrival in the local market. However, where it lags behind its competitors such as the Geely Coolray and the Ford Territory is when it comes to power. While its 1.5-liter engine still produces a healthy 114 hp and 150 Nm of torque, it still doesn’t beat out its other rivals which are producing well over 140hp and 200 Nm of torque.

That being said, despite its shortcomings in terms of performance, the MG ZS is still a great option to consider especially for those who want a city car that gets the job done. In a rapidly evolving crossover market where new vehicles come in with new features and more attractive value for money propositions, the MG ZS is still able to stand strong as a veteran of the segment. As it was one of the early crossovers to enter the market which quickly gained popularity, it has built a strong fanbase over the years and still carries the value for money that it offered when it initially launched. While it may lack in certain areas against its other rivals, it offers customers a proven formula and one that they can trust for many years to come.

While the brand is still relatively new to the market it has already quickly established itself thanks to the MG ZS and its other brethren in the local lineup. With that said, the MG crossover is still definitely a great choice for those looking to get a crossover that comes feature-packed. It has an affordable price point that many will appreciate especially for those who are working on a tight budget.