Unlike other brands, Nissan was quite late to enter the midsize SUV segment. Despite that, the Terra has already established its rightful place in the competition, with the model still selling like hotcakes during its sophomore year. Truly, it’s better to be late than never. Soon, the midsize SUV will then cross its third year of presence here in the local market.

Just recently, the Philippine market was one of the first countries in the ASEAN region to receive the refreshed Nissan Terra, and we're happy to report that the midsize SUV made a huge step from its predecessor in terms of design and tech. So with all that said, is this SUV really worth it? Let’s find out together, shall we? Its predecessor was not flashy yet it doesn’t offend as well, it looks just right. For the model year 2022, the Nissan Terra just got a major makeover, its clean and boxy dimensions have now been infused with elegance while still retaining its rugged profile. This is all thanks to its more prominent fascia and revised rear end.

It does get some of the brand’s signature design cues such as the larger V-Motion grille and boomerang details applied on the Daytime Running Lights (DRLs), side repeaters, and the taillights. Unlike before, all variants now come standard with a rear spoiler and a set of redesigned 18-inch alloys with 255/60 tires. Overall, its design should age gracefully over time.

One of the most comfortable rides in its class The Nissan Terra is comfortable in several aspects. First up is the spacious cabin, not only does it pack lots of room for passengers up to seven, but it also comes with a flat-folding third-row and second-row seats which allows you to maximize your precious cargo room. One thing worth mentioning though is those NASA-inspired Zero Gravity seats that allow great comfort, be it on short distances or longer journeys. Second is the number of creature comforts it has. Before proceeding with its fancy gadgets and gizmos, all variants of the Terra come standard with the one-touch tumble seats, which also has a convenient button in the front. This gives occupants some much-needed ease and convenience when accessing the rearmost seats. 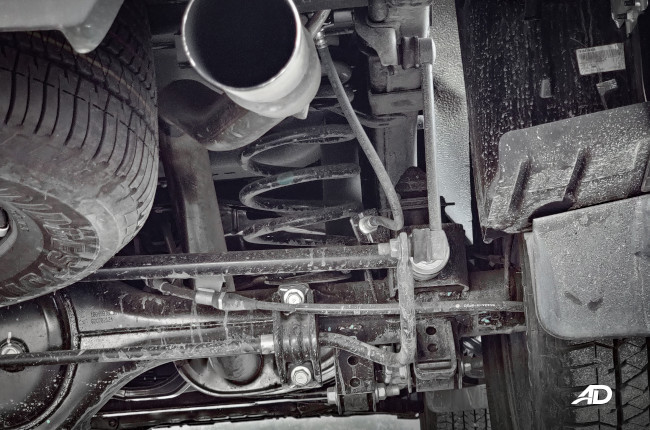 Lastly, one of the main highlights of this SUV has got to be its ride quality which is purely complemented by the rear multi-link coil spring suspension. Therefore, going through uneven terrains or potholes won’t be much of a chore for the Terra. 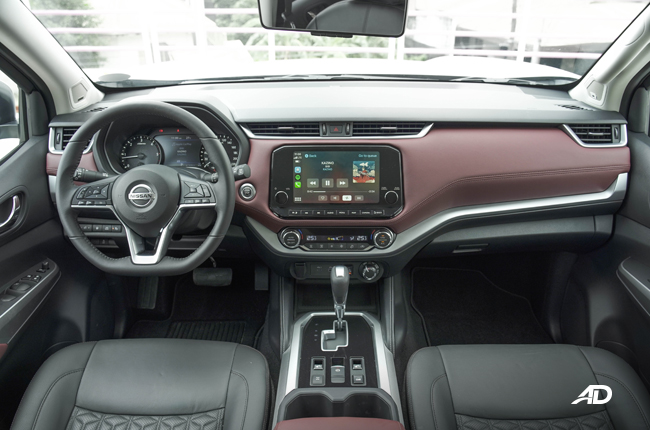 Gone is the plain jane dashboard, as Nissan has treated its refreshed SUV with a more presentable and well-appointed dash layout. Fit and finish are better than before, it even gets a contrasting red leather that's well-integrated on the dash. Come to think of it, the refreshed Nissan Terra now has one of the most good-looking interiors in its segment.

Unlike before, all trims of the refreshed Nissan Terra now come with push-start button along with a smart keyless entry and an advanced driver-assist display, on the other hand, the dual-zone automatic climate control is exclusive on VL variants, while lower trims get dial-type manual air conditioning. Both the 8-inch and 9-inch infotainment systems feature Apple CarPlay and Android Auto along with other multimedia functions.

What's surprising though is that the Terra can now be had with an 8-speaker BOSE sound system, lower variants, on the other hand, still come with the standard 6-speaker audio system. VL trims, on the other hand, come with additional goodies such as a power-adjustable driver’s seat, leather upholstery, automatic climate control, an 11-inch flip-down monitor with HDMI input, and the Around View Monitor (AVM).

It shares the same DNA with the Navara Apart from its aforementioned suspension setup, the Terra also carries several other mechanicals from its pickup sibling, the Navara. This includes the tried and tested 2.5-liter turbo diesel that could either be paired with a 6-speed MT or a 7-speed automatic. The said mill produces a healthy 187 hp and 450 Nm of torque.

Like the Navara, the Terra delivers that utmost performance in the city, highway, or even during unpredictable conditions. More importantly, it does return good fuel economy numbers making your trips to gas stations less often than usual. Back then, many were questioning Nissan Philippines on why they only gave the pre-updated Terra rear drum brakes with the majority of its competitors having disc rotors. Thankfully, aside from its range of exterior and interior upgrades, the refreshed Nissan Terra can now be had with rear disc brakes, though you can only get it on VL variants.

Safety is a priority on this midsize SUV The following features shall help increase driving confidence plus, it should further elevate the safety of both driver and its passengers. Earlier, the new Nissan Terra was praised for having an even holistic package, and we’ve successfully defended that just now. To make it summarized, Nissan’s midsize SUV does deliver in terms of looks, comfort, performance, and safety. So going back to the question, is the Nissan Terra worth it? The answer to that is yes. With its pricing starting at only P1,649,000 and topping up to P2,339,000, you’d definitely be surprised with what this refreshed model has to offer.

While some of its seniors may have been in the market for quite some time now, the Nissan Terra still managed to catch up and collect some genuine love from many buyers. Perhaps, more customers will consider the midsize SUV given its extensive upgrades.