I used to watch different motoring competitions back when I was a child. It was the still illusion of the wheel spokes of a speeding car that amuses me every time I tune in. But as I grew up, it turned out that speed is only 1 factor you need in winning.

Yes, in certain types of motoring competition, being fast is a must but one rally in the country is more than just about speed. Dubbed as the Sunshine Television Auto Rally Corporate Challenge (STV-ARCC), the rally seeks safety and time consistency instead of pure speed, which is observed through its tagline “On Time, All the Time.”

The STV-ARCC was held at the Harbor Point mall at Subic Freeport Zone last May 13. The annual event was joined by different car brands and local distributors with teams composed of media personalities, as well as amateur and veteran motoring icons.

For the uninitiated, the STV-ARCC is a Time-Speed-Distance (TSD) rally consisted of a series of well-placed checkpoints which every team needs to reach in the closest possible time. Each cars are given notebooks with the directions, suggested average speed, and distance per turn. In addition, a team should be composed of 3 persons: the driver, a navigator, and the time-keeper. The STV-ARCC injects a different kind of hype that you can rarely find in other motoring event – being exactly on-time all the time. Of course there was the adrenaline for rushing, but only when running towards each checkpoint. The significant excitement it gave was the continuous effort in sticking to the time, and at the same time not exceeding the speed limit. This requires both alertness and true discipline.

Of note, there were 37 entries from local car manufacturers and distributors in the event, and we were lucky enough to be part of Honda's representatives. The team includes the BR-V, Civic RS Turbo, and the top of the line City VX + Navi. 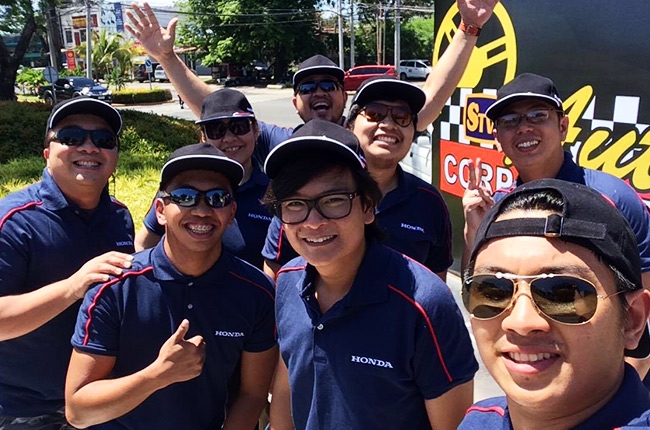 The City was manned by AutoDeal’s Yabee Eusebio (driver) and yours truly (navigator), with the 3rd passenger Jose Cabotaje (time-keeper) from Honda. The rally took us all the way to Bataan, where we marveled the winding uphill roads and thrilling hairpins we had to go through, then back to Subic.

What made the STV-ARCC more exciting was that there were lots of confusing turns and maneuvers. But despite these challenges, we managed to commit only 1 wrong turn – which we think we successfully recovered from, without breaking the law. And no, the STV-ARCC is not a race, and is performed on public roads. This way, drivers will be able to carefully observe safety and proper driving.

As the navigator of the team, I was responsible for notifying the driver on where to turn and how fast we should go, as well as looking carefully for checkpoints. It's such fulfilling for our team to say that we haven't missed a single checkpoint – the most important factor in winning the rally. The drive lasted for 6 adrenaline-pumping hours of tracing the designated route. There are no results yet on what team prevailed as the STV-ARCC awards night is scheduled to happen on May 23, 2017. Winning may be a great fulfillment after participating in the 2017 STV-ARCC, but even if we don’t, we still managed to enjoy the drive and view in awe the sceneries of Subic.

In line with the rally’s tagline of being "On Time, All the Time," we also learned a valuable lesson – that winning by bending the rules is not a worthy victory, but a stink to an athlete’s personality.