Small cars present themselves not only as a great form of transportation for both the city and occasional trips out of town but also as starter vehicles for first-time drivers. These cars come in a compact form factor and are easy to maneuver. While some of these vehicles might come with a back to basics approach, they are still great value for money options especially for those on a budget or who are looking at much older vehicles.

To make it onto the list, the vehicle must qualify as a small city car and must come with a price tag of under P1,000,000. The prices listed below will be for the top-of-the-line models as they are variants that come with all the features available to the vehicle. 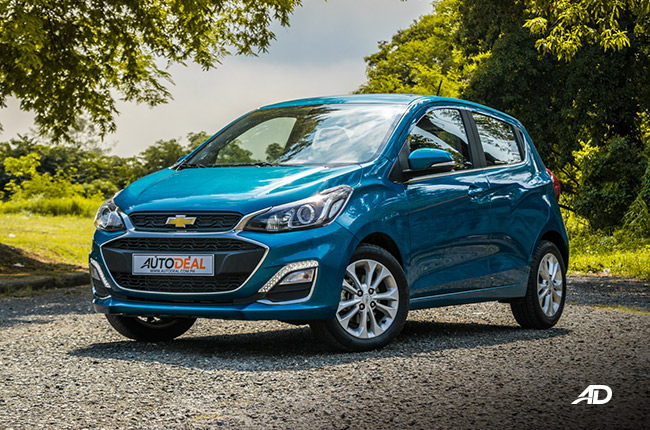 Another veteran to the small car segment is the Chevrolet Spark. Despite being an older model on the list, it still comes with a great number of features that help it keep competitive with the newer models available on the market today. One of its key features is a 7-inch Chevrolet MyLink infotainment system that comes with Apple CarPlay and Android Auto. This makes it one of only two vehicles on the list to have this feature available on the market today.

Aside from its infotainment system. The Spark also comes with one of the larger displacement engines available in its segment. It comes powered by a 1.4-liter naturally aspirated gasoline engine that produces 97 hp and 128 Nm of torque. This also makes it one of the more powerful options in its class. As for its choice of transmissions, it can be had with either a 5-speed manual or a CVT. For fuel efficiency figures the Chevrolet hatchback can do 10.1 km/L in the city and 24.3 km/L on the highway. 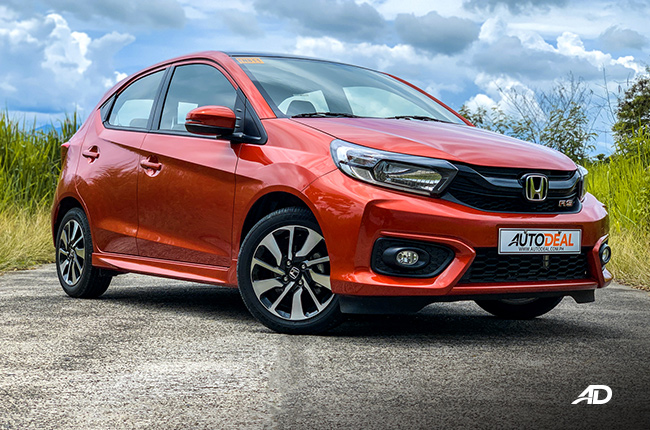 Another small hatchback to make it onto the list is the Honda Brio. The Honda hatchback presents itself as a sportier option available on the market today thanks to its great-handling characteristics. Aside from this, the vehicle also comes well equipped as it has a 7-inch touchscreen for its higher-spec models that comes with Bluetooth and USB connectivity. Further adding to its sporty appeal, the Brio also comes with color-matched interior accents for its RS trim level

Under the hood, the Honda Brio has a 1.2-liter naturally aspirated gasoline engine that produces 89 hp and 110 Nm of torque. This motor is mated to either a 5-speed manual or to a CVT aiding in giving it great fuel efficiency figures. In the city and with the CVT, the Brio can do 8.7 km/L, while on the highway it can do 20.3 km/L. Its city fuel efficiency figures may not be the best on the list, but it more than makes up for it by being one of the more powerful options available in its segment today. 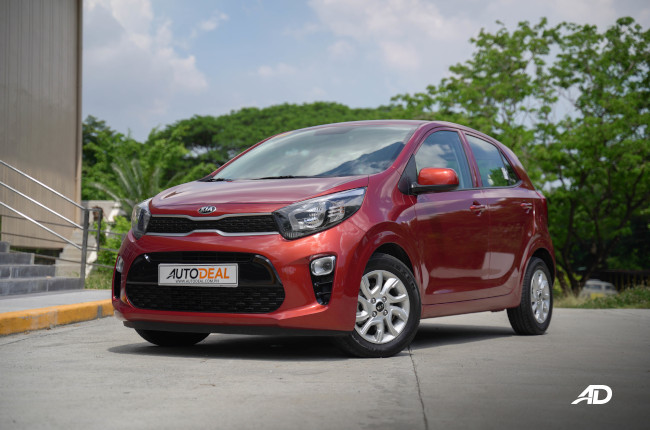 A South Korean entry to make it onto this list is the Kia Picanto. Sold as a global vehicle this small hatchback can be seen in other markets such as in Europe and in the ASEAN region as well. The South Korean hatchback has the distinction of being one of two models that has a 7-inch infotainment system that comes with Apple CarPlay and Android Auto. This feature not only makes it easier to integrate your smartphone with the vehicle but also allows it to utilize your favorite navigation and music streaming applications.

The Picanto also has the distinction of having two engine options available for the small hatchback, it can be had with either a 1.0-liter or a 1.2-liter gasoline engine. The smaller displacement powerplant produces 66 hp 95 Nm of torque, while the bigger 1.2-liter makes 83 hp and 121 Nm of torque. Transmission options between the hatchback’s two variants are either a 5-speed manual or 4-speed automatic transmission. While we don’t have the fuel efficiency numbers for the 1.0-liter model, we do have figures for the 1.2-liter variant. It is able to return 12 km/L in the city and 25 km/L on the highway. This makes the Kia Picanto one of the most fuel-efficient small hatchbacks we have tested thus far for its segment. 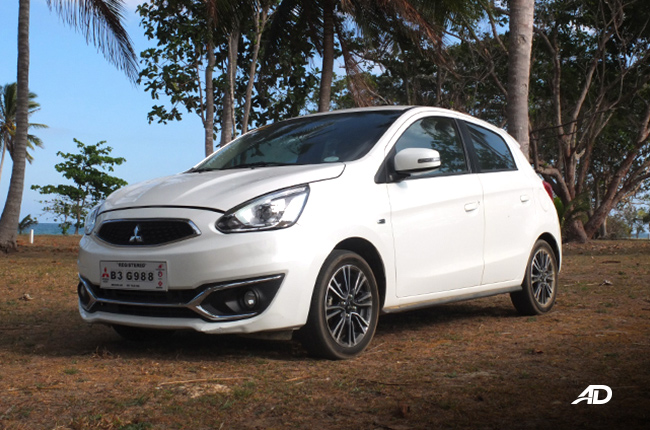 A popular entry onto this list that is also a veteran of the segment is the Mitsubishi Mirage. Originally introduced in 2021, the Mitsubishi hatchback has been steadily getting small upgrades throughout the years. With that in mind, this has kept the vehicle competitive despite an evolving market. It brings to the table a fuel-efficient engine along with a 6.75-inch infotainment system that comes with Bluetooth and USB connectivity.

Under the hood, the Mirage comes powered by a 1.2-liter gasoline engine that many Filipinos have come to love thanks to its fuel efficiency. It produces 77 hp and 100 Nm of torque and can be had with either a 5-speed manual or a CVT. The motor together with the car’s light body can do 12 km/L in the city and 23 km/L on the highway. While its highway figures aren’t the highest in its class, its city figures are the ones to look at as it comes a cut above its competition. That being said, the Mitsubishi Mirage presents itself as an ideal option for those looking to get a fuel-efficient hatchback that also happens to be assembled in the Philippines. If you want a sedan version of the Mirage then the Mitsubishi Mirage G4 is your next vehicle. It comes with the same features as its hatchback counterpart and packs the same engine as well. While its cargo space isn’t as configurable it does come with ample room to store whatever you might need. Similar to its hatchback stablemate it too comes with a 6.75-inch touchscreen infotainment system that has Bluetooth and USB connectivity.

While we don’t have the fuel efficiency figures yet for the sedan, expect it to perform about the same as its hatchback counterpart as they share the same engine and transmission options. The Mirage G4 is ideal for those who want a sedan that comes at an affordable price point and that has a fuel-efficient engine as well. The Suzuki Celerio is a small hatchback that is a veteran of its segment. Originally unveiled in 2014, the hatchback has become a popular choice for those looking to get an affordable yet well-equipped vehicle. It brings to the table a 7-inch touchscreen that comes with Bluetooth and USB connectivity as well as offline navigation capabilities.

Aside from its interior features, under its hood, the Celerio also packs a frugal 1.0-liter naturally aspirated gasoline engine. This is mated to either a 5-speed manual or 4-speed automatic transmission and produces 67 hp and 90 Nm of torque. While it may not seem like a lot on paper it’s more than enough to accelerate the small hatchback to highway speeds and return great fuel efficiency figures. In the city, the small hatchback was able to return 11 km/L while on the highway, it was able to do 24 km/L at an average speed of 90 km/h.

If you want a small city sedan that is both affordable and easy to use, then the Suzuki Dzire fits the bill. The small sedan makes a case for itself as a top choice for car buyers and as an option for those who want to replace their much older vehicles. It comes with a decent amount of features that is paired with a decent amount of features that make it all the more appealing. It also is equipped with a 7-inch touchscreen for its higher-end trims that gives the vehicle Bluetooth and USB connectivity as well as offline navigation.

Similar to the rest of the Suzuki entries on this list, the Dzire comes with a frugal gasoline engine. Unlike its hatchback stablemate the Celerio, it comes with a 1.2-liter powerplant that produces 82 hp and 113 Nm of torque. This motor is mated to either a 5-speed manual or to an automatic gearshift (AGS) transmission, which acts as an automated manual. In city traffic, the sedan is able to return 11 km/L, while on the highway it can do 20.4 km/L at an average speed of 90 km/h. Overall a great budget-oriented vehicle for those who want a back to basics machine with just the right amount of technology. 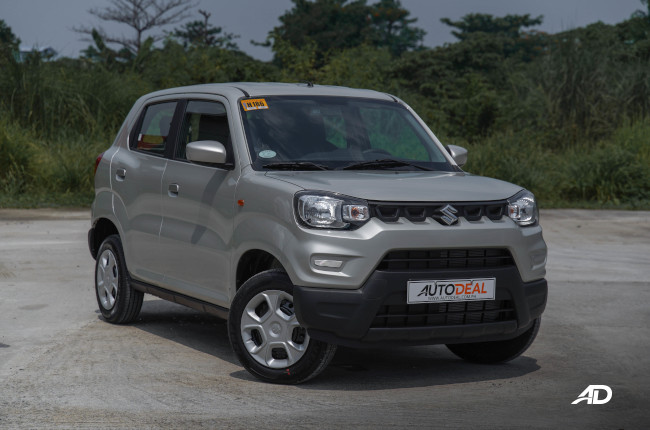 The Suzuki S-Presso is one of the most affordable small hatchbacks you can get on the market today. While it does come with an SUV-like design thanks to its boxy shape and tall hood it’s still a small city car at heart. Despite its sub P550,000 price point, the S-Presso comes well equipped as it has a 7-inch infotainment system that has Bluetooth and USB connectivity. It also has ultrasonic parking sensors found on the rear bumper to help the driver park the compact vehicle.

Powering the S-Presso is a 1.0-liter gasoline engine that is similar to the one found in the Celerio. It produces a healthy 67 hp and 90 Nm of torque, which pairs well with the hatchback thanks to its small size and lightweight. As the Suzuki hatchback is only available in one variant, it can also be had with a manual transmission. Depending on how light your foot is on the accelerator, the hatchback can return 11 km/L in the city and 25 km/L on the highway. If you happen to want a hatchback version of the Dzire that is equally as affordable and is similarly equipped, then look no further than the Suzuki Swift. Much like its sedan counterpart, it comes with the right amount of features that will help you ease the process of your daily commute. It also is equipped with a much larger 8-inch infotainment system as well as easy-to-use automatic climate control dials for its higher trim-level model. Aside from this, the head unit also comes with Bluetooth and USB connectivity and a crisp display that could even rival that of modern smartphones.

The Swift is powered by the same 1.2-liter naturally aspirated gasoline engine found in its Dzire sibling as it still makes 82 hp and 113 Nm of torque. While they may seem similar on paper, where the two differ is when it comes to their transmission options. While a 5-speed manual is also an available option for the Japanese hatchback, it ditches the AGS and gets a CVT instead. Despite the transmission difference the  Swift still returns great fuel efficiency numbers getting 11.5 km/L in the city and 21.5 km/L on the highway. A great option for those who want a slightly shorter vehicle compared to the Dzire and comes with more adaptable cargo space. 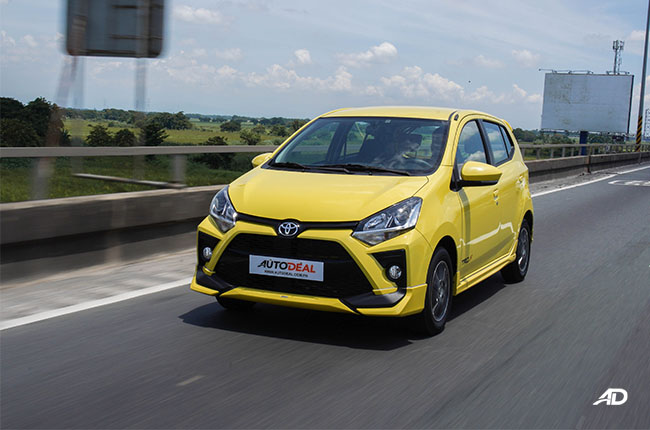 A popular entry onto the list is the Toyota Wigo. It gives prospective buyers compact mobility at an affordable price point along with a great number of features as well. For those who want a sporty-looking vehicle, the TRD S model is available that comes with a 7-inch infotainment system that also doubles as a reverse camera. On top of this, Toyota Philippines has also added other accessories for the top-of-the-line model such as a dashboard camera for an extra level of safety while on the road.

Similar to other entries on the list, the Wigo has a 1.0-liter gasoline engine. It’s not the most powerful option available on the market today but it certainly gets the job done. The motor produces 65 hp and 89 Nm of torque, this can be mated to either a 5-speed manual or to a 4-speed automatic transmission. Despite these older transmission options, the Wigo can still return 10.5 km/L on the highway and 20 km/L on the highway. Thanks to Toyota’s multiple dealerships available nationwide, this small hatchback is ideal for those looking to get their first car or for those who want to get a reliable secondary vehicle for their family.