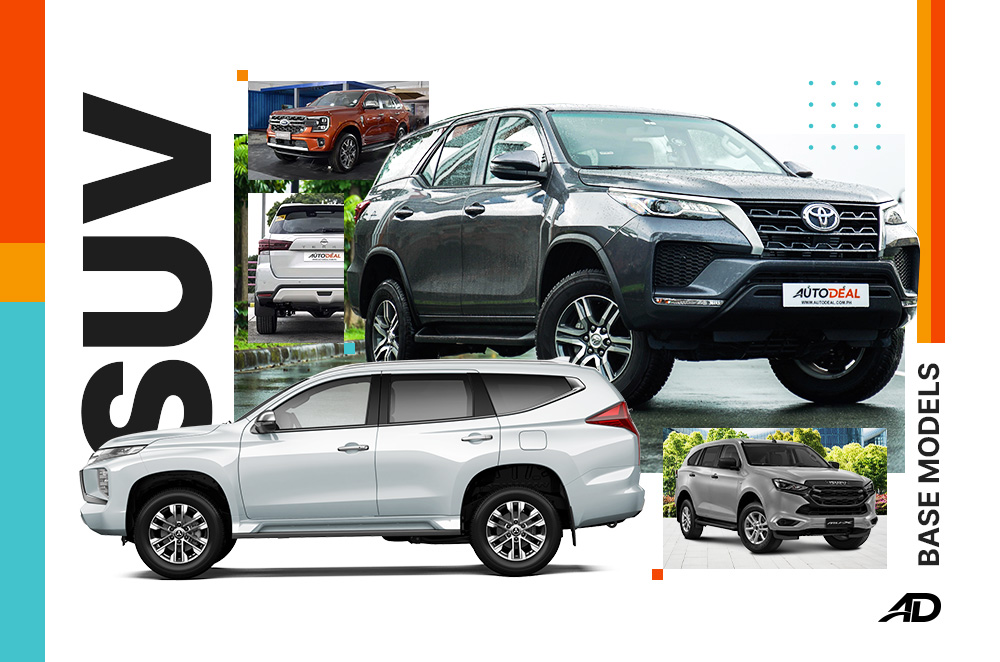 If you want to make the most of your money when you buy an SUV, take a look at this top 5 list. What SUV is the best one for the money? We rifle off five of the best value-for-money base models, arranged in no particular order. 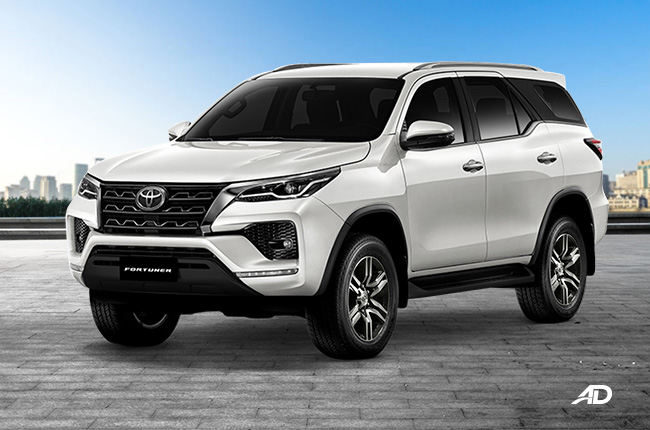 We couldn’t have a list without the Fortuner, but aside from it being a Toyota with a 2.4-liter turbo-diesel motor, it’s not the greatest base model in the industry right now. Back when it was first launched, we got to test the Toyota Fortuner’s G variant, and that was a slight step above the base model with an automatic transmission along with a standard fare of features such as a touchscreen infotainment system, parking sensors, and two airbags. While it is a good baseline, in practice, it’s missing quite a few features that would really catapult it to the top. Considering that the base model is also P1,633,000, it’s a bit of an ask also considering that you don’t get an automatic transmission to work with.

Still, it’s good enough for your daily ride, but it is also somewhat lacking in terms of comfort and space. It might be good in a bubble, but there are certainly better options out in the market. If you really want the Fortuner, we recommend that you get something more expensive in the lineup like the Q variant which has everything that you need and more. 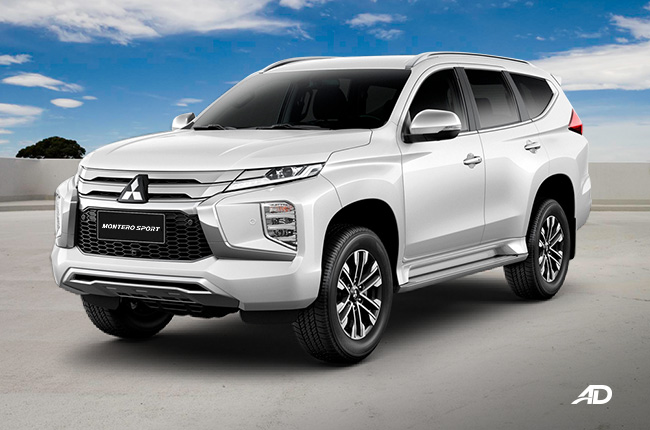 Now here is another contender in the market that we’ve tested and have grown to love over time. Taking a look at the base model, however, we see that it’s not the most adorned, but it’s still a rather impressive value considering that Mitsubishi’s long been one of the leaders in the segment. With a 2.4-liter turbo-diesel motor shared between the base and the top-of-the-line models, you will feel only slight differences between the power and torque deliveries of any trim. Following that, you also get your standard array of features but with the trimmings that can also be found on the mid-range units.

You will still get a rather basic infotainment system, but Mitsubishi makes up for that with a bunch of safety features that prevent unwanted inputs from going through, and that keep the vehicle in control. You also get a manual transmission with the base unit, but the price is the most affordable of the bunch at just P1,568,000. However, we do need to mention that this generation of Montero Sport is getting a little dated compared to the rest of its rivals. As long as you’re okay with that, it should make a good option. 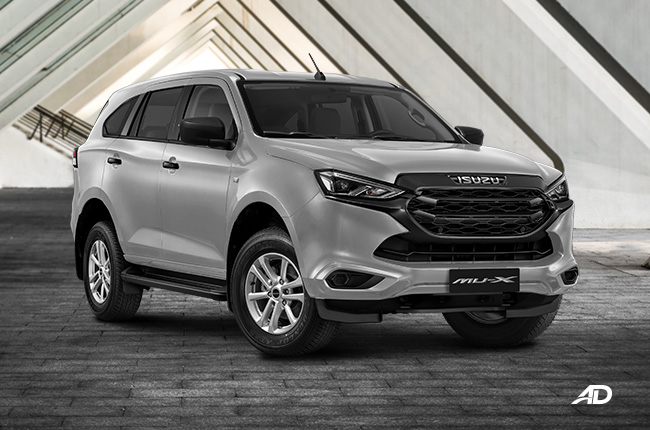 From the bottom of the heap to the near top of the pecking order. The Isuzu mu-X was once thought to be just another workhorse, but following the update, it’s one of the best-looking models out in the market today. The interior of the base model is totally serviceable with a bit of style sprinkled here and there. You get largely the same design that we’ve come to love with the top-spec model, but with less leather and more black-colored panels and surfaces. If you were not a huge fan of the tan-colored leather on the top-spec LS-E trim, then going down a few trim levels could be a better choice for you. On top of that, you still get the 10.1-inch full touchscreen display on board which has everything you need and more. It also has Apple CarPlay and Android Auto for seamless pairing. The infotainment alone is one of the key features that make the mu-X a joy to use, and it’s available at even the lowest trim level.

On top of the exterior updates, the mu-X got a newly-revised engine in its top-spec trim, which is also shared with lower-spec variants. However, if you do opt for the base trim, expect to get a 1.9-liter turbodiesel RZ4E motor which might be underpowered for some, but it’s totally serviceable for most. This is also the most affordable model with an automatic transmission, so if you don’t mind having a down-sized engine and an automatic is a non-negotiable for you, get this one for a low-low price of just P1,590,000 which is only slightly more expensive than the Montero. 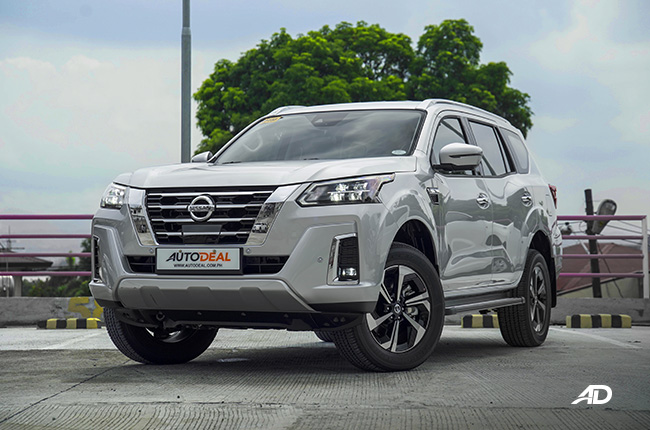 The new-generation Terra is definitely a head-turner. Borrowing some styling cues from the Patrol Royale, Nissan’s midsize SUV is now much classier and more stylish than ever before. The Terra is now a true contender in the segment thanks to its heavily reworked interior which is now SUV class and not pickup class. It’s no secret that the model shares its bones with the Navara, but an interior as well? It’s a good thing that Nissan put in the work to fix that issue.

Apart from that, you also get a top-trim engine in the form of the brand’s 2.5-liter turbodiesel engine that punches 187 hp and 450 Nm of torque. It does only have a manual transmission, but given the torque of the motor, it shouldn’t be too much of an issue. Meanwhile, you still get a great infotainment system in the form of Nissan’s advanced 8-inch touchscreen and you also get a reverse camera. You’re pretty much set for the price of P1,664,000, but that’s quite an ask considering that you still get a manual transmission. 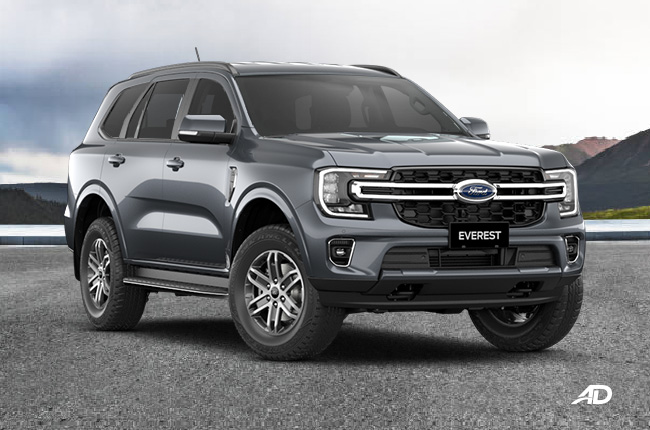 The new Everest brought more F-150-like styling to the T6 platform of Ford. As a well-loved model in the market, the Everest continues its streak of being one of the best-equipped models in the market thanks to its newest update. An automatic transmission is standard across all variants, and what’s more, is that you get a 2.0-liter turbo-diesel engine that can compete with the heavy-weight hitters in the segment. Even if it is down a turbo from its top-of-the-line Bi-Turbo stablemates, it still packs a decent punch with 167 hp and 405 Nm of torque.

The best thing about this model, however, is that it also gets a standard portrait-oriented 10-inch infotainment display and a digital gauge cluster. You also get Apple CarPlay and Android Auto which integrate seamlessly into the model. On top of that, you also get a reverse camera and sensors at the back. Ford’s Everest is known for its interior quality and its space. While it is not the lap of luxury in the base model, it does well. Other brands will give you an interior that looks a lot nicer in leather, but leather-or-not, the Everest looks good even at its base trim level. It is still a bit pricey though, with a starting price of P1,799,000. You have to weigh in heavily to get this model but it does have features that can be found in the mid-trim levels of rivals so essentially, Ford’s giving you a mid-spec trim that serves as the base for everything else.