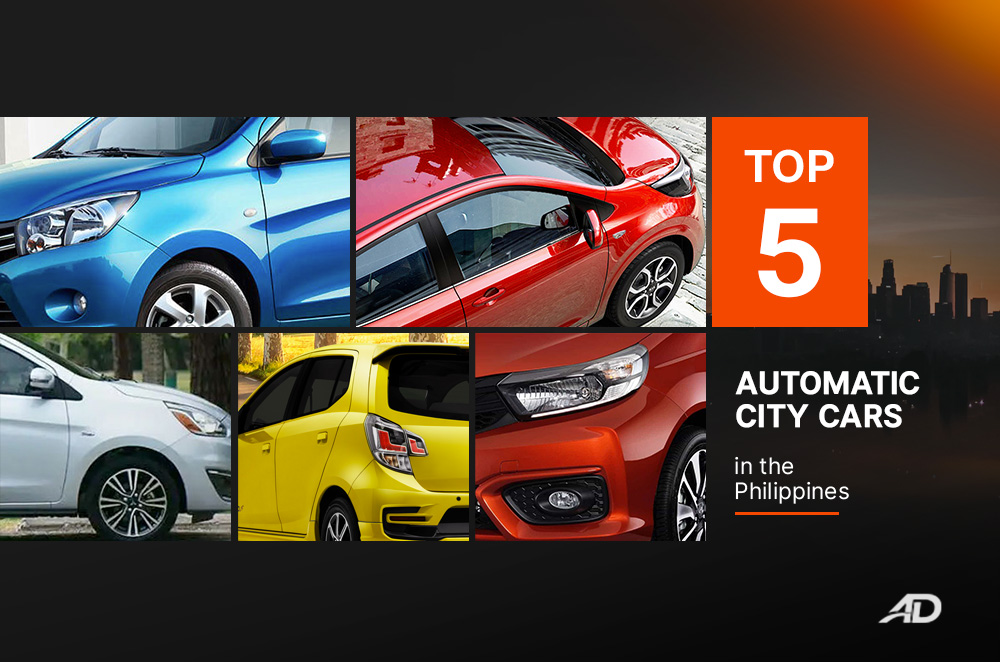 City driving can get a bit tedious. Getting around isn’t the easiest if your car isn’t up to the task of optimally equipped to make the journey. When cars start to pile up and you start to hit stop-and-go traffic, you’re going to wish that you got that automatic transmission or a few more features. While there are a few of us that still prefer a manual transmission, there is no denying that an automatic gearbox will be much easier to operate in the traffic and inclines of the city. The Japanese brand’s smallest offering in the market, the Honda Brio is definitely a head-turner of a city car, plus it has great driving dynamics to boot. With a 1.2-liter 4-cylinder engine that produces 89 hp and 110 Nm of torque. Mated to a CVT, you get a quite responsive drive along with a good amount of fuel savings in the city. Expect fuel economy figures of up to 14 km/L on a good day in terms of fuel consumption for this small hatchback. Also, don’t let its diminutive stance deceive you because this model has good amounts of passenger and cargo space coming in at 258 liters of space with the rear seats up. This can expand to 710 liters once the rear backrests are folded.

Though compared to the rest of the competition on this list, it’s a bit on the anemic side in terms of technology features since it doesn’t have a backup camera and it also doesn't have parking sensors. It also doesn't have ISOFIX tethers, so you might have to resort to other means to attach your child seats to this automobile. Though that doesn’t take away from the fact that it is a great driving car that deserves a second, or even third glance while it is stylishly stuck in traffic, especially in its RS variant which tops out at P735,000. One of the more enduring but newer nameplates in the Mitsubishi lineup for the Philippines, the subcompact whether in its Mirage hatch or Mirage G4 sedan it's still a choice in the Philippine market that could make for a good purchase with the brand’s reputation for reliability, and history with Filipinos. Equipped with a 1.2-liter naturally-aspirated 3-cylinder engine, the gasoline motor produces 77 hp and 100 Nm of torque, which is not a lot, admittedly. If you’re a hatchback lover, then the top of the line Mirage goes for P760,000, while the top of the line G4 costs P869,000.

It won’t be the most-equipped either. The infotainment could use an upgrade, however, given the space and the adequate amounts of ride comfort, the Mirage is a viable option if you need a reliable city car without much fuss. The smallest entry in the Kia lineup is the Kia Picanto, and it also is one of the most refined in its segment. In terms of comfort over bumps and potholes of the Metro, as well as over the less-than-stellar roads of EDSA, the Picanto is one of the more appealing choices out in the market today. Equipped with enough tech to keep you entertained in the cabin. With a 7-inch touchscreen with Android Auto and Apple Carplay, the Picanto is a rather fully-featured car that drives well with its 1.2-liter gasoline engine that gets pretty frugal. You also get the luxury of a backup camera that’ll no doubt help you get in and out of parking spots even if the car is so tiny. The most affordable variant of the Picanto with the 4-speed automatic transmission and 1.0-liter engine is the LX AT variant which goes for P635,000. If you want more power, get the 1.2-liter variant which goes for P745,000, and that is the top of the line model.

However, a few cons that the Picanto has is it’s smaller-than average rear seats, which may be a little cramped for much taller individuals. You’ll also get a bit of a lip in the cargo area which could be a hassle if you are dealing with heavier cargo. Suzuki’s small hatchback, the Suzuki Celerio is ready to take on the rigors of traveling through the city. It’s one of the most compact in the market today, but it doesn’t skimp out on comfort, fuel economy, and basic features. It’s amazingly frugal with its 1.0-liter 3-cylinder engine that puts out 67 hp and 90 Nm of torque. Instead of a 4-speed automatic, the top of the line variant gets a CVT and traditionalists will still get the option for a 5-speed manual transmission. You also get a serviceable amount of space to go with this model as well as the Suzuki name to go with it. The interior is rather simple but it feels like good quality thanks to the good quality plastics that Suzuki likes to use with its models. The most equipped variant of the Suzuki Celerio is priced at P598,000.

It is still, however, not the most technologically advanced model in the list we’ve assembled. You still get a rather dated touchscreen infotainment system, but if you’re not too picky, it will serve you well thanks to the Bluetooth connectivity, which will work for all modern smartphones anyway. A very popular hatch from the lineup, the Toyota Wigo is one of the best options for consumers on the lookout for a fuel-efficient and cost-effective city car from the number 1 brand in the Philippines. It has a good amount of features that are adapted to today like its 7-inch touchscreen infotainment screen with a backup camera and Apple Carplay and Android Auto integration. Another amazing trait of the Wigo is its vast amounts of space. Even if it is a city car, it does have a lot of leg and headroom in the rear which makes it one of the best models in the segment. Equipped with a 1.0-liter 3-cylinder engine, the model gets good fuel economy in the city even if it does have an older 4-speed transmission. In our testing, we were able to get 10.5 km/L in the city with a bit of traffic. To top it all off, the price of the Wigo is quite accessible to many, with the range-topper topping out at P700,000 flat for the TRD-S variant.

Though, lets look at the cons of this car. While it may come from a trustworthy and reliable brand with a good track record for durability, the interior certainly isn’t the most attractive. Like the brand’s reputation, its more simple and durable than plush and luxurious, the Wigo may not be the premium pick of the bunch, but in terms of getting you where you need to go reliably, it does that to the letter. While this is a small hatchback by classification, it’s actually closer to a crossover, but with all the good qualities of a city car. There is more ground clearance on the Suzuki S-Presso, but you don’t get the added heft and bulk of a higher-riding crossover. It’s still light to pilot, and thanks to Suzuki’s styling, you will get a quirky look to go along with it. Sharing the same bones as the Celerio, it has distinct styling that sets you apart from the more “normal” cars out on the road. On top of that, and thanks to the 1.0-liter engine, you can expect peppy performance and great fuel economy. As tested we were able to get 11 km/L in the heat of city traffic, and amazingly, 19 km/L once things cleared up.

The only thing that is keeping this model from actually placing on the list the fact that it is only available in a 5-speed manual transmission at the time of this article’s writing. The reality is, in the city, an automatic transmission will be infinitely easier to drive compared to a stick shift. That being said, it’s still a great car especially for its price of just P518,000. Imagine, however, if Suzuki outfitted this with a CVT, just like the Celerio. We can only wish.