Geely is probably one of the most consistent brands when it comes to interior quality and overall driving fun. No matter what model you get, you’re assured of a great drive and ride, as well as an interior that can rival even some of the more premium brands out in the market.

However, do the actual owners of Geely vehicles have something else to say? After a few months of use, do the vehicles fall apart? Does the magic wear off? We have just the feature for that. Certified buyers are welcome to revisit AutoDeal and pen in their long-term reviews of their vehicles. Here are just some of the reviews that we’ve gathered from our database with some useful input and opinions from some of our verified buyers. Note that we’ve picked three reviews from the many that we’ve gathered from customers. There are more to check out, so do visit that section of AutoDeal.com.ph. 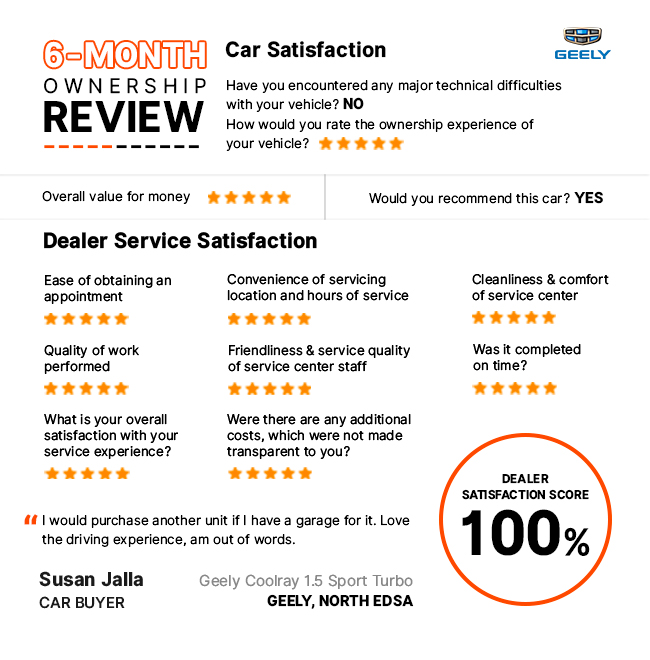 Here’s a customer that was floored the moment that he was prompted to write a review. Now, while a few of us at the office encounter writer’s block, it’s not usually because a car is so great. Ms. Susan Jalla purchased a Geely Coolray back in December and reviewed it after a month. Her review states that “[she] is out of words” to comment about her purchase. Note that she didn’t mean this in a bad way since she loved the driving experience, and would even purchase another unit if she had the space! As with all Coolray owners, the model seems to inspire a lot of emotions thanks to its world-class design and also its high price-to-performance ratio. 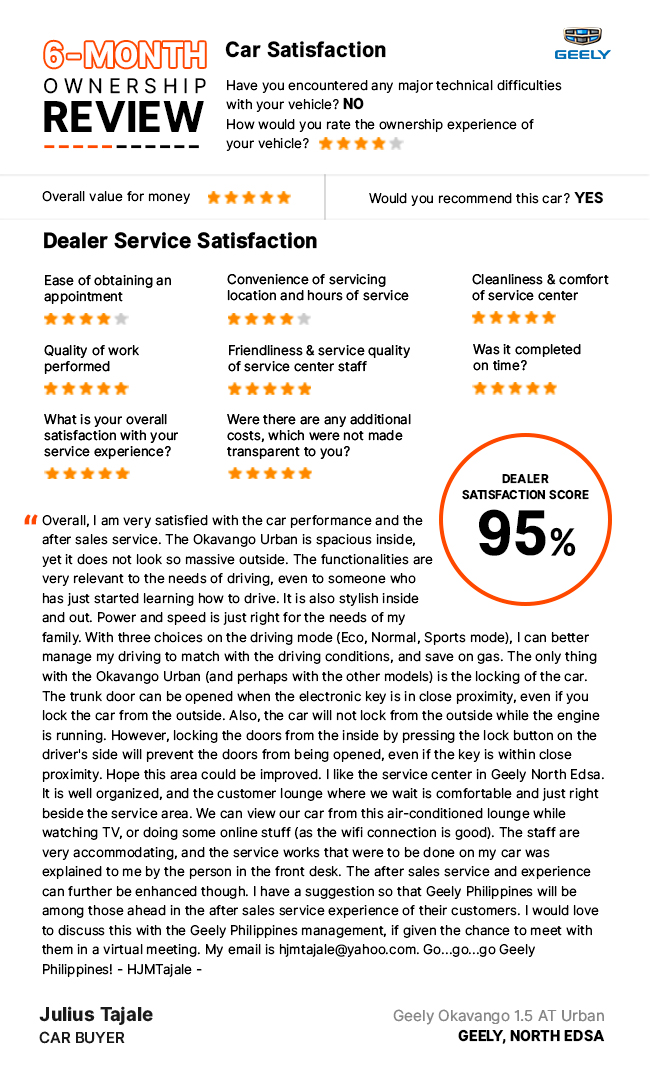 Conversely, Mr. Julius Tajale purchased the seven-seat Geely Okavango and reviewed it after six months. It’s good to see that Mr. Tajale made good with his six months with the car, and submitted a very well-written and lengthy review for us and for other consumers to read. His review states that he is overall very satisfied with the car and even the aftersales service that Sojitz G Auto provides him. Spacious on the inside, but easy and compact to drive outside, the Okavango was just the right fit for him giving him adequate power and performance for him and his family. He points out a few quirks that are standard throughout the industry, but could be looked at by the manufacturers, and can be a use case with regard to smart key technology in the future. He goes on about his service experience with Geely North Edsa, the pilot and first dealership of Geely Philippines after it was acquired by Sojitz G Auto Philippines. Even then, Mr. Tajale was inspired enough to even make suggestions to Geely Philippines and called them out on our site for a virtual meeting. Safe to say, Geely has a true fan. 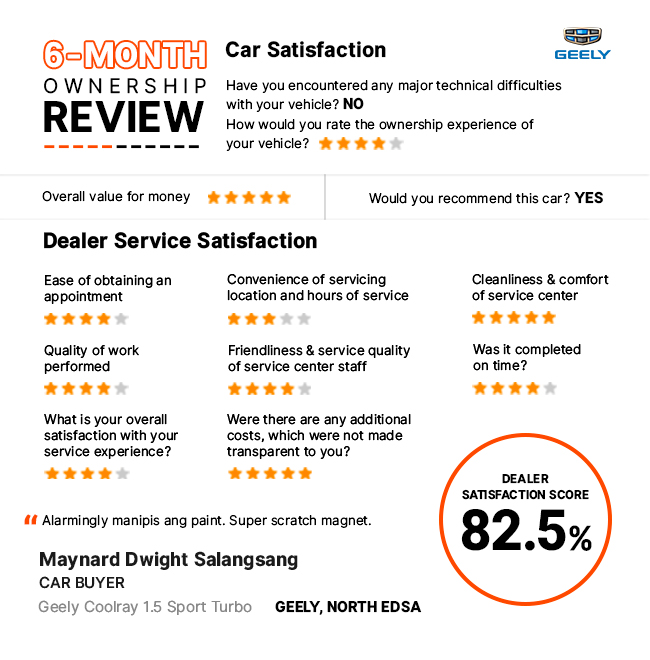 On the flip side, there is one comment that caught our attention on the site, and that is the review published by Mr. Maynard Dwight Salangsang. Having purchased a Geely Coolray and driven it for about six months, Mr. Salangsang stated that the paint was “alarmingly thin” and that it was a “super scratch magnet.” While we’d love to purchase a micrometer for use in the office, thin paint is something that will irk you on the highway with regard to stone chips. Regardless of whether the paint is thin or not, it’s important to take care of your vehicles by using the appropriate washing methods that involve microfiber cloths, car shampoo, and also wax to make sure that no debris produces scratches.

Aside from that concern, it seems that the other customers are quite satisfied with their vehicles and the lowest rating that any Geely received is four stars. Other reviews pin it at about five stars, for all models.