For those who didn’t know, kilometer markers are the upright cement poles (usually yellow) at the side of the road that have numbers and letters written on them. We often see them in the provinces, specifically on national roads—also known as the Pan Philippine Highway—that stretches across the Philippines.

As mentioned, kilometer markers have numbers and letters on them but what do they really mean? Is there some kind of formula that go with these numbers? Will those numbers win me the lottery?

Related: No SUV, no problem: 5 summer destinations near Metro Manila

Most of us didn’t know the practical use of kilometer markers. In fact, these markers can be used for navigation, especially when your gadget with GPS runs out of batteries or you’re struggling to get a good signal.

To further explain the use of kilometer markers, consider this infographic below, based on the example we found in a municipality in Bulacan: 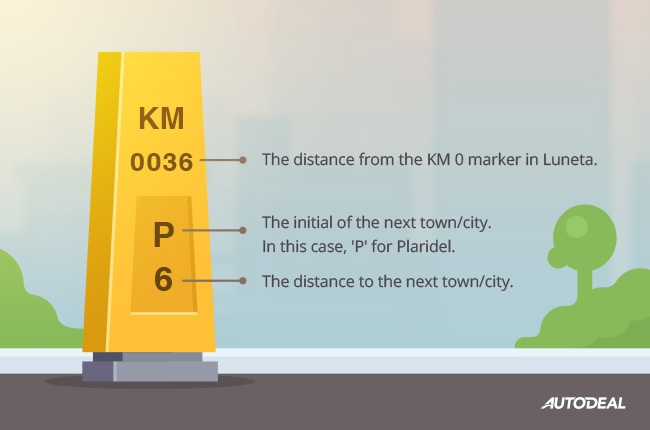 KM (sometimes just K) stands for kilometer, while the number below is your current driving distance from the Kilometer Zero—or simply KM 0—located across Luneta in Manila. Basically, this will tell you how far you are from the nation’s capital. In our example, we’re 36 kilometers away from Luneta.

Below it is the initial of the next town or city, while the number tells you how far you are from it. In this case, ‘P’ stands for Plaridel, which is 6 kilometers away.

Moreover, if the kilometer marker is on the right side of the road, that means you’re driving away from Manila. If it’s on the left, then you’re heading towards the capital.

This system works across the Philippines and you can thank the Pan Philippine Highway for that. This long stretch of road allows you to drive all the way from Pagudpud in Ilocos Norte down to the bottom tip of Mindanao. Before it has been completed, there were separate kilometer zeros for each major islands in the country (e.g. Marawi City in Mindanao).

So, next time your GPS device runs out of batteries and you’re lost, don’t fret. Kilometer markers may look primitive and out-of-date but when the time comes, they can be pretty useful.