The Nissan Terra is one of the Japanese automaker’s popular models in the country. Nissan Philippines initially brought it in to go toe to toe against its other SUV counterparts and since then it has become a go-to for many SUV buyers in the country thanks to its feature set and the power it brings to the table. Now, while Terra looks under showroom lights and in videos, its a completely different when it's out and about in the real world where it gets used as intended being a daily driver.

With that in mind, we take a quick look at what current owners of the vehicle think about their car based on their user-submitted data. This will cover their experiences with the initial purchase of their vehicle to the 6-months later to get a good perspective about after a few kilometers have been put on their cars.

First up we have a review from John Diocares who says that the reviews from Autodeal helped him decide which SUV to buy. While he ultimately chose the Nissan Terra he further states that it is his dream car and even gives it 4 thumbs up. It appears that Mr. Diocares really loves his Terran as he gave it 5 stars and had a great buying experience with Autodeal. If you want similar experience, we highly recommend using our website as we can connect you with multiple Nissan dealerships across the country to help you get the best deal. 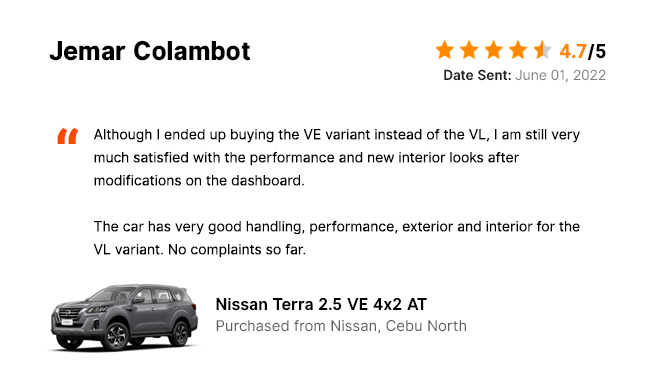 Here is another owner review from Jemar Colambot who initially wanted a Nissan Terra VL but chose a VE model instead. While this variant may not come with all the bells and whistles, Mr Colambot says he is very much satisfied with the performance of the SUV along with its new updated interior. He further states that he has no complaints so far with the vehicle. He gave it 4.7 out of 5 stars

Next, we have a review from Eztephen Bacuno who says it simply, it was his best buyer of the year. It appears that Mr. Bacuno really loves his Terra as it's 5 stars all around for his rating of the vehicle. 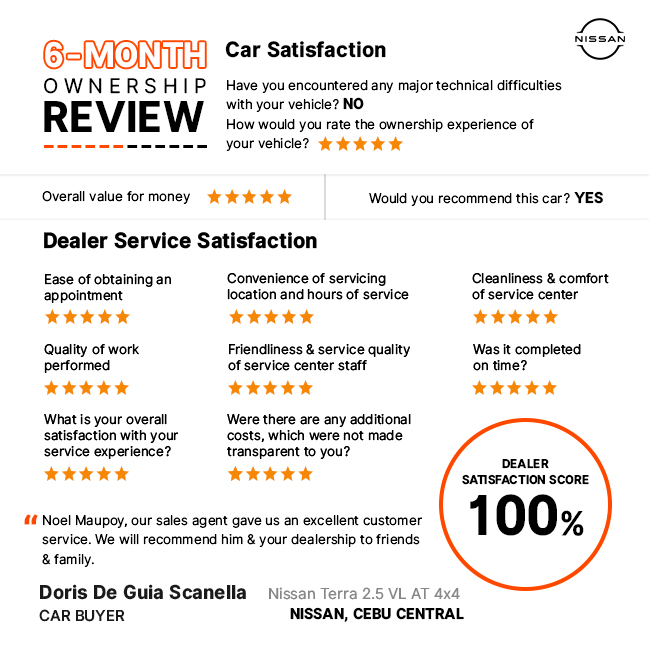 It's five stars all around for this buyer of the Nissan Terran as they thoroughly enjoyed their buying experience with the vehicle. So much so that they would like to highly recommend their sales agent Mr. Noel Maupoy for his excellent customer service. It appears that even on the customer service side Nissan has it down pat. 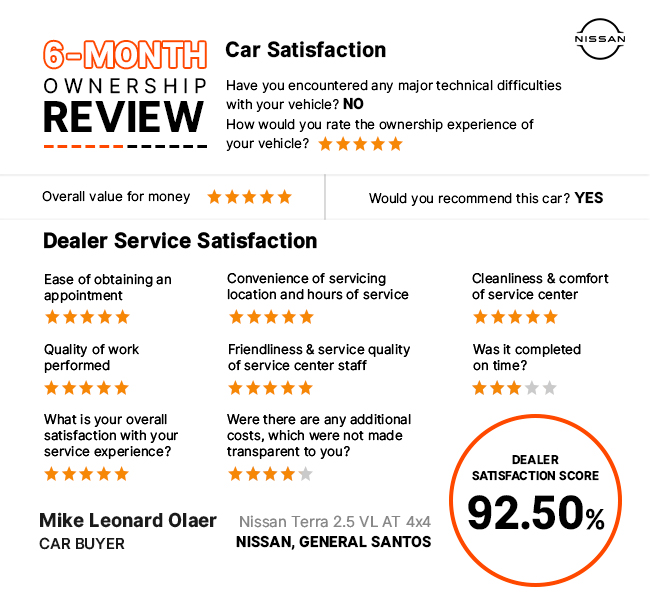 While this review doesn’t have any additional comments to say about the Nissan Terran and their buying experience after a six-month period, it appears that they are still satisfied with it as they have given it a 92.5% rating. It would have gotten a higher rating if the sale was completed a bit faster and if all of the costs were explained properly. Another owner review of few or in this case no additional comments, but it's five stars all around for this customer who bought a Nissan Terra EL back in 2021. This goes to show that even as a base variant, the Terra has a lot going for it and it's no wonder why the SUV is a great one to buy.

With so many good ratings for the Nissan Terra, it's not hard to believe how it became a solid pick for those looking to get a feature-packed and competitive 7-seater SUV. It ticks many of the right boxes for a lot of buyers and comes with advanced technology that makes the vehicle even easier to drive. That being said, we highly recommend visiting our website to keep updated with the latest deals, promos, and discounts available for all Nissan vehicles in the Philippines. Connecting with us will make your buying experience easier and go as smoothly as possible.