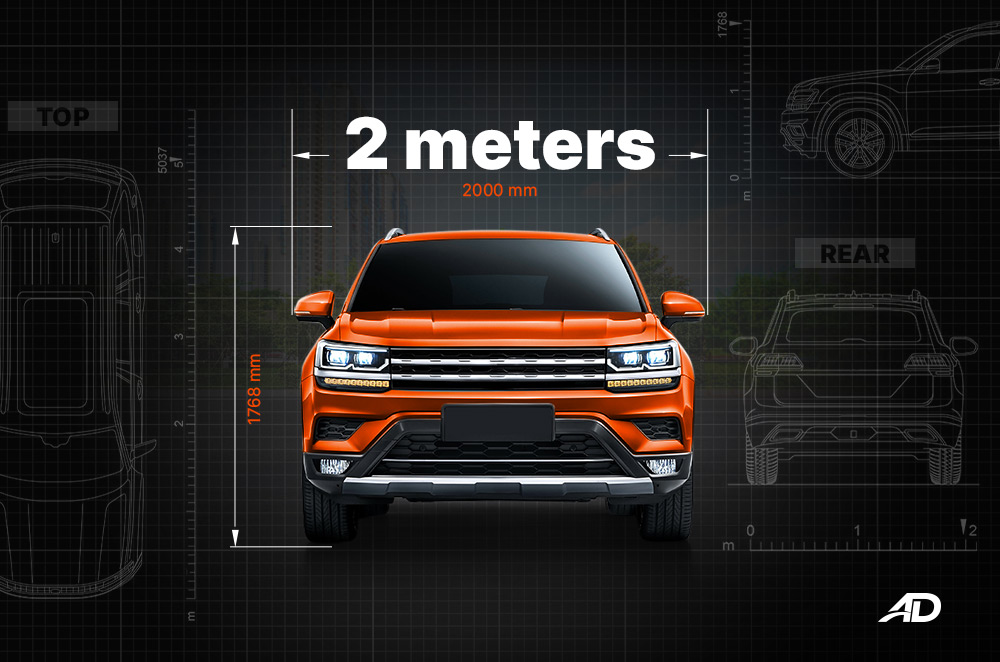 Why don’t passenger vehicles get any wider than 2,000mm? Well, for most cars anyway. While you may have quite a few outliers as is the case with commercial vehicles and even the Hummer H1, which stands at 2,197mm wide, there is more to it than just sheer size alone.

It all boils down to where these vehicles will get access. Quite a few international laws keep car sizes in check. There are quite a few reasons why most vehicles don’t go past certain dimension limits, and here are some if not most of them.

There are certain roads in the Philippines and in other countries that do not allow wide vehicles or large vehicles. Simply put, there are roads that just won’t be able to take the width of an extremely wide vehicle like long-haul trucks or busses.

Most passenger cars and middle-sized commercial vehicles come in at a width of under 2,500mm or 2.5 meters. In Europe, there are quite a few roads that impose mass and size restrictions such as in New South Wales, whose 2012 revision of their vehicle standards information form grant general access to vehicles under 2.5 meters and width.

Also according to the California Vehicle Code (CVC), the general rule states:

(b) the width measurement of any vehicle with sidewalls shall be made from the outside wall of the two opposite sides of the vehicle.

35100. (c) a city or country may prohibit a width in excess of 96 inches upon highways under its jurisdiction.

35105. Any city organized under a freeholders’ charter may permit a width in excess of these limits when used within the city.

There are also other exceptions such as vehicles with certain cargo or attachments. However, the code still states that a 130-inch width is the hard limit given that there is a cotton module mover.

In the Philippines, however, highway access doesn’t put a limit to width but does classify vehicles in terms of height. Passenger cars that stand under 7 feet tall will be classified under the Class 1 status and will be charged as such.

How wide are lanes and parking spaces?

Consider this, if you have to design a parking lot, but you have to maximize the area and the number of slots. On top of that, you have to make sure that each slot will be easily accessible for most people to park in. If you design things too wide, then you give up those extra slots.

Conversely, it’ll be quite hard to get into a slot with a vehicle that is extra wide. Forget simply getting into a slot, how are you going to get out of the car? What if someone parks too close to you? There is a reason why some cars rarely exceed the 2,000mm mark when it comes to width, and if they do, it’s a bit of a hassle.

On top of that, you don’t want your vehicle to eat up two slots or two lanes while it is going down the road. Plus, how are you going to fit considering that some lanes dip down to about 3,000mm in width or less? Wide roads won’t be a problem for most large cars like on the highway, which can see a width of about 3.7 meters in the United States,

So it’s about regulations and usability?

Lastly, we need to cover what is on the manufacturer’s side. While commercial vehicles can afford to be larger than they need to be, you also have to consider that manufacturers have to fork out a lot of money to develop a vehicle that is extremely large, and that may simply be unusable given laws and regulations set in place for many countries.

On top of that, you will run into issues with fuel efficiency as a heavier chassis will undoubtedly require a bigger engine to power. On top of that, you might need some massive tires as well and maintenance costs could go through the roof. Not to mention, where are you going to store the vehicle?

It’s simply impractical to have something that is too big. Midsize SUVs and Full-Size SUVs like the Toyota Fortuner and Land Cruiser respectively, are both somewhat of a handful to pilot already given the crowded streets and limited space in the city. On the highway, you can drive all day, but hitting traffic will also result in some unnecessary hassle.

In short, multiple factors play into a car’s size and the limitations that are seemingly imposed. It’ll boil down to a bunch of different factors like lane width and city planning, as well as your capabilities. Also, the bigger the car, the higher the skill level, and that’s a lot of paint to scratch up.