Your car’s interior is dirtier than you might think. While this news may surprise you especially during these cleanliness-focused times, there are roughly 700 different strains of bacteria already present and living in your car’s interior. This data comes from a study done by CarRentals.com, which surveyed 1,000 drivers in the U.S. The study aims to learn how often car owners clean the inside of their vehicles.

The inside of your car is where you will spend most of your time, especially while on the road. To some extent, you may even eat in it leaving a few bits of food here and there inside your vehicle. There even are instances when passengers, especially kids, take a leak using a wee-bottle during the trip. While these activities may sound normal, such actions could and would result in rapid bacteria build-up in your car—yikes! Unfortunately, we have been exposing our immune system to these harmful foreign bodies without even knowing it. According to CarRentals’ research, only 32 percent of the 1,000 subjects clean their interiors—rarely. These subjects claim that they sanitize the cabin of their car once a year. Even worse, 12 percent responded that they’ve never cleaned their interiors.

What causes the bacteria to build up? Among the various causes of germs in cars, food ranks as one of the most likely catalysts. That crumbs of potato chip you’ve bitten and cracked to pieces over a week ago, the coffee your partner spilled on the seat, and even the drips of ketchup are what breed the bacteria in your car’s interior – developing to a colony after just a matter of days. Well, we couldn’t help but wonder, “what more after weeks; months; or even a year?” Not only does eating inside your car distract drivers, but it also helps in spreading the bacteria.

What does the data show? To understand how filthy car interiors are, the group of researchers measured the surface area by square centimeter sections or by colony-forming units (CFU). The results were then compared to public surfaces that are mostly touched daily. Get this, the average steering wheel has 629 CFU per square centimeter—dirtier than some of the most often touched surfaces.

Surprisingly, it's filthier than the average cell phone screen (100 CFU), public elevator buttons (313 CFU), and even the average public toilet seat cover in America (172 CFU). Seems like you won’t be seeing your steering wheel the same way as before after learning this, will you?

What are the bacteria hot spots? 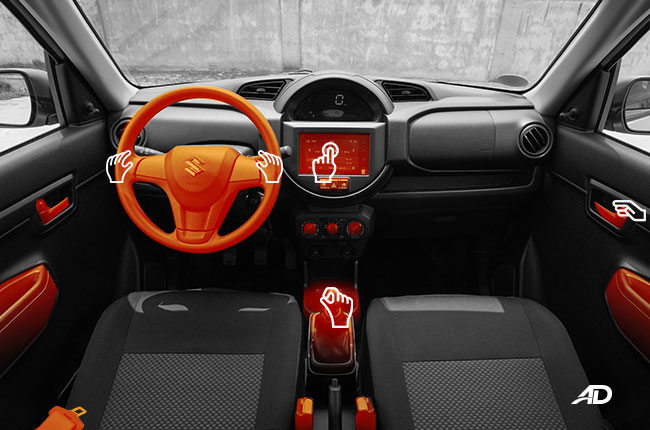 If you want to make sure that your car’s interior is clean, make sure that you make a pass at these key locations in your cabin. The most contaminated part is none other than the steering wheel, where the driver’s hands rest 100 percent of the time while driving. Running second are the cup holders with 506 CFU, while seatbelts catch up with 403 CFU. Areas with a mild infestation include the inside door handle, gear shifter, and audio control dials.

How to make sure your car is clean While there are a lot of bacteria present in your vehicle there is a way to keep them at bay and retain a relatively clean interior. You can follow these steps to help ensure that your vehicle is clean so that you don’t expose yourself to possible illnesses caused by various types of bacteria that are living inside your car. It is important to remember that cleaning your cabin regularly may sound like a tough job especially if you don’t have the time or space to do it but it will be your first line of defense against getting exposed to harmful germs.