The all-new 2021 MG 5 has been officially unveiled in China ahead of its supposed debut at the 2020 Beijing Auto show. It now comes with revised styling that includes a bigger grille, a new set of lights, and new dimensions to match. The all-new sedan measures in at 4675mm in length, 1842mm, in width, and 1482 in height, and comes with a wheelbase of 2680mm. 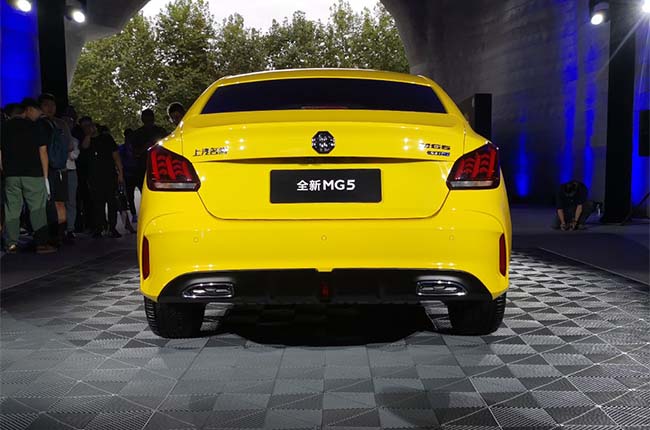 On the outside, the new MG 5 is a far cry from its current iteration. It now comes with a sloping nose that is further accented by sharp new LED headlights. The nose of the vehicle tapers off into a large open mouth grille that now features that brand’s largest-ever MG badge. It also now comes with new silver accents on either side of the large grille paired with a much subtler air intake at the bottom.

Moving to the side and the vehicle gets a new profile as it now comes with a much more evident sloping roofline. While its bright yellow paint job hides its accent lines well, some details can still be seen. It does have a couple of creases to keep the site lively, however, these are relatively muted. Soft curves seem to be the theme for this iteration of the MG 5.

At the back, the MG 5 gets a European-themed rear with a new set of LED taillights. It also comes with a new trunk integrated ducktail spoiler as well as a new set of diffusers and reflectors. Unlike the front, the rear is more sculpted with a few more accents to give it an athletic look. One key styling to point out is that the new sedan does come with what appears to be fake exhaust tips at the rear. While this may turn some people off it does add to the overall aesthetics of the vehicle. Photos of the interior are sparse, however, it seems MG has gone for a sportier feel to match the new looks. It comes with a new digital gauge cluster display along with a new infotainment system to boot. Aside from this, not much else is known about what the vehicle will have in the way of creature comforts and new features.

The 2021 MG 5 will be making its public debut at the Beijing Auto Show starting September 26, and will officially be launched in the Chinese market later in the year. While the vehicle is still fairly new we hope that it will make its way into the Philippine market by at least 2021.

Get Notified About MG 5 News