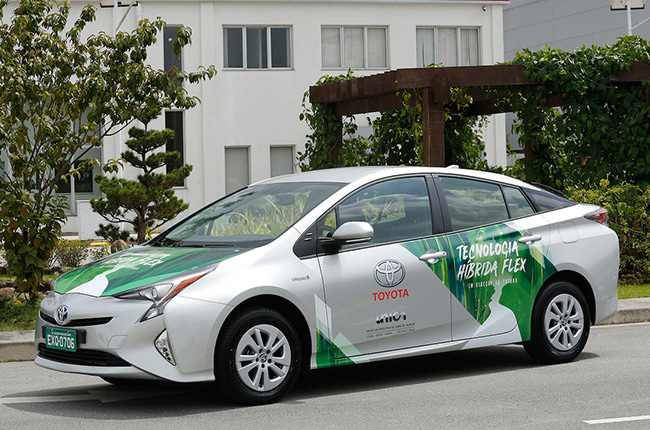 With today's load of sophisticated innovations, you don't know what to call your car anymore. There are those which are fully-electric, there are powered by fuel cell, and there's what you call a hybrid – all on top of the regular, traditional internal combustion-relying vehicle.

So, what's a flexible fuel hybrid, and how does it differ from a regular hybrid system? Simple, it's basically a product of mating Toyota's hybrid system and the flexible-fuel technology. Still vague? You can say an engine is hybrid when it has a combustion engine and an electric motor united under the hood. Meanwhile, the flexible-fuel mill can be powered, not only by gasoline, but alternative fuels such as ethanol.

This prototype by Toyota engineers in Brazil is part of the brand's Environmental Challenge 2050 vision that was established in 2015. Prior product of this green vision was the biosynthetic engine hose introduced in 2016. It's a hose that's made of an unusual rubber called 'biohydrin' that’s claimed to help in reducing CO2 emission.

Going back, the Hybrid FFV is foreseen to popularize hybrid vehicles in Brazil, which in a long-term basis, would help reduce the country's harmful emission. With the integration of flexible-fuel technology, the system would use ethanol, which is a plant-derived fuel and is 100% renewable. It is also known for absorbing CO2 gas, reassuring lesser emission if fused with a hybrid system.

To demonstrate the prototype, Toyota uses the Prius as the base body. According to the company, the Prius is earning quite a reputation in Brazil. Don't ask us about the other parts of the world, though.

“I am very proud of our Toyota do Brasil engineers that worked closely with our engineers in Japan to develop the world’s cleanest hybrid vehicle that uses ethanol for our Brazilian customers. The invention demonstrates our journey in providing a new mobility society.”
Steve St. Angelo
Toyota Latin America Region and Caribbean CEO, Toyota Motor Corporation Senior managing officer, Toyota do Brasil Chairman

Toyota will be gathering data through actual road tests in Brazil. This will help the company to evaluate the system's reliability, durability, and powertrain performance. In addition, the game face is on for the Japanese company, as it aims to attain 5.5 million electrified vehicles globally in 2030. Ganbatte kudasai, Toyota!