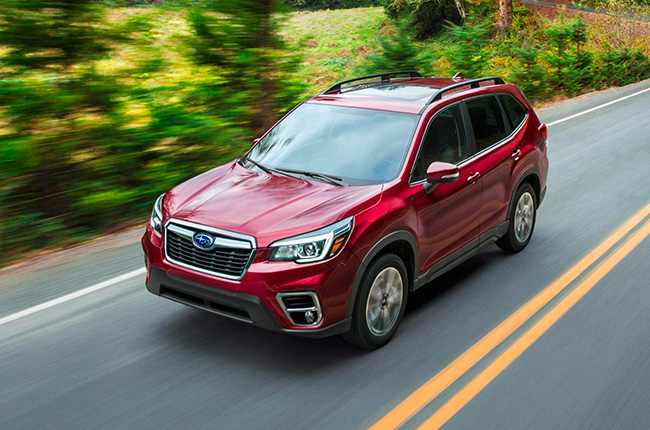 The all-new Subaru Forester has been unveiled at this year’s New York International Auto Show. This fifth generation compact SUV is the fourth model from the Japanese marque to sit on top of the Subaru Global Platform, next to the locally-available Impreza and XV, as well as the recently unveiled Ascent three-row SUV. The all-new platform promises higher levels of driving pleasure, agility, crash protection, ride comfort and quietness.

Aesthetically, the 2019 Forester follows what the first two models have started — subtle changes from the outgoing model that imposes the brand’s confidence in their design. Subaru’s signature hexagonal grille is still there, along with its hawkeye headlamps and beefy fender flares with cladding.

The biggest updates, however, are the taillight configuration, rim design, and the familiar hood seen on its smaller brothers. The rear lights are now sharper than the previous ones, while the bonnet sports a scooped shape. On the other hand, the wheels feature a ‘turbine blade design’ that are a whole lot different than the V-spoke rims of the current model. While the exterior remains essentially the same, its heart has been updated significantly. Its 2.5L Subaru Boxer engine gets added power, with 182 hp and 239 Nm torque on the specsheet, comparing to the 170-hp 236 Nm torque of the current model. The updated mill is also direct fuel-injected and has higher compression than before.

The Boxer engine is still coupled to Subaru’s Lineartronic CVT, which promotes fuel-efficiency with its quicker acceleration. The car’s grille is also equipped with active grille shutters for aerodynamics and consequently, better fuel economy.

Related: Related: Here are the different types of Automatic Transmissions

The technological features inside the 2019 Forester are the gem of the all-new model. Subaru introduces DriverFocus safety tech inside, which is designed to address one of the biggest issues in driving — distraction.

DriverFocus uses facial recognition to sense driver fatigue and distraction, and can even save up to five drivers presets. The presets include seat position, climate, infotainment setting, and more.

In addition, DriverFocus works with the brand’s EyeSight driver-assist technology to mitigate accidents. EyeSight uses radar technology to anticipate road issues and ultimately assist the driver in avoiding them.

The 2019 Forester is available in three new colors in the United States: Jasper Green Metallic, Horizon Blue Pearl, and Crimson Red Pearl It’s only a matter of time before the all-new model reach the Philippine showrooms, although we’re not sure exactly when.