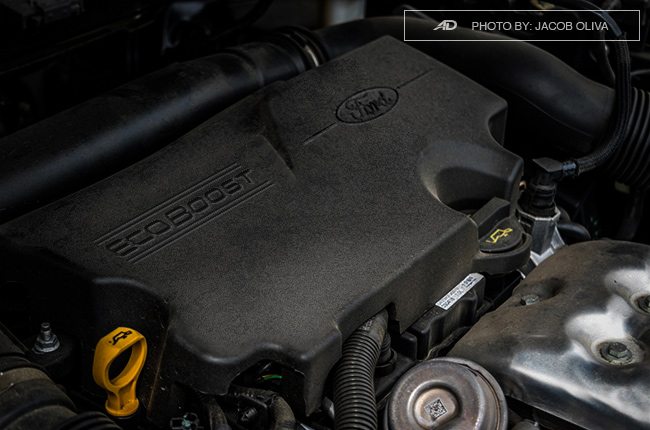 Ford is celebrating something special this month, as its 1.0-liter EcoBoost engine snatched a win in the 11th International Engine and Powertrain of the Year awards (IEPOTY). For those of you who don’t know, IEPOTY is like the Oscars of car engines just like how the World Car of The Year awards is for cars. It’s an annual competition of internal combustion engines since 1999 and is judged by a panel of automotive journalists from all over the world.

Going back, Ford’s 1.0-liter EcoBoost engine prevailed in the SUB-150 PS category (148 hp) at this year’s IEPOTY – an award it had been earning since 2012. The 999-cc three-cylinder engine from the blue oval brand produces up to 138 hp. It powers more than 1 in 4 Ford models sold in 2018, which accounts to more than 410,000 vehicles, including the facelifted Philippine-spec Ford EcoSport 1.0 EcoBoost.

Ford enhanced its 1.0 EcoBoost engine just recently to deliver better fuel efficiency. It did it by utilizing various technologies, including an industry-first cylinder deactivation system on a three-cylinder engine. As a result, there are significant enhancements to the cylinder head, fuel injection, and emission control systems, which complement the engine’s turbocharging, high-pressure direct fuel injection, as well as its Twin-independent Variable Cam Timing technology. Ford said that these enhancements will reflect on upcoming models this year.

"The 1.0-litre EcoBoost continues to set new benchmarks for compact petrol engines, even seven years and 11 awards after its first International Engine and Powertrain of the Year victory. Even with 1.6 million 1.0-litre EcoBoost engines already on the road we're still uncovering its potential. New, even more fuel-efficient electrified powertrains with 1.0-litre EcoBoost at their core are hitting the road soon.”
Carsten Weber
Ford Europe Research and Advanced Powertrain Engineering manager

70 judges from 31 countries awarded the Blue Oval brand’s 1.0-liter EcoBoost engine with a total of 145 points in its respective category. This was 26 points ahead of rival engines from BMW, PSA Group, Toyota/Lexus, and Volkswagen. Ford isn’t surprised, as it believes it kick-started the industry trend for small, capable, three-cylinder engines following its introduction.

That said, Ford is developing this layout as the basis for even more powerful mild hybrid powertrains in the new Fiesta EcoBoost Hybrid and Focus EcoBoost Hybrid. For these hybrid cars, a belt-driven integrated starter/generator (BISG) replaces the standard alternator to enable recovery and energy storage. On top of everything, the BISG enabled engineers to boost the EcoBoost engine to attaining 153 hp with the help of a larger turbocharger.