It was all systems go for the much-anticipated opening round of the 2016 GT Radial FlatOut Race Series (FORS). Held last March 5, 2016 at the Batangas Racing Circuit (BRC), this premier grassroots motorsports event saw 50 drivers vying for the top spot in the Time Trials and Grid Races.

The race weekend started off nicely as the Time Trials went underway. Dominating Bracket A was JC Baguisa with a blistering lap time of 1:49.973. He’s trailed in 2nd place by Dominique Bon who crossed the line at 1:52.305. Claiming 3rd spot was Eduardo Suiza with a brisk 1:52.982.

In Bracket D, Sherwin Bargos, JP Pacres, and Ryan de Lara went on a tight battle with just a fraction of a second separating them. Bargos finished 1st at 2:02.184, Pacres came 2nd at 2:02.642, and de Lara clocked in at 2:02.839 which earned him the 3rd spot. Meanwhile in Bracket E, Raymond de Pano blazed to claim the fastest lap time of 2:05.363. Placing 2nd and 3rd were Robert Alvarez and Ron Valerio, respectively.

Bracket R ended up with Baguisa, Bon, and Suiza repeating their Bracket A podium positions.

Finally in The Perfect Lap support race, Grupo Toyota’s John Boban and Gary Singson went head-to-head and finished the race in that order. 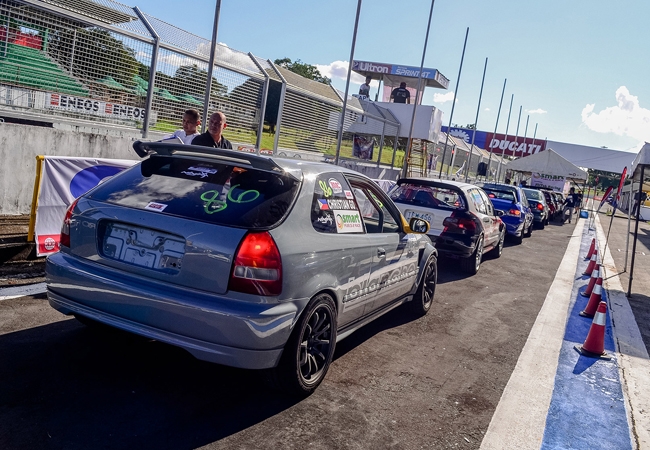 The Grid Races were given the green light in the afternoon. Placing 1st in Grid A was Suiza. He was followed in 2nd by Rafael Nicolo Fernandez. Andrew de Asis came so close to beating Fernandez, but due to a penalty following a hit with another car, he went down to 3rd. Baguisa, on the other hand, didn’t even make it past the starting line due to a technical problem.

In Grid B, Jun Cabrera won 1st place while trailing behind Nino Garcia and Paul Laurence Tan on the finish line. Why? Because the 2 were penalized after they broke out of their race times, putting them in 2nd and 3rd places, respectively. Meanwhile in Grid C, Vanni Garcia claimed 1st, Francis Telan 2nd, and Paolo Lofamia 3rd.

All in all, it was an action-packed 1st round, and things are just warming up. See the drivers in action again as the series heads to the Clark International Speedway (CIS) on April 9, 2016 for Round 2.