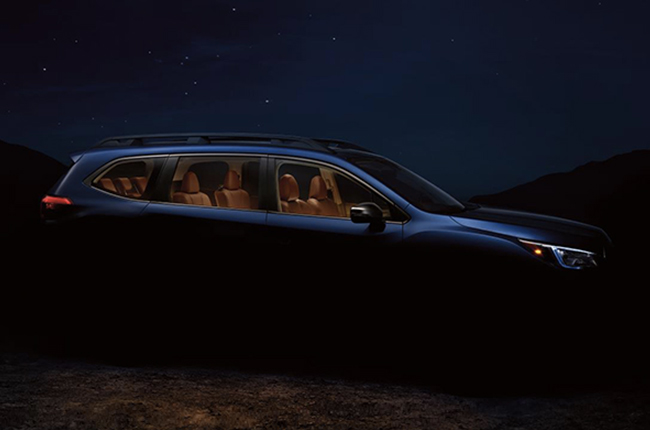 Remember that 7-seater Subaru Ascent concept from the New York International Auto Show last April 2017? It looks like it now reaches production and will be the brand’s first full-size 3-row SUV. It is, by the way, bigger than the discontinued midsize SUV Tribeca. As such, the Ascent will mark Subaru’s comeback in the SUV arena.

In a teaser released by Subaru, the all-new Ascent looks faithful to the concept vehicle that was unveiled in New York. The contour is the same, with matching roof rails and bulging fender flares that exhumes its athletic appeal. Although, the paint job is different as the production Ascent will likely wear a darker blue, in contrast to the silver concept before.

The interior of the all-new Ascent, particularly the 2-2-3 seating configuration, is also the same with the concept. It drops the white color though and replaced it with beige/khaki to match the darker blue exterior.

Underpinned by Subaru all-new global platform, the 2018 Ascent is set to go up against the likes of the Honda Pilot, Ford Explorer, Mazda CX-9, among others. If it will remain faithful to the concept, it will be powered by an all-new turbocharged boxer engine, coupled to a continuously variable transmission (CVT).

The all-new Subaru Ascent, along with the lot of its specs and details, will be fully reveal at the 2017 Los Angeles Auto Show on November 28, 2017. But don’t get too excited yet — Subaru said that the Ascent will only be sold in North America during its concept reveal in New York. We just hope they change their mind.