It seems that Filipino Fine Arts graduate, Enoch Gabriel Gonzales is on a roll when it comes to interesting designs for cars that no longer exist. If you recall, we featured his work on another Mitsubishi car, the Eclipse, and went the extra mile to provide a “Fast & The Furious” edition of the said car, as a nod to Paul Walker in the first movie. This time, Enoch has sent us some renders on the Mitsubishi Galant, which was officially in production from 1969 to 2012. 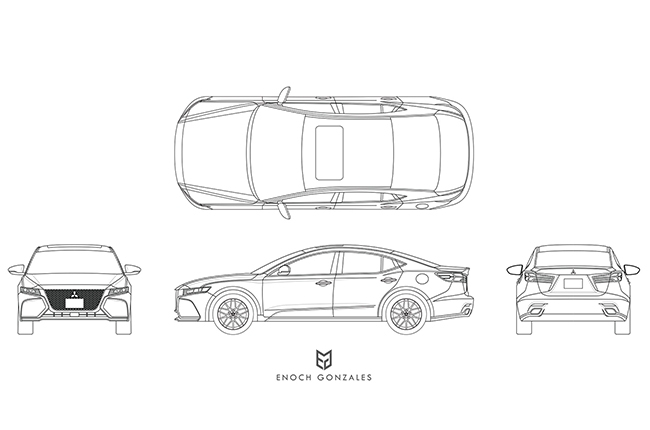 There have been nine generations of the Galant, and are responsible for more than five million sales over the world. While the Mitsubishi Galant originally started out as a compact sedan, it evolved into a midsize car by the fifth generation. More notably, its sixth generation had quite a stint in motorsport, as the VR-4 variant was the basis for Mitsubishi’s entry into the World Rally Championships from 1988-1992. The 4G63 2.0L DOHC turbocharged engine and 4WD chassis would be later adopted by the Mitsubishi Lancer Evolution, and the engine would remain in production for 15 more years. Enoch says that his basis for design was the Mitsubishi Concept-ZT, a concept car shown by Mitsubishi at the 2007 Tokyo Motor Show. The concept featured an aluminum chassis and a 2.2L diesel that produced 187 hp and 400 Nm of torque. It would be four-wheel drive and have a dual clutch transmission. Unfortunately, it would no longer see the light of day as plans for a production model ceased in 2008. Needless to say, Enoch’s designs are as close as we’re gonna get to a modern Galant interpretation.

It even carries over Mitsubishi’s Dynamic Shield front fascia, with chrome surrounding the middle portion of the grille and lower bumper. LED running lights that look to double as front indicators are found at the ends of the headlights. The side profile is similar to that of most executive mid-size sedans, and features a subtle lines and hints of chrome. The 17-inch wheels multi-spoke wheels look aftermarket, but it does add some sporting touches to an otherwise mature car. The rear gets LED combination tail lights, and the trunk even gets a little lip. Chromed exhaust surrounds and carryover chrome accents to the edge of the lights and plate holder hint at the front’s design. Overall, it’s a tastefully done car, if not a little safe. But that’s how mid-size sedans are these days, anyway. Our only question now is if Mitsubishi has given Enoch Gabriel Gonzales a call, and if they’re willing to take him on as part of a revival-of-past models development team. Enoch, if you’re reading this, can you make a VR-4 version of your render? Just to remind us of what we could have had.