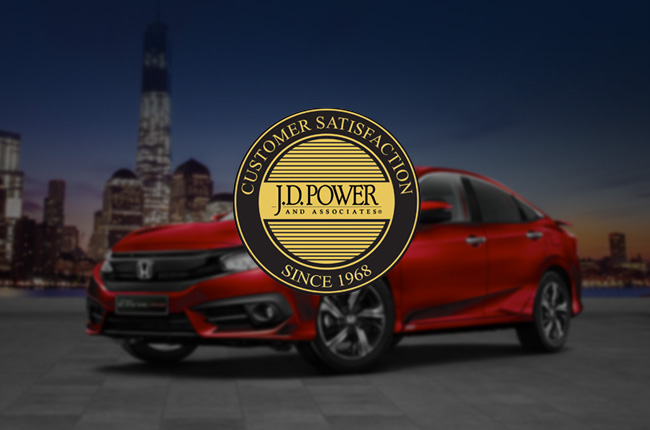 Honda Cars Philippines, Inc. (HCPI) is on a roll this year when it comes to providing satisfactory services to their customers. After ranking the highest in after-sales service satisfaction, they also topped the 2017 Philippines Sales Satisfaction Index (SSI) study — both by J.D. Power Asia Pacific, a company that surveys approximately half a million consumers in the region annually.

The SSI study examines new-vehicle purchase experience based on 6 factors that contribute to overall satisfaction. The 6 factors are (in order of importance): sales initiation (20%); delivery process (18%); delivery timing (18%); salesperson (17%); dealer facility (15%); and deal (12%).

Based on a 1,000-point system, the study covered responses from 1,650 new-vehicle owners who bought their cars from August 2016 and April 2017. These were then fielded between February and June 2017. After reigning for 3 years, Toyota Motor Philippines (TMP) was dethroned by HCPI in the 2017 SSI Study. HCPI performed particularly well in sales initiation and salesperson factors, garnering an overall score of 747.

TMP ranks 2nd with 745, which can be attributed to their exemplary performance in dealer facility and delivery timing. Nissan Philippines, Inc. (NPI) places 3rd with 743, outranking the others in terms of deal and delivery process. Overall decline in satisfaction in the Philippines

It’s important to note that there was a collective decline in the overall satisfaction among new-vehicle buyers in 2017. Among the 6 factors mentioned above, dealer facility—including exterior/interior layout and accessibility of dealerships—suffered the most decrement. The whole automotive industry was scored at 735, which was down by 32 points from last year.

These figures are quite surprising despite having more and more brands opening showrooms this year. J.D. Power’s Senior Manager Loïc Péan said that this should put pressure to manufacturers to upgrade their current dealerships and/or to open new sites to accommodate the influx of new-vehicle buyers.

Accessibility is a common issue in urban areas, but improvements may also be required within showrooms, such as improving the display of models to offer a better shopping experience as well as the efficient and timely delivery of the vehicle.
Loïc Péan
Senior Manager at J.D. Power

Another notable decrease in satisfaction was with the delivery process. This went down to 746, 20 points less from last year. Vehicle handoff time was the main culprit of the decline, as 72% of customers stated that it took more than 2 hours before a dealership completed the process.

It’s also interesting to look at how sales agent follow ups affect the satisfaction ratings of the dealerships. 25% (up from 5% last year) of new-vehicle buyers say that sales agents failed to call them back after their first visit to the showroom.

This somehow reflects how the industry works through inquiries via AutoDeal, which was reported in a survey last July 2017. According to the study, 16% of prospect buyers were still interested to buy a vehicle, even after 9 months from their initial inquiry. This shows how important follow ups are in completing a sale, regardless of how tedious it can become for the sales agent.