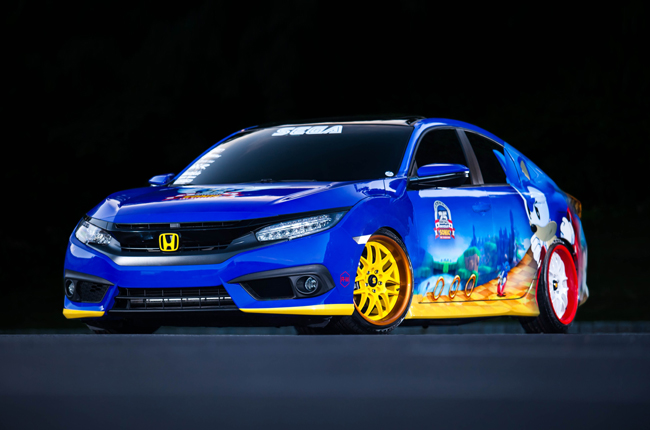 As SEGA celebrates the 25th year of Sonic the Hedgehog, Honda created a one-of-a-kind custom of their number one selling car in the US – the Civic. Conveniently called the Sonic Civic, it was revealed during the Comic-Con at the Japanese game developer’s anniversary event.

The new Sonic Civic is a custom made 10th generation Honda’s famous compact sedan that has been designed inside and out to fully embody the vibe of the classic video game. The one-off design and customization of the compact sedan was led by Fox Marketing Cars. Its paintwork is made-to-order with a Sonic Black Grille, a Candy Sonic Blue painted exterior, and Sonic Yellow accents throughout the vehicle as well as a Sonic Yellow logo. Completing the theme is the custom vinyl artwork of Sonic the Hedgehog laid on the Civic’s body

Moreover, the wheels and tires are reminiscent of the famous hedgehogs’ red shoes and golden rings that are found in the video game.

Inside, the seats are clothed in Katzkin Blue Leather embroidered with the Sonic the Hedgehog 25th Anniversary logos.

Lastly, the trunk is where the beauty of this new custom car was placed. It has a Rockford Fosgate audio-visual system that has 2 500-watt T1S2 10-inch subwoofers, 2 500-watt TM400 400-watt amplifiers, and a floor-mounted 32-inch television that can tilt up and down. The whole system at the trunk will allow you to play classic Sonic the Hedgehog games.

What better way to showcase the incredibly sporty performance capability of the 10th generation Civic than by pairing it with gaming industry's ultimate athlete – Sonic the Hedgehog," said James Jenkins, Public Relations Manager for the Honda Division.

He also added that he hopes that Sonic fans will rejoice in their new creation, the same way they enjoyed creating it.

We’re not sure if they will bring this amazing customized Honda Civic to our shores, but we do hope so since this video game is one of the classics that most Filipinos enjoyed back in the day.

For more information about the Honda Civic, visit the AutoDeal Car Guide.