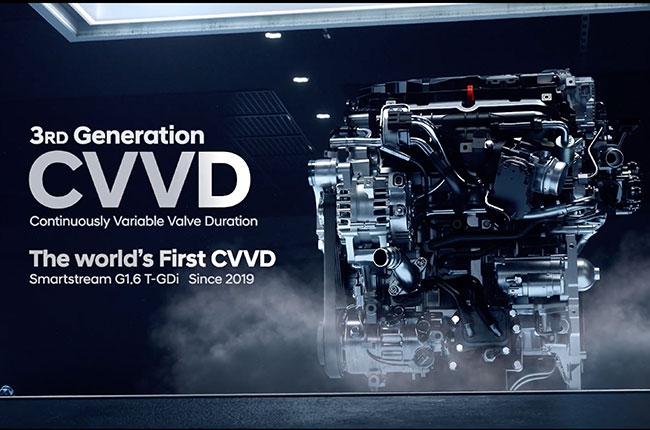 It used to be that cam shafts were just a rod with several lobes that actuate the valves of an engine, but with the advent of variable valve timing, engines became more efficient through the years as manufacturers continue to update and refine this kind of technology.

Crash course – an engine needs three key elements in order to run: air, fuel, and spark. In order to push the piston down, you need to time things correctly, camshafts and valves ensure that the air-fuel mixture to enter the combustion chamber at the right time, and leave, also, at the right time. To influence the amount of power and torque an engine makes, manufacturers have installed several technologies to influence how long an intake valve remains open to introduce more air into the combustion cycle.

Continuously Variable Valve Duration (CVVD) is the latest Hyundai valve technology to be made available soon. The company claims that CVVD can improve performance by 4% and efficiency by 5%. Because of a more efficient combustion, emissions will decrease by 12%. This technology works by having a system that adjusts how long the valve stays open depending on the driving conditions.

At a constant speed, the intake valve is left open until the middle of the compression stroke. The valve is then closed towards the very end of the combustion cycle. Reducing compression resistance enables the engine to move freely because as a piston shoots back up, the exhaust gasses have to be forced through the exhaust port, creating an area of high pressure that may hamper the piston from going up. This process relieves the pressure in this area and allows the engine to easily go through the combustion cycle.

Hyundai is introducing the new valve-timing technology in its newest car, the Hyundai Sonata Turbo. The model will come with a 1.6L CVVD direct injection turbocharged motor that will produce 180 ho and 264 Nm of torque.

Since it is no secret that Hyundai owns the Kia brand, we can expect to see this engine in upcoming Kia models for the future, maybe for a crossover or even a midsize sedan that will go hand-in-hand with Hyundai’s offering.