Isuzu Philippines finally launches the Traviz – the Japanese automaker’s entry into the light commercial vehicle (LCV) market. It slots right below the Isuzu N-series and Q series of light trucks. It made its first appearance in the country last year as a concept truck as the VT02. Now that it’s here, it looks like Isuzu made the proper modifications to the originally right-hand drive concept vehicle. Not much can be said about the exterior of the truck aside from its large headlights flanking either side of the cabin. The headlights only come with a halogen reflector configuration.

Related: 15 Commercial Vehicles for small businesses in the Philippines 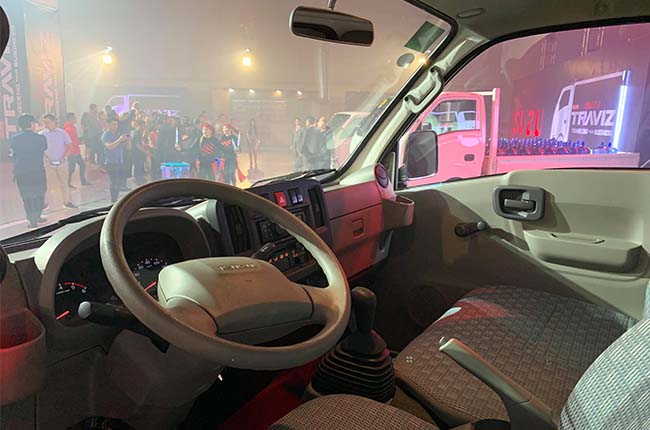 The Traviz’s interior is more shades of gray and tough plastics. While not aesthetically pleasing, it is durable which is what the vehicle aims for. The dashboard is also modern for a truck but you don’t get a lot of bells and whistles aside from a 1DIN stereo.

The seating position is high, thanks to the seats being located above the wheels. Something to note of is that the Traviz does not have an air-conditioning system, a feature that is much needed for a tropical country.  It also has seating for three people and with a conventional handbrake. The Traviz comes with two chassis variants both of which utilize a modified Isuzu D-Max chassis. The first is the Traviz S which has a 2,250mm wheelbase. Next is the Traviz L which has a longer wheelbase of 2,400mm. The vehicle features a payload of 1,660 kg for the short-wheelbase version and 1,655 kg for the long-wheelbase one. Having the cab over the front wheels allows for more space at the rear of the vehicle. With more space at the back, multiple body options can be put on the vehicle.

Under the hood or rather the cab of the Traviz is the Euro IV-compliant 4JA1-L engine. If those letters look familiar, it’s because it was the engine of the Crosswind AUV that has been brought up to environmental standards. It produces 77 hp at 3,900 RPM and 177 Nm of torque at 1,800 RPM. The engine can be had with a floor-mounted 5-speed manual transmission.