Bermaz Auto Philippines, Inc. (BAP), the distributor of Mazda cars in the Philippines, had a special surprise in store for Miata fans during the launch event of the Mazda6 turbo sedan and naturally aspirated wagon. As the night progressed, Steven Tan, the president of Mazda PH, mentioned that he invited several members of the Miata Club of the Philippines. The question of why club members were invited was quickly answered when a little orange roadster rolled into the room: The 30th Anniversary Mazda MX-5. Only 30 units of this car will be allotted for the Philippines. A total of 3,000 units of this edition will ever be produced by the Japanese brand. While the Mazda MX-5 RF Cup already comes at a premium, the 30th Anniversary Miata will cost even more than the highest-end model. Coming in at P2,990,000, the price tag is enough to almost buy two base model MX-5s here in the Philippines. Good luck getting your hands on one, especially in a manual transmission. While only 30 units will be brought in, less than 10 of them will come with a manual and Ohlins suspension. Automatic variants however will come with your standard suspension setup found in other MX-5s. So what makes this so special? Apart from the aforementioned Bilstein suspension, both the automatic variant and the manual will receive these items. First and foremost is the gorgeous orange color that this little roadster comes in. Notice that the orange theme can be found all throughout the car, and how it is reminiscent of the orange found on the 787B race car back in the day. You can take that exterior color and splash it all over the car to make this edition truly special. The front and rear calipers are matched to the body color. The fronts also receive a set of Brembo brake calipers. The wheels are manufactured by Rays Engineering, and it's a forged multi-spoke wheel finished in diamond dark gunmetal with the words “30th Anniversary” engraved in addition to a Mazda center cap.

The body features some extra aero bits in the front, other than that, hawk-eyed onlookers may be able to spot the special edition badge that adorns the driver’s side of the car just by the outline of the door. 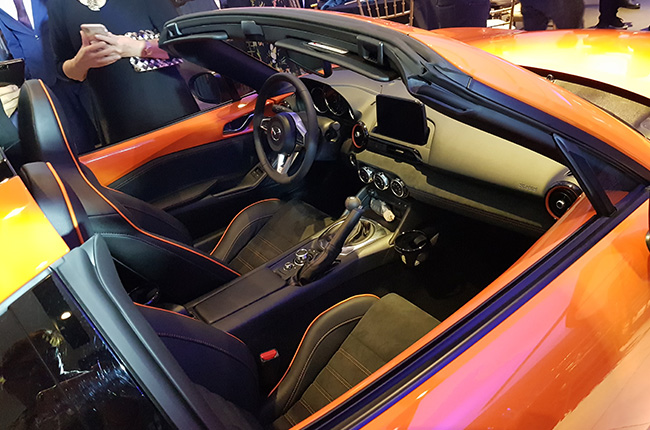 It’s a roadster, but with a hard top. Everything that we have come to love with the RF model is still present here, albeit with a different interior which is laden with orange accents all throughout. The seats are a pair of Recaros similar to the ones found in the Cup variant; the difference is that you can see orange piping outlining the seats. What is surprising is that the aircon vents also sport these orange trim pieces that are perfectly matched to the exterior paint. Orange stitching is present everywhere in the interior to give this MX-5 an integrated look inside and out.

No other specifics were released by Mazda PH. These units might as well become collectors items in the future, so only a total of 30 lucky owners will get to either drive these cars or store them away for safekeeping. Either way, it is a gorgeous model that will turn heads even at the sight of its bright orange paint.