From engines to cabin features, cars are rapidly transforming into electrically-powered machines that may entirely no longer require fuel soon. With this said, more and more features inside our favorite cars are no longer what they used to be. In short, manually-controlled components, like the parking brake, are now electronic and this make enthusiasts cringe. Ford Performance came up with a band aid to the wounded hearts – the Drift Stick. Internally called as the Project Wicked Stick while being developed, this aluminum lever is a rally-inspired handbrake. Don't get your hopes up just yet as it is electronic in itself. The deal here isn't about whether or not this thing is electric, but rather, this cool feature lets you manually perform a drift just like how you do it in a legit rally/drift car.

“The passionate engineers at Ford Performance are also enthusiasts. Everyone here is encouraged to think outside the box, so project ‘Wicked Stick’ was born. Our engineers will leverage the learnings from its development for many future products for Ford Performance and, ultimately, take back even more of an innovative spirit when they rejoin our mainstream engineering teams.”
Dave Pericak
Ford Performance global director

The Drift Stick was developed by the same team, led by John Wicks, who are responsible for the Focus RS' Drift Mode. Located between the driver speed and the shift stick, the feature utilizes the Ford Performance all-wheel-drive system, as well as the anti-lock braking system. It works by opening up the rear-drive unit clutches and applying hydraulic pressure to lock the rear wheels, essentially needed in drifting. 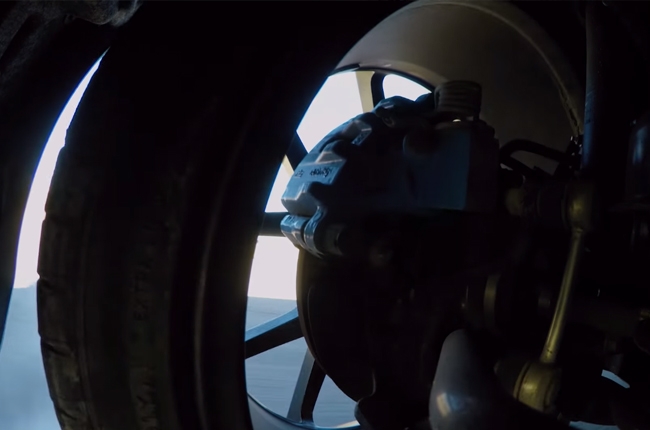 To showcase the full potential of their innovation, Ford Performance has sought the help of Gymkhana YouTube series' Ken Block. The professional rally driver drove the rally-race-bred Focus RS around an abandoned area, where he burns and screeches the car’s tires. He even testified that the Drift Stick made the Focus RS "even more fun to drive," considering the car’s deep pledge to rally-racing.

The Drift Stick is not a hydraulic handbrake. Rather, it’s an electronic device hooked on your car’s system, so calibrating it only requires a USB cable and a computer. By doing this, you can run its diagnostic data, do some modifications, or upload powertrain calibrations for the car. Other advantages of the Drift Stick include less force on pulling the lever, unlike a conventional hydraulic brake wherein you need to put in extra pulling force. It is also easy to install and simple to remove, as it is only attached by bolts and nuts. Furthermore, it is compatible to be the car's professional calibration tool, too.

If you want to use the Drift Stick, first, you should own a Focus RS. Second of all, you should start getting involved on the track now, as it is only intended to be used there. If you’re qualified on both requirements, you may order a kit starting December 1 at a converted amount of P51,334 (though you might need to add extra for shipping). A kit includes the lever, mounts, and circuit board with professional calibration functionality.