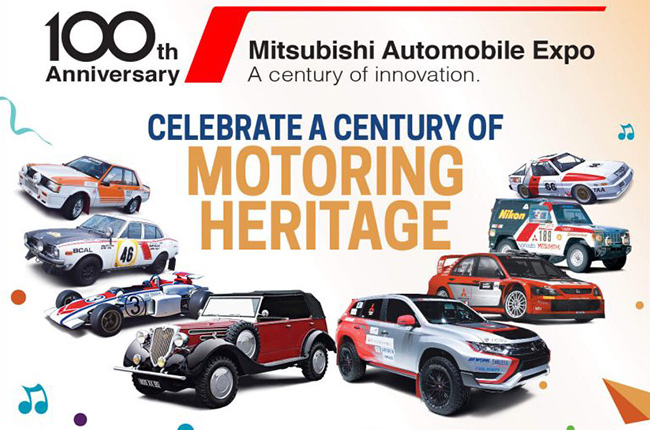 Mitsubishi is celebrating its 100th birthday in the automotive industry this year. The Japanese automaker started its business in 1917 with the production of the Model A – the first to ever bear the 3-diamond emblem. The 22-car production grew during the period of the 2nd world war, which paved the way for the establishment of Mitsubishi Motors Corp. marque.

With this, Mitsubishi Motors Philippines Corp. (MMPC) wants to celebrate the special occasion with a 4-day grand centennial motor expo. The celebration will be on June 8 to 11 at the World Trade Center in Pasay City.

Included in the expo are iconic and rally cars from Mitsubishi's historical past. Some of these cars are the 1937 Race (Circuit Car), 1985 Paris-Dakar Rally winner Pajero #189, WRC Lancer 2005, and the 2015 Bajaj Rally winner Outlander Phev.

Speaking of history, the event will also let the visitors know about the company's roots and a chance to see the actual vehicles displayed at the Mitsubishi Auto Gallery in Japan.

MMPC's current vehicle lineup will also be present in the expo, including Fuso trucks and bus lineup. Visitors may also test drive the Montero Sport, Strada, Pajero, and Mirage. Not only these, visitors may also witness the current roster of Mitsubishi's pure electric vehicle test units, such as the iMiEV and Outlander Plug-In Hybrid Vehicle (PHEV). Test drive activity is from 10 a.m. to 6 p.m. only, so try to go as early as possible.

Aside from the display and test drive activities, the whole family may enjoy live performances from popular OPM bands and DJs. Meanwhile, on June 10 (3rd day) Mirage ambassadors Maine Mendoza and Alden Richards, together with Internet Action Star Ramon Bautista, will drop by to greet the event-goers. Mitsubishi loyalists and car clubs are also invited to gather for the 1st Mitsubishi Owners Day.

MMPC also guarantees that kids won't get bored in the event. Tapped shows from Nickelodeon will be aired to conduct fun games and other activities. Nickelodeon's Paw Patrol will also make a special appearance on June 10 to 11 (Saturday and Sunday). In addition, an art workshop will also be conducted, led by the father of Philippine Art Workshop Fernando Sena.

Aside from the fun activities, a Safety and Driving Etiquette Seminar will also be held during the 4-day event. The Mitsubishi 100 Years Anniversary Expo will be open to the public from 12 p.m. to 9 p.m. on June 8, and from 10 a.m. to 9 p.m. on June 9 to 11. Admission is free.