Fans or not, this piece of Porsche info is a welcome development. The German marque officially announces the production of the Mission E electric vehicle (EV) concept. However, it wouldn't be called just like how we got used to calling it. Porsche is giving it a production name, and it sounds like a creature from the movie Underworld (Lycans) – Taycan.

According to Porsche, Taycan (tie-kahn) roughly translates to "lively young horse." If you haven't looked closely at the German brand's logo, there's a stylish horse at the center, under the name 'Stuttgart,' where the company was founded. So, how did Porsche come up with the name? We haven't talked to anyone from the company but we have some kind of a hunch to justify it. 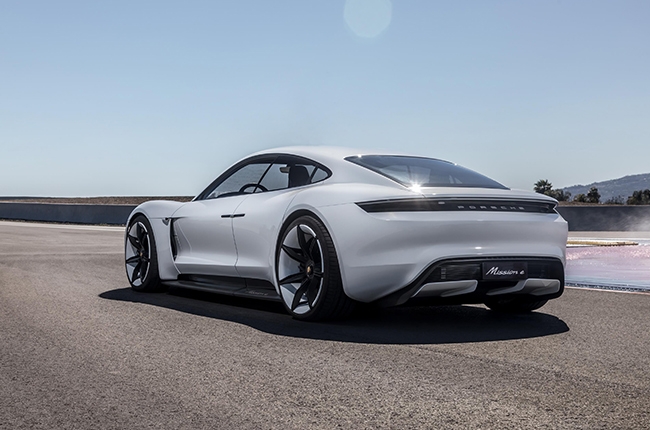 Analyzing it deeper, the word 'lively’ could pertain to it being electric. Meanwhile, 'young' kind of makes sense, too, as this is its first fully-electric car and 'horse' hints us that it isn't something to mess with; basically, because horse translates to power when we're talking about cars. Tesla?

“Our new electric sports car is strong and dependable; it’s a vehicle that can consistently cover long distances and that epitomizes freedom.”
Oliver Blume
Porsche AG Chairman of the Executive Board

When it comes to nomenclatures, Porsche has this pristine taste in calling its vehicles. For example, Macan is the Indonesian word for tiger, Cayman means sharp and agile, Cayenne translates to fieriness like the pepper, and Panamera was inspired by the Carrera Panamericana long-distance race.

Now we know what Taycan means, how serious is Porsche with it? Does a budget of six billion euros sound serious enough? Well, the German automaker decided to double its original three-billion-euro plan in electromobility by 2022.

In the additional three-billion-euro budget, the 500 million euros are designated for the development of the Taycan, while around one billion euros are for electrification and hydration of existing product range. The total budget is inclusive of allotments for expansion, technologies, charging infrastructure, and smart mobility. To make it clear that it’s totally going extra for the project, Porsche designated an exclusive area for the Taycan at the Stuttgart-Zuffenhausen headquarters, as well as a new paint shop, conveyor bridge, and final assembly bridge. The company also plans to invest on the Weissach Development Center, as the production of Taycan is expected to generate around 1,200 fresh jobs in Zuffenhausen.

Now, what would power a Taycan? Nothing less than two permanently synchronous motors (PSM) which can put out over 600 hp. It can accelerate the car to 97 km/h in under 3.5 seconds, which makes a 200 km/h track launch in less than 12 seconds. It is said to have a 483 km maximum range, as per the New European Driving Cycle (NEDC).